Hi to all
I’m looking for older firmware Hex-files to download.
I have found this:
http://firmware.ardupilot.org/Plane/
and this:
http://discuss.ardupilot.org/t/ardupilot-older-firmware-where-can-i-get-faq/7456
But here only the acual version and beta version is aviable.

I know it is possible to install older firmwares directly in missionplanner. But I want to store the files localy.

Thanks for your replays 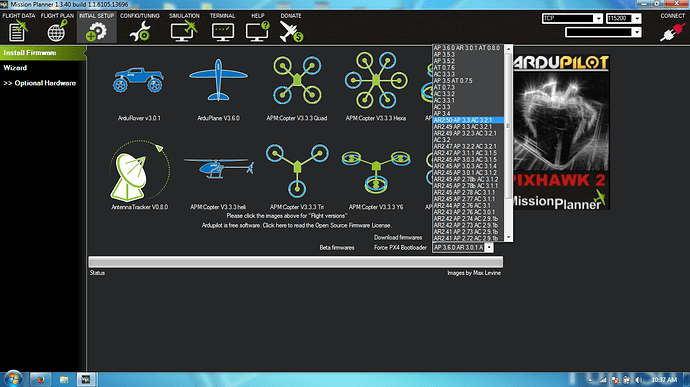 Click on a frame type and install the firmware.
After doing this , a hex file is downloaded in your Mission Planner’s directory named as firmware.hex.
So use this and save it for later use.

Thank you for you answer!
I will try it. But your solution sounds good!

Helping each other is the strength of our community.

I tried it. It works only if the APM is connected. Otherwise I get en errormessage:

Anyway for me it is fine. If my APM is connected via USB then I can upload the files an I find the hexfiles. It takes some time, but this is ok.

I’ve just tried to
download a few firmwares to my APM.

But unfortunately it doesn’t work at all. After
downloading I deleted the hex-file to be sure it is not always the same. I
still can install firmwares to my APM. But there is no new hex-file in the MP
folder.