Octocopter spins with no stick input

I have a DJI S1000 octocopter powered by a Pixhawk2 running APM 3.4.6 and Mission Planner 1.3.48. When I take off in Stabilize mode, the copter starts to spin constantly on the yaw axis with no yaw (stick rudder) input. The compass has been recalibrated many times and appears to be working. I ran an experiment where I just gave it throttle with no yaw, roll, or pitch input from my RC controller. Even with this, the copter inherently spun.

The second plot shows that the desired yaw changes with a neutral input on RC4 (rudder/yaw). The red line is RCIN. You can see the peak at the beginning is the arming it since you can do that with the RC controller. Then it flatlines before being disarmed. Essentially, with this red line you can see we didn’t give it any yaw commands, yet it still yaws as you saw in the first plot of desired and actual yaw.

I see similar behavior in LOITER and ALT_HOLD modes.

Does anyone know why the desired yaw changes with no stick input.

Are you using an external magnetometer? Does the magnetic heading change if you throttle up with the copter tied down?

Andre-K: After looking at the Pixhawk motor diagram, it appears incorrectly connected motors may be the problem here. The picture below is what the Pixhawk is configured to be. We have the Octo X configuration. 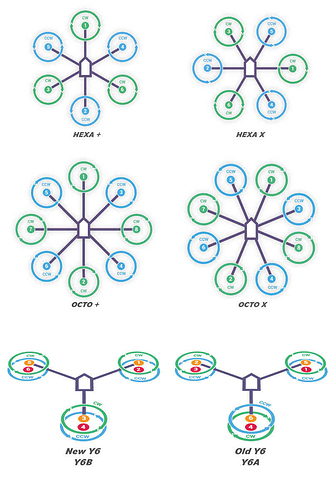 image.jpg800×1200 128 KB
Now, if you look at pg 8 in the DJI S1000 manual, you’ll see CCW and CW motors are switched compared to the Pixhawk diagram. Our wiring is correct, it’s just the arms need to be switched.
http://download.dji-innovations.com/downloads/s1000/en/S1000_User_Manual_v1.00_en.pdf
This appears to be the error, and we are about to go test to confirm. I will return with the results.

kd0aij: We have an external magnetometer, but we have left it unplugged because the mount has a little play making the magnetometer inaccurate. Also, I do not think the magnetic heading changes if I throttle up.

Yes, so the issue was as Andre-K stated. The Pixhawk and DJI S1000 frame have different motor setups along with convoluted wiring schemes, so note to anyone who has the same issue, take extra precaution when setting up these two systems together.