Not able to Arm

For a while I’m working on setting up the ardupilot.
Whenever I do not have the ability to arm the board. I try for many times to ush the throttle stick right and down (5 sec) but i wont do any thing. I already searched for a certainement para meters but i could find it.
For this check i switchs off the Arming checks so they cant be the problem ?

So i connected the board to the reciever but i dint connected the esc’s ? is that possible ? I hope somebody can help me out, i already fighting with this thing for weeks now.

You will need to have the ardupilot plugged into a computer running your Ground Station, APM Planner, Mission Planner, QGC, etc.

On your Flight Data screen you should see messages in Large RED letters telling you what is wrong and why it won’t arm.
Also in the Messages tab on that screen will be similar information.

A few more details on what hardware and software you are running would also help anyone help you.
What ardupilot board?
What version of firmware have you loaded?

Thanks for your reaction,

On my screen it doesn’t give a message, only that it isn’t armed.
At the moment i am using the amp 2.6 in combination with a ORX receiver and transmitter.
The radio calibration was done and seems right. In the picture you can the setup. At that moment i had a good gps fix. 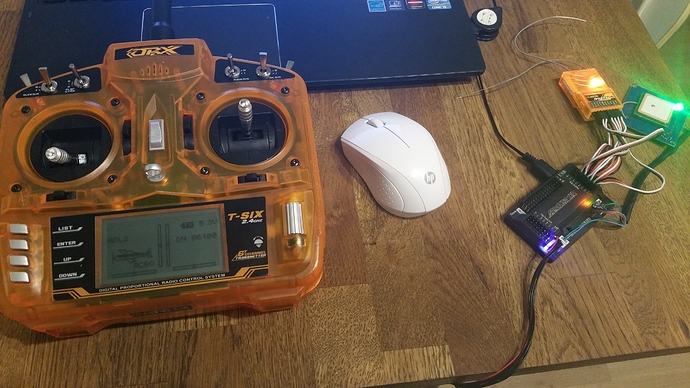 Hope somebody can help me out

I was referring to the screen of the computer.
I assume you are running Mission Planner to setup and calibrate your APM.
On the “Flight Data” screen in Mission Planner what messages do you get when trying to arm?

ive found it… my rudder was in reverse.
I was trying to make a video in order to show you the case then i found out that it was radio

Thanks a lot for your support already ! can i send you a message when i run up to the next challange ?