No green bars on Mission Planner

Hello, I’m trying to Check the Transmitter’s Setup (https://ardupilot.org/plane/docs/common-radio-control-calibration.html) but no green bars appears and i don’t have any idea of what i can do to solve that. I have a beaglebone blue, mission planner 1.3.70, futaba receiver, T2M Radio Pilot 6X 2.4GHz mode 1 T3424 with the T2M mini receiver T3424R. I have a signal from the receiver. Does anybody have an idea ? 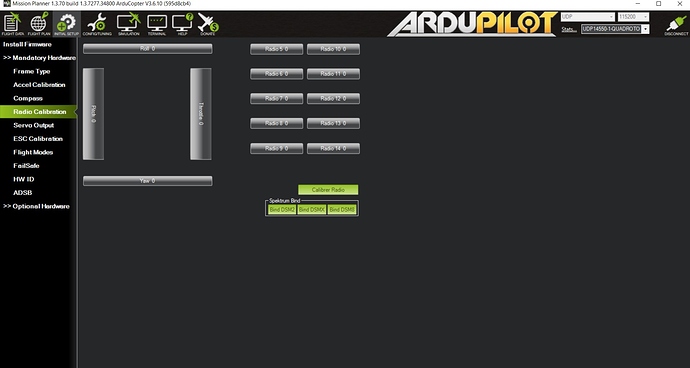 Looks like your RCIn in not configured properly, likely in hardware. What signal is your receiver outputting to the pixhawk? Is your transmitter thinking that it is paired to the receiver?

Hello
The transmitter is well connected to the receiver. In fact, when the commands are varied, a change in the signal (PPM) is observed with the oscilloscope at the receiver output.
However the receiver is connected to a PPM / SBUS encoder because the BBBlue only takes SBUS and at the output of this one observes a bit flow with the oscilloscope but difficult to say if it varies when we do vary orders. Is it the encoder?
The encoder is connected to a power supply on one side (5V) and only the signal wire is connected to the card because the 5V port of the BBBlue was not active.
Maybe the SBUS port is not active either?
Sorry for not responding earlier, I was very busy.