Need Some Advice! Using an APM on a quad powered by 6S lipo

I have run into a series of misfortunes trying to build and fly a quadcopter equipped with a three axis gimbal for aerial video shoots. Initially, I built a Tarot 650 Sport, powered with T-Motor Navigator series MN3420 motors which require 6S power. I had several good flights, but then one day the motor rpms wavered and suddenly the aircraft fell out of the sky and crashed.

I never really definitely determined the cause, but I read about possible ESC damage that can result from mounting the ESCs close to the motors and having long power/ground leads - this can cause voltage spikes due to the switching action of the ESCS. I did mount mym ESCs under the motors, so I decided to try a new build, but this time I would mount the ESCs on the cetner chassis.

I built a Tarot 650 Ironman, using the same motors (they were undamaged except for one which I replaced. I mounted the ESCs under the chassis. The first test flight went well, but the second flight, the motors suddenly stopped and again the aircraft fell out of the sky and crashed. I suffered a brownout, according to the log file.

On both aircraft, I used an APM power module to supply power to the APM but since I was using OPTO ESCs I decided to use a Castle BEC to makek sure that the receiver got power - I plugged the BEC into one of the vacant ESC input ports. Could using two power sources be the cause of my brownout?

I want to try once more. I have ordered a new frame, another Tarot Ironman. I will use 40 A OPTO ESCs again, but an APM power module that can handle up to 10S input voltage. I plan not to use a BEC but let the receiver draw its power from the APM via the APM output ports to the receiver.

If the aircraft flies okay, I will install the gimbal, video transmitter and use a separate 3S lipo to power the gimbal and transmitter.

For a start, if you’re spending all this money on frames, why not spend a bit extra and get a Cube or similar 32bit FC instead of the old APM?
I have many APM’s operational but they are tricky to setup on large frames with a lot of manual parameter tuning required. You have autotune but only in 2 axes.

If you are using an APM power module, or even the standard Pixhawk power module, they are only rated to 4S and so it was not surprising that power failed.

I would recommend that you power as much as possible from a BEC and allow the power module to just drive the FC. In some builds I have run as many as 4 or 5 BEC’s to power the different systems.

With the Cube I have the power module as the primary power for the Cube only, a BEC in the secondary power input, another BEC runs the peripherals such as Radio, Telemetry, Rangefinder, ADSB, etc., and another BEC running the 12V systems such as the Gimbal.

Be sure that you have additional weight added for your test flights that equals your payload weight. 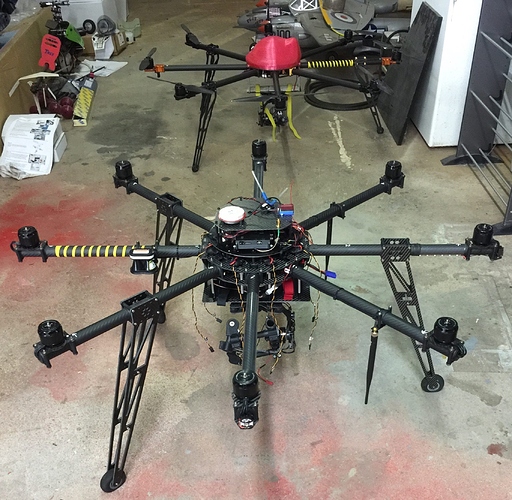 @FossilRider post logs of all failure flights you mentioned

Thank you for your feedback. I’ve been using the old APM because my need have been rather modest and have been met using this older F.C. and I like using Mission Planner. Regarding the power module, I was aware that they are good only up to 4S but found some others that are advertised for higher input voltages, such as this: Holybro 10S P.M. They claim that the current sense goes up to 90 A which I could exceed if I goosed the throttle close to full power, but I don’t expect to do that as this will be strictly a flying video platform - no high performance flying.

However, I will consider using another F.C. such as the cube. All I want is a stable reliable flying platform!

As far as flight testing goes, my plan is to first test fly the aircraft w/o the video transmitter and gimbal/camera - once I’m satisfied that it’s flying well, I will add the additional equipment, being mindful of maintaining the C/G in the center, and retest, adjusting trim and tuning as necessary.

Keith, you have sold me on using a Cube, but I have a question or two. I have already ordered the APM Power Module that supposedly can accommodate up to 10S power - can I use it with a Cube?

Also, I am thinking of using a UBLOX 7M GPS/compass - again, my needs are rather modest and would like to use stuff I already have as I wasn’t expecting to put out so much more for a new F.C.

What are your thoughts?

You’re best off with a Ublox 8 series GPS. Worth the extra $. You should be able to use the APM power module with the cube without issue. I can’t speak on their reliability though. The cube kit comes with a perfectly good power module that I’ve been running on 6s for a year now without issue.

Thank you for the information! I will wait until everything is delivered before I make my decision as to which P.M. to use. I really like the idea of having redundant power and I hp that using the cube will hep me have a reliably flying video platform. I will look into using a 7M GPS as well.

So, I’ve decided to go with a Pixhawk PX4 controller and instead of using a wiring harness to distribute power to the ESCs I’ve decided to use a MATEK FCHUB-6S pcb as I can use the onboard 10V to power my Tarot T4-3D gimbal, VTX and use the 5V to the OPTO ESCs to initialize their circuitry upon power up.

To power the Pixhawk, I selected a Holybro 10S APM Powoer Module which is advertised as accommodating up to 10S power. This lead me to wonder about my previous brownout power failure. On that aircraft I used an APM Power Module that supposedly accepts 6S power, but actually visually looks the same as a generic APM Power Module. So, I’m wondering if I was really given a 4S power module that failed after a couplel of flights…

When I was configuring the previous Tarot, I went through the motor/compass calibration with no problems - I used a 6S lipo to power the aircraft and used the telemetry link to Mission Planner. Also, later, when I was ready to fly the aircraft, I did a static thrust test, where I tied down the aircraft, armed and throttled up the motors - all seemed to go well. So I took it out for its maiden flight - took off in Stabilize and exercised pitch, and roll; switched to Loiter and yawed the aircraft and finally RTL and it landed itself - no problems.

During the second flight, it started well, but then in a hover, the aircraft seemed to lose power and I had to juice up the throttle to maintain altitude, I then climbed the aircraft to get some more altitude in case there was another power drop so I could recover. But the brownout occurred and all motors quit and it fell to the ground.

I’m stressing about this as I don’t have a definitive cause and I want to do everything to prevent another crash like this. So I have a question - has anyone used any of these higher rated power modules to power a 6S quad withe a Pixhawk?

Here’s a pic of my power system - Power Module leads soldered to the MATEK board as well as leads for the gimbal and servo lead that will plug into an unused Pixhawk output port to supply 5V to the ESCs: