it experiences sporadic instability while hovering on the same spot - in worst situation it was a flip over roll in the air and then stable again, most often - crash, but in some situations it is perfectly stable and goes via whole autotune fine, then flies with new autotune pids, but in 30-40 min starts doing same stunts. as i keep tuning it - it may have issues of a different origin, obviously, but, in the log above - could anybody tell if you see anything more or less obvious explaining origin of the violent twitch it did around mark 35?
by the sound of motors i did not hear obvious oscillations or any issues. 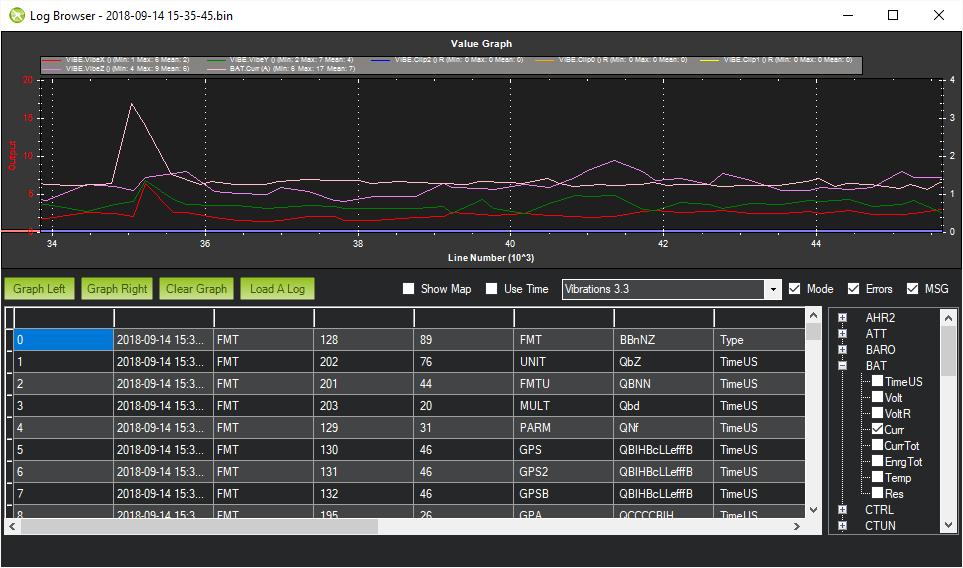 Commenting to show you no the forum is not dead. Tridge was hinting that he don’t have time to add custom offset for compass at this time. he is very busy with outback challenge. His comment was meant to say if someone has time to take it on this is what needs to be done. Sorry if I had a desire to fly quad as small as yours I would try to help with your issue. But no personal experience can’t help you much.

Your vibes don’t look bad, but is your FC hard mounted? (I saw the pic of your copter on chat)
I couldn’t get mine to fly in auto modes at all, w/ it hard mounted.
Using m3 to m2 rubber bushings and m2 screws helped, but isn’t perfect. I’m going to rebuild it when I get a new ESC, and I’m not going to use bolts at all. I’ll bolt my camera and ESC to the frame, but then soft mount the FC on the top of the stack, like a traditional pixhawk. Using double sided tape and vibration damping material (foam or gel).

Oh, I just realized your imu is soft mounted on that FC…

What flight mode are you in when it happens?

I’m not on my computer w/ MP and can’t review logs, so I can’t really see what’s gong on w/ yours (and I’m not great w/ logs, so probably won’t see anything)

yes, it is tricky. i have a slightly bigger model that is now very stable and well tuned - a 20x24cm. this one is 16x20cm.
i was able to make autotune complete with a set of brand new props on, what i find odd is - vibrations on new props and old props are almost same, yet, there was an effect.

doing post-autotune flight i had model again to do a flip over roll axis once. i will post log later.

this is a kakute f7 FC - its IMU sits on a soft pad. i can try to put it on a double soft pad - but i am not sure it is vibes that would cause a flip over roll… i did not get something like that yet - such unexpected sudden twitches. usually you can hear by the motor sound if something it not OK - here it was not evident to me, at all.

Yes, I realized that right after I posed… That’s a nice feature of that FC.
My vibes looked mostly OK. They were definitely in the acceptable range. I watched the vibe readout in MP as I was setting things up, and it always stayed in the green, below the first line on the display. But, the copter was randomly jumping up and down, and moving from side to side… Fast short bursts of power. It never flipped though… just very quickly repositioned itself.

It was auto modes that did this. Stabilize worked perfectly.

so, here are 3 logs - one is the log with an autotune process. then a sample flight right after autotune. then a flight with all modes tested, model thrown around - it had issues and a flip.

this middle log i think has a twitch of flip around mark 80 - during very stable normal flight. it is not ok.

what i had - in the first log on top of this page - a clean lift off in alt hold, steady normal sound from all motors, visually all fine, then it had a sudden twitch almost 45deg down then self corrected back to original position.

scary part of that is - previously several times, during such a twitch instead of a self-correcting back drone darted sideways, having close to 40A going to motors instead of 8A at alt hold loiter. it can seriously hurt - so i am trying to understand the origin of the problem first

i started tuning at having them at 0.03, and ATC_RAT_RLL_D post-autotune did not change and remained at minimal possible 0.001. i am not even sure anymore if autotune works well on a model of such size. but last result is flying ok.

You need to change your minimum acceptable D for autotune…

Well, I’m not going to be a lot of help…
To me, it looks like in your first log at the top of the page, the FC commanded a change, and the motors majorly overshot the command. It also has those ERR EKF CHECK’s, which are often caused by vibrations.
On the middle flight of your 2nd set, it looks like at about mark 52 it rolled, but was not commanded to do so… Then the FC can be seen over compensating a little bit the other direction… That could be some sort of mechanical or ESC issue. That might explain the overshoot on the first log, too. More strange stuff at around mark 85, but I can’t tell what’s happening…

I’m looking at ATT DesRoll and Roll to see this.
When you’re in loiter or pos hold, the PSC logs are good to look at too. TPX and PX, etc.

A lot has changed w/ the logs though… I haven’t really dug into the logs for a few years, and all the parameter names have changed…

looks like at about mark 52 it rolled, but was not commanded to do so

quite a fun thing it is, when stuff happens without being commanded to.

yep, it is quite an interesting fact. i has altered the autotune, will try to rerun it during weekend or next week. odd stuff.

In both cases I saw something strange (the overshoot and the uncommanded roll) the copter dropped to the same side. So, you should be able to figure out which motor that is, and look for issues there. (I dont know which direction that fall is, by looking at the logs, but I’d imagine it’s documented somewhere)

My best guess is you sometimes have vibrations (the sharp command in the first log), and maybe a mechanical/esc issue (the overshoot and the roll). But again, I am not great w/ logs, so I’ll be quiet now.

ESCs and motors are fine as it flies just fine if i flash betaflight into it. for now i placed second strip of foam under IMU. will see if it will make any improvement. the goal was to see if kakute can indeed be mounted flat to the shell, or if it will not be able to work reliably without rubber mounts, no matter what. will see.

the problem with this roll over and twitches is - i see no significant vibrations that would be or could be considered a trigger to this, so it probably got to be something else. and i also had similar twitches, but much less pronounced, on the slightly bigger model, as i recall now, but it has dissipated by itself. 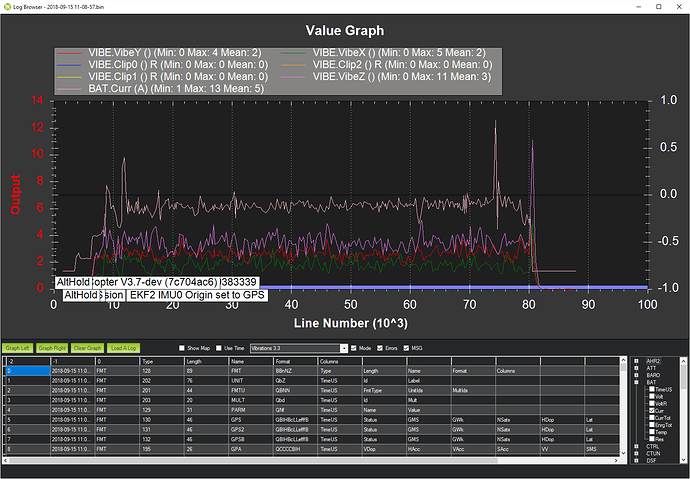 so, above is the sample of the cleanest log so far with this BS happening. top line is current - the first spike in it is when EKF sets origin to GPS, heck with it. then it was in alt hold - hovering fine, sound of motors fine, it is with double padding under IMU - i am surprised to see X vibs are now a bit up but Z and Y are down.
the mysterious twitch happened around mark 72 - is clearly visible on the current spike there.
https://drive.google.com/file/d/1mzSWk8eiC36hClaWu8nbjOIMUmH-CcSH/view?usp=sharing 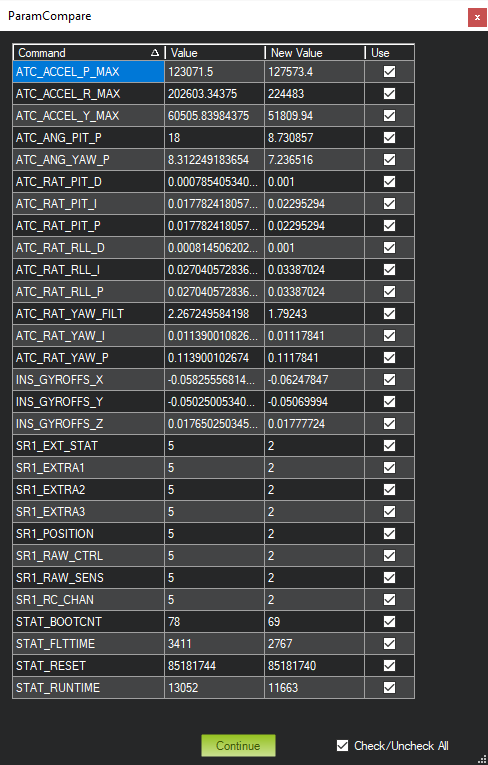 pretty interesting values it got now after new autotune. _P in area of 0.02 and a _D in 0.0008. flies ok, but still occasionally twitches.