I am now starting to dive into ArduRover for a zero turn mower.

The mower will be delivered this afternoon: a Cub Cadet ZT2 54.

Do you mower automaters simply remove steering arms and the like and automate, or have you allowed for easy manual mode, to use the mower un-automated (normal)?

Or is it too complicated, cumbersome, expensive to have both modes?

I am asking, as ATM, I am thinking that some areas are too difficult to “mission plan” and need a manual mow.

Max, it would be very easy to incorporate a quick disconnect on servo linkage such that they could be physically isolated from manual controls. The potential downfall is that most Hydro Gear transaxles have heavy springs for operator “feedback” because the drive linkage is so easy to move. You either have to accept that your manual “feel” will be touchier (by removing those springs) or you have to use very powerful servos or actuators.

I strongly prefer servos because they tend to respond faster than comparably priced linear actuators.

A master power switch on the autopilot electronics takes care of the rest of your concerns.

As for me - I had designs of having a convertible system like you describe, but quickly ended up removing the seat and control arms in favor of a completely automated mower. I just use the RC controller to “manually” drive around the tight spots to clean them up.

Thanks… makes sense, and how it is going to be.

I have to renege on this statement.
Given the current accuracy that can be achieved, I seemingly have to stay away from fences by about 18 inches, maybe 10… which requires a cleanup job along 1.5 miles of fence lines.

Jordan are you going to build an autonomous zero turn mower? If so join us on KevinG's Autonomous zero-point turn Lawn Mower - #247 by jason_miller

Several people are building the devices there and collectively as a group we will help you get started.

Thanks Steve! I have read the posts and will start the automation process on my 72" Ferris.

Feel free to reach out with questions.

As far as manual and auto operation you will find most have either removed the manual controls or pick servos that have low enough torque that can be overpowered by a human.

My guess is you are in the same situation I was in. You need the mower for manual operation to get you through until the autonomous portion is installed and you want to be able to use the mower if the electronics fail, you want to use the mower manually for sensitive areas like around a garden or pond, etc.

My suggestion is to adopt the same plan Steve and I have adopted during our builds. Design your installation of the servos so it is easy to mechanically/manually swap between the servo and factory control levers.

I am able to sit on the mower and control it similar to using the factory control levers but when I get on a steep hill (risk of rollover) or around the pond (risk of slipping into the water) or under pine trees (droping needles and sap irritate my skin) I can now get off of the mower to stand where I am safe and control the mower.
This approach might be a great place for you to start. It makes it really easy to add the flight controller, GPS receivers, lights, obstacle avoidance sensors and such later while you are still able to mow the lawn manually albeit from a remote controller.
Think of modern day automobiles where the gas pedal is just a sensor that sends the position to a computer. The computer determines how far to open the throttle plate (for a gas engine). This approach is similar in that you are converting your mower to drive by wire.

There are a few things to keep in mind. If the servo gets stuck in a position other than neutral on the transaxle the mower could run away so I recommend adding a way to shut down the mowers engine remotely meaning don’t just bypass the safety switches and leave them that way. I understand your desire to get the mower doing the work for you. Been there done that.
I have tested in an open area; if I have the remote control sticks in a position that causes the mower to move and power off the remote control transmitter the mower will continue to move even without the RC signal.
For now I am controlling the seat switch to shutdown the mower.
I am going to add a secondary way to disconnect the servos from the RC receiver and the flight controller that ends up connecting the servo control signal to a fixed PWM signal that should return the servos to the neutral position on the transaxle in addition to shutting power down to the engine in my case (diesel) fuel shutdown solenoid.

My suggestion is to adopt the same plan Steve and I have adopted during our builds. Design your installation of the servos so it is easy to mechanically/manually swap between the servo and factory control levers.

My suggestion is to ‘electronify’ the controls.

I did some further thinking after my initial post, and decided to replace the controls with electronic controls (servos), after contemplating different options.
Since you need servos to electronically/remote control the mower, why not get rid of the mechanical controls altogether, and replace the latter with knobs of sort.

This is the prototype which will replace the mechanical controls: 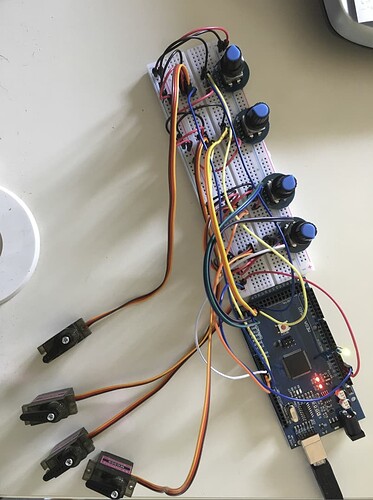 The knobs are rotary encoders, left, right hydrostat, throttle and gas.
The controller is an Arduino Mega. It has enough inputs to cater for all security switches, etc.
The little servos are just proof-of-concept, and the outputs of the Mega will drive power electronics for the big servos. Only two big ones are needed for the hydrostats; accelerator can be a small one; and choke can be a small one.
This arrangement allowed for an auto-cold-start function based on engine temperature (sensor added). I also added a oil pressure sensor, and tank level sensor.
I retained the starter key; however, the throttle knob has an integrated push-button function which triggers the starter (either key or push button can be used).

This functions all by itself, and is totally separate from any automation.

However, input signals from the automation side can be read to signal to the servos what to do.
The safety switch functionality has been retained, but the logic is software, based on safety switch input (seat, control arm position, deck on|off)

The rotary encoders for the hydrostats will be replaced with magnetic angle sensors, with the magnets attached to the control arms.

A single switch will change the mover from auto to manual mode.

Instead of retaining another initial idea of adding a few relays into the wiring harness to switch from manual to auto, I also decided to remove the original wiring harness with a new one, which is much simpler, as it does not need to follow elaborate (yet genius) routing which are mainly representing safety circuitry.
Choosing this route allows for the mower to be reverted back to factory state in a matter of one hour.

Thanks Jason. I am realizing I am in over my head, but am progressing anyway!

I think I will try the RC controller for the tight areas around the fences and trees and see how that goes. I will also attempt a quick conversion - I think its possible with my mower and existing linkages.

Safety is a must and will be learning about kill switches, live video/audio feeds, and eventually would like to add a Jetson Nano for obstacle avoidance and other AI features.