SV started making a weird sound and so after inspection found one pinion/prop shaft had developed excessive lash. The fix was to make a double layer masking tape shim and attach to the bottom of motor so that when mounted in the frame it put a bias on the gear end towards the prop gear and tightened up the mesh. The pinion gear had started to wear in the middle so had to slide it approx. 1mm further down the motor shaft
. 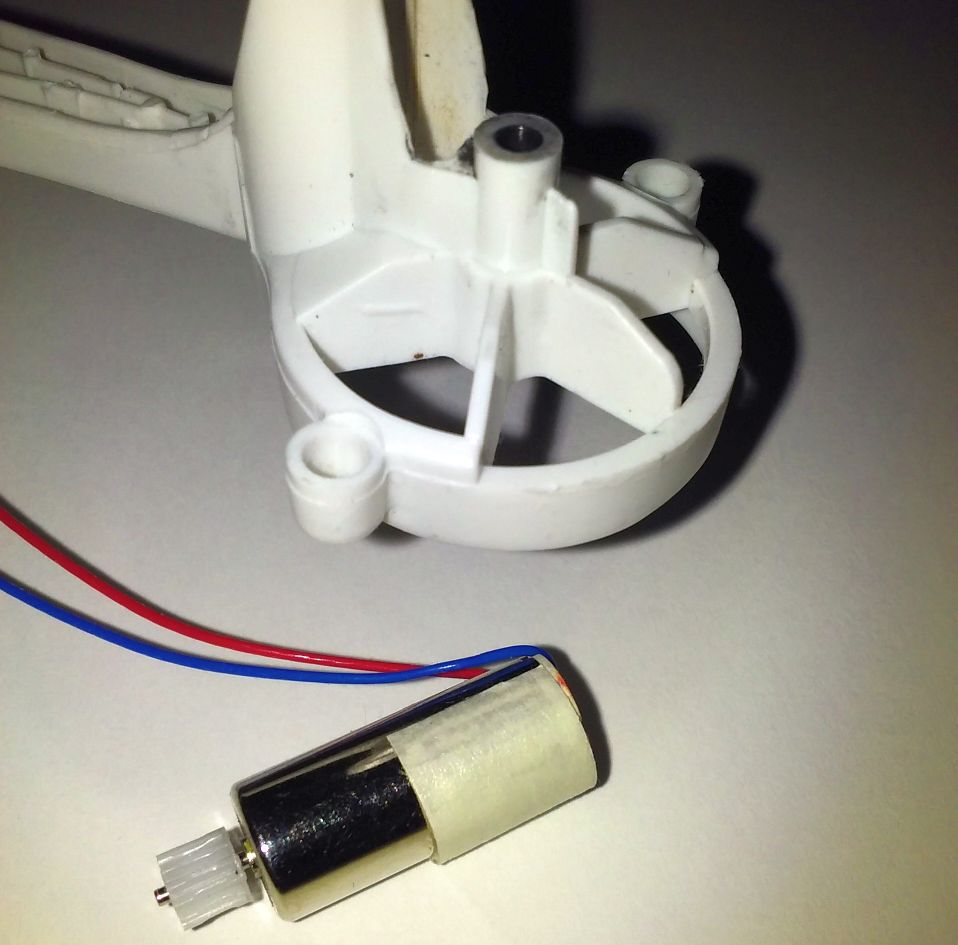 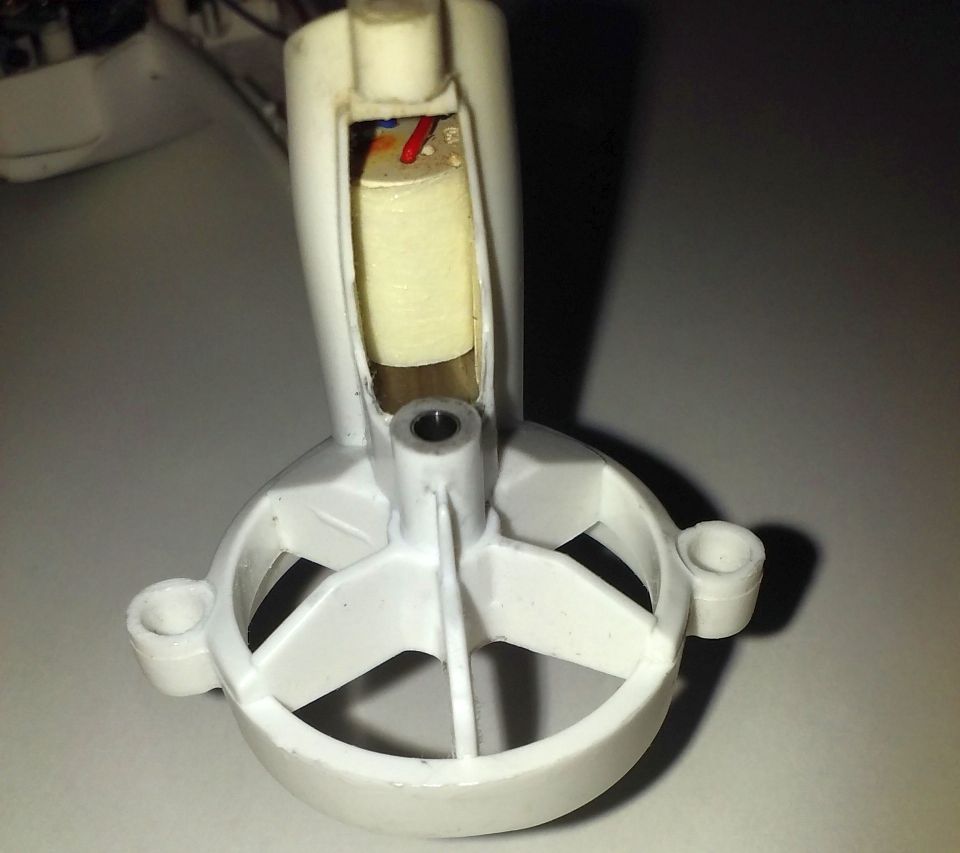 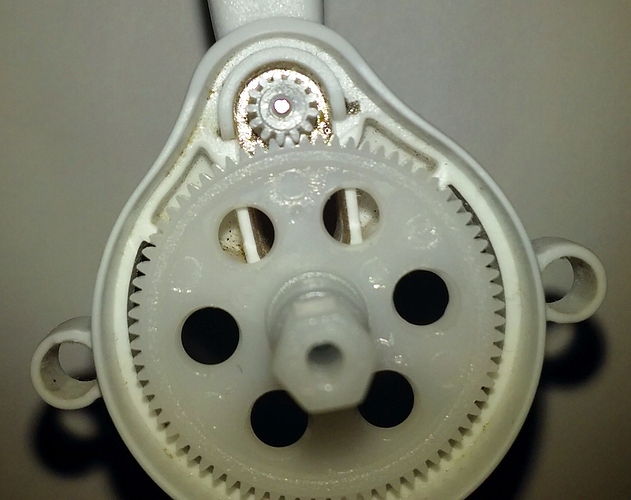 Bonus:
While in there I lubed the prop shaft and bearing with grease using a FREE dosage syringe from my local grocery pharmacy. 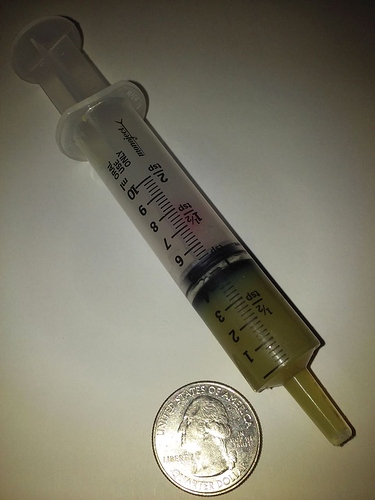 Something else I’ve found . . . the factory applied grease is clear and rather thin and it gets thrown around the inside of the gearcase and when it does it’s black which tells me the metal propshaft or bearing is wearing prematurely which can lead to excessive gear clearance. I now use marine grade grease and it stays in place better and isn’t slung around.

I used graphite. A little messy, but works well

I just installed bearings to stabilize the big gear. 2x5mm. Holds the prop shaft steady instead of it flopping around in the oversized bushing. Drill 5mm hole deep enough to accommodate the bearing and shorten the bushing accordingly. Be careful, once the drill bites into the plastic it will want to pull into the plastic quickly. I used a hand drill, but recommend using a drill press if you have one. The drone is much quieter now since the gear slop is eliminated. Go to AvidRC.com for bearings. $1.00 each.

Would using the flanged version make the hole depth a little less fussy or doesn’t it matter?

I bought flange bearings since they were cheap, but decided against using them. There was nothing to gain and installing standard bearings is straightforward. The flange bearing sets to high. It should work, but there’s little clearance under the prop gear.

Good to know.
Thanks!
I think I might try bearings too. I suppose it might even increase battery life by a second or two if the friction and vibration energy loss has more effect than the tiny weight difference.

Has anyone found replacement prop shaft/80t gear? The factory unit is so soft. A slight tweak can induce a cascade failure, likely due to vibrational noise in addition to slight power loss of that motor. Bearings are a must, thanks. Also, I have had to reinforce the frame, which appears to be getting soft after ~3.5 hours flight time and is not perfectly flat (thrust alignment). Will post pictures of my solution but, with spares lacking, is it time to take the SV brain and move on?

Any idea where to find the 1mm bore / 4mm diameter pinion gears for the motors for the 2450? I’ve looked everywhere !!

When they are available, they come with the motors.
http://replacementparts-skyrockettoys-com.3dcartstores.com/2450-GPS-Motor-and-gear-set_p_143.html
Unfortunately, it has this on the site: Will not be restocked after next restock . However, I believe the small pinion on the journey is the same size as the 2450, but the large pinion is not.

The small pinion is 13T so you can search google for parts.

Ya I’ve looked into sky viper and know what you’re saying. I’ve been waiting 3+ months and wasn’t very nice in my last email . I’ve not even heard back from them… I’ve checked other sites and nobody has a 4mm. However- Somebody had to make them. Lol. Thanks for your reply

I ordered the motors And board for the Journey. I’ll post whether they’re the right pinions. I found the big gears for It

Ok. Here is what I have decided to go with … I want to use the electronics from my 2450 and build my own … My Q is what all do I have to do to make it brushless and what size frame should I use … These things started as toys to me But has become a serious hobby and would like to end up someday as an aerial photography business

I also realize that I need better than sky viper

Honestly, my guess is that was the exact reason ArduPilot was excited to partner with Sky Viper. To get people into the hobby, and interested in AP.

And magically pull the rug out from under them………

There…fixed it for ya! lol

That’s what happened! One day I was buying a “mass market” priced drone that I was less likely to lose…
…and now I find myself trying to hack a DJI OEM f/c (Lite implementation?) to see if it is possible to make it play nice with Ardupilot. You folks have been so helpful with the SV, which I continue to “play” with, that I thought I’d ask around, (if appropriate). Or look for suggestions as to where I might research. Thanks se
Still looking for main gear/shaft for the v2450. Limited flying’s the result. Hence the query.