Mismatch between number of CAM messages and number of images

I am doing Survey (Grid) on Mission Planner. I am not getting an image with each CAM message so am then not able to geotag the images using Mission Planner’s"Georef images".
I am using CHDK to trigger my IXUS 125HS camera and have tried both “DO_DIGICAM_CONTROL” and “CAM_TRIGGER_DISTANCE”.
I’m not sure if the issues comes from the camera or Mission Planner.
Any ideas would be appreciated.

the issue will be with your camera. most likerly the images are being requested to fast, and the camera cant keep up.

once you flick into auto the plane/autopilot and camera are the only things control the number of photos, MP does not control any of this while you are in the air.

OK. Thanks Michael. Makes sense.
I’ll try flying a bit higher, a bit slower or bit less overlap. It’s an interesting puzzle to get good ground resolution and cover more ground and not have issues like this…

I finally went to a camera with a hot shoe. This allows you to record when the camera fired instead of when the autopilot wanted it to. No more freaking out after hitting the pre process and getting a cam message discrepancy lol!

Can definitely see the advantage in that. How do you record the camera firing and the coordinates when it fires?

Found where you are trialling it.

You’ll find it in the camera triggering section. Feed 5 volts from the power rail to the hotshoe adapter with a 1kohm resistor dropping the voltage to the signal wire. Set your digital input to low, not high.

It’ll be very appreciated if you help me get the hotshoe to pixhawk wiring diagram like.

So the setup for Mission Planner is here: http://ardupilot.org/copter/docs/common-camera-shutter-with-servo.html#enhanced-camera-trigger-logging . And the wiring 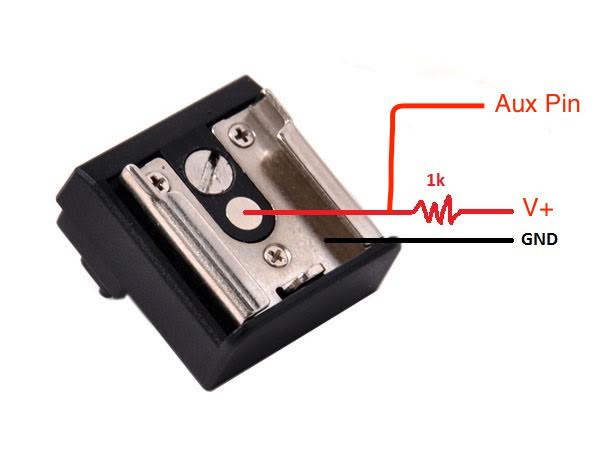 Hi Michael, I increased the time between photos and found that at just over 3 seconds I am reliably getting an image with each CAM message.
However, the images do not match the coordinates. There seems to be a delay between the CAM message and the image capture. If I plot the coordinates from either the CAM message or the exif file from the geotagged images and compare it to the image there is a difference of about a few seconds at the start of the flight and 10 to 20 seconds at the end of the flight. The end of flight was quite obvious - it was taking the last few images after completion of the mission while returning to launch.
Do I need to increase time between photos further or is something else going on here?
I am using CHDK to trigger my IXUS 125HS camera and was using “DO_DIGICAM_CONTROL”

Stop torturing yourself lol! Do the enhanced camera trigger. Unless your camera doesn’t have a hot shoe…

Advice straight from the heart. I like it. But didn’t I see that hot shoe is at this time supported on Plane but not Copter?

Rejoice! It’s supported on Arducopter 3.4! Not to worry about it being beta, I’ve been using it for work from it’s first release.

Except I don’t have a hot shoe on this camera so still interested on what my issue is… Will go back and look at camera settings unless someone has a suggestion.

Did a flight with approx 5 seconds (was 3) between images and finished up with a much more accurate orthophoto. May be able to bring that time back some.