Can you post an image of your setup? What size quad props are you using?

I didn’t realize that you were using H-frame instead of X-frame so it’s the same two motors but they are spinning CW instead of CCW. It shouldn’t matter.

On my X-frame setup below, the two CW motors (blue and yellow) increase RPMs and the two CCW motors (red and green) decrease RPM to make it turn one way (around the 32 second mark) and the opposite around the 40 second mark. It’s a piloting habit I have gotten into to verify that I have yaw control.

I can’t remember why the two front motors are working slightly harder than the two back motors. It could be balance or wind.

There’s a picture of my plane in this thread, posted on Oct 17, 2019.
https://discuss.ardupilot.org/t/mini-talon-quadplane-conversion-cont/38840/66?u=rogerr

Greg,
You indicated that you think I’m running a Q_FRAME_TYPE of H?
I set it up for X and just checked my params…which show a “1” which is X.

I also just found this statement in the Ardupilot "Building a QuadPlane Guide:
Due to their greater mass and surface area, most QuadPlanes do not have as robust YAW authority as compared to small quadcopters. It is extremely important that the motors be very well aligned, as just a few degress offset can sometimes effectively eliminate the ability to yaw in one or both directions. In fact, this effect can be used to actually increase yaw authority by purposely tilting one or both pairs of adjacent rotating motors in the natural direction of their torque 1 or 2 degrees (inward for H frame, outward for X and + frames).

I could redesign and reprint the motor mounts to provide a degree or two of outward tilt.

You indicated that you think I’m running a Q_FRAME_TYPE of H?

Sorry, I got my 1 and 3 setting reversed. I am running H-frame and you are running X-frame.

Thanks for the pic link. It looks like your booms are shorter than mine, which could affect yaw authority. I can’t tell if you have the 5 degree forward offset for better transitions to forward flight.

Haven’t you hover tested this before? Was this the first time it started spinning?

It would be interesting to re-test and verify that your yaw works properly. You could hover low, say 5 meters, in QLOITER mode (so it won’t drift) and move the yaw back and forth with the sticks. It would also be a good time to test the Q_WVANE_GAIN setting from 0.1 to 0.4. If it’s windy, keep it mostly pointed into the wind.

I made the booms fairly short to minimize wind resistance in forward flight. I knew that would reduce roll authority, but didn’t realize it would impact yaw.

I’ve done a fair amount of hover testing previously. The plane has started circling before, but in the absence of significant wind, I would just wait it out and eventually the circling would stop. Pitching forward also seemed to help.

Back in the air today for some quick testing. While having low wind (3-4 MPH) is generally a good thing, it didn’t blow hard enough to allow a complete test. However, small steps can be beneficial.

I made several changes.

However, I believe that only the first (and possibly the last change) was significant in today’s test. All of the quad motors stayed far away from their limits during flight. In particular, the left rear motor on channel 6 significantly reduced it’s relative output compared to the other motors:

image.png1364×468 23.6 KB
Now the two rear motors are significantly below the front motors in output at almost all times. This seems like it may be reasonable due to CG and quad boom placement.

Now the big question. Did this work to fix the yaw authority problem? My answer is that it seemed to help, but more needs to be done. I felt that I was controlling yaw well most of the time…but at least once or twice the plane started to turn due to wind. It never went a full 360 while doing this, but the wind was very light.

I suspect the trick in reading ATT Des Yaw (red) vs ATT Yaw (green) is that the Desired Yaw should lead the Yaw…not vice versa. Roll and Pitch lines are at the bottom (brown and blue)

I believe I probably need to re-run the yaw autotune since I’ changed the motor mount. And perhaps I should angle out the front motors a couple of degrees each.

Now the two rear motors are significantly below the front motors in output at almost all times. This seems like it may be reasonable due to CG and quad boom placement.

During the 1st half of the turn, desired pitch and actual pitch were about the same. Mostly up at about 8-10%. Just before apogee, the actual pitch falls toward zero and desired pitch increases…briefly at 25%, then 16% falling to ~11% after a couple of seconds. This coincides with input from me on the rudder (edited this to rudder on 1/15-it used to say elevator). Actual pitch bounced around a bit, but averaged around zero until going substantially negative at the last two seconds of the turn (-9.4 degrees at peak). And the plane was losing substantial altitude.

With some input from a friend, I figured out why this happened. The V-Tail is angled at about 45 degrees. This means that when the plane rolls into a turn at 45 degrees, one V-tail surface is perfectly horizontal and one is perfectly vertical. Effectively, one vtail looks like a horizontal stabilizer with an elevator and the other looks like a vertical stabilizer with a rudder.

So…if I power up the servos on my plane, in manual mode and hold it in my hands:

Thus, the rudder stick, instead of commanding more yaw becomes an anti-elevator control (when the plane is banked 45 degrees and is commanded to have full pitch up). It does nothing for yaw.

In FBWA mode the behavior is the same.

So, I can see why my attempt to tighten the turn by adding rudder failed (I’d use the term “spectacularly” except that it barely avoided a crash). Adding rudder fully cancels any elevator up pitch and lets the plane head towards the ground.

Is this just an indication that the Vtail for a Mini Talon is just too small (or the control surface on the Vtail) for it to turn well?

I would post your question here on the RC Groups thread for the MT. The FPV guys fly them like they stole them but I keep things more level in FBWA or CRUISE modes.

I posted the question at https://www.rcgroups.com/forums/showpost.php?p=43603411&postcount=16121.
I also made a significant change in my original post on the topic above. Changed the word “elevator” to “rudder”.

It seems that because you mentioned it was a QuadPlane, the assumption on that thread was that it is an APM issue. Perhaps you can simplify your question to be about v-tail planes in general. That would be the first major breakdown of your issue. Is this expected from a v-tail setup? Or is APM adding some unwanted effect?

Well, I am having a horrible time with my MiniTalon conversion…
the conversion:

The problem is that it will not hold YAW and has almost no YAW authority…its an X frame Quad setup
The motors (output 1 corresponds to Motor4, 2 to Motor2, 3 to Motor1, and 4 to Motor3) are trying very hard to yaw the plane left (M1/2 higher than M3/4) overall while the plane is generally not yawing…see below…so much so that average is barely enough to hover (`1750) but the motors are close to the saturation limit and cant be raised further…
indicates an big imbalance somewhere right? 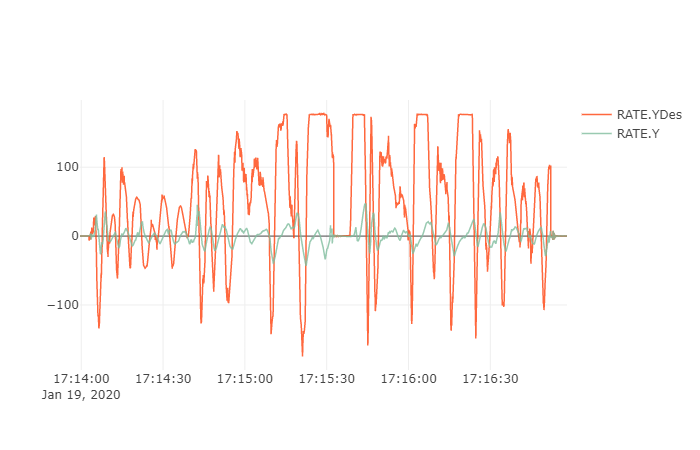 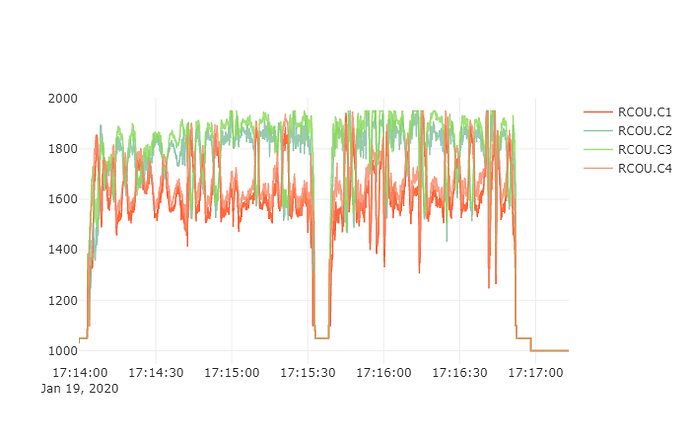 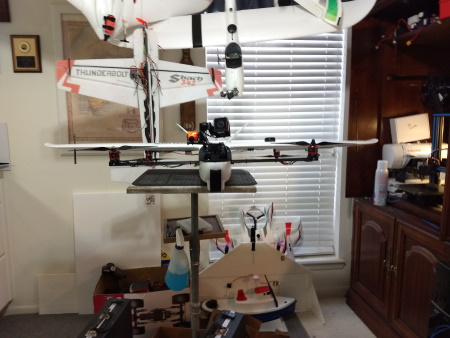 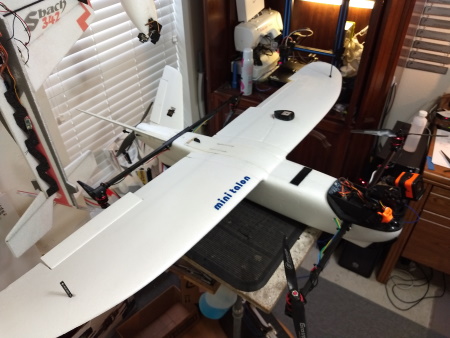 PS most of the yaw demand is me trying to keep the nose wander contained to a few degrees, I am inputting it via rudder stick…but hardly any result as you can see…and the M1/M2 motors are just honking to try to turn it hard left…again without much effect

Your QuadPlane setup should have plenty of yaw authority so I suspect something basic is wrong. It acts like the motor rotation directions don’t match the H-frame mixer, but the graph shows the two clockwise spinning motors (Servo2 (Function 34) and Servo3 (Function 33), 1 and 2 on H-frame) are running faster than the counter-clockwise motors which suggests it is trying to compensate the rotation.

thanks Greg…its an X, so M1 and M2 high (RCout2/3) means it trying to turn left, hard,…they are counterclockwise rotating…if yaw rate desired is positive, meaning it wants to have clockwise (right) rotation, it should just lower M1/2 and raise M3/4 which it doesn’t…I even tried setting frame type to H for grins…of course its just worse…
and its the same on 3.9 or 4.0

You’re right, I always get that reversed. My Q_FRAME_TYPE is set to 3 and yours was set to 1.

A VTOL or copter needs a good compass without interference for direction when hovering. What if we test the compass? Can you use only a single compass and place it temporarily higher as an experiment?

Its a 405-wing, external compass only…in gps…12 inch away from any power leads…I dont think its a compass thing…the key to me is that going from 0 to a lot of demanded clockwise yaw rate has no real effect of the hard left the motors are being driven to…PID gain can affect that (it does a little, tried 4X on yaw P, as well as eliminating totally the YAW headroom param which limits total average throttle max )…again with no real impacts…also checked VIBs…they are low…

although overall power shouldnt matter, only affecting climb ability, I have ordered SS2216/1250s to run with 8-9" props…that will double the available thrust while adding 80gr to the weight…should hover at 35% or so…maybe that will work…shouldn’t matter, but will try it…

This is first time for me setting up a quad (even if it is a plane).

1.I did qautotune on roll axe. I am not sure it did a good work. How can i check it? What are the parameter key to look at in .log file?
2. Than i was going to autotune on pitch axe. I wanted to do it in qloiter mode but i found it was not really good at maintain position. Could you please help me read the .log file and tune it better?

Plane is a mini talon with quad racing motors and 4in1 blheli_32 esc.

EDIT: this is the only way for me to upload a file. I can not upload it directly. https://gofile.io/?c=Wj5r2W

changed motor mounts to eliminate any possible alignment issues by mounting flat on the carbon tubes…and upgraded to SS2216/1250s (dont think that was the issue, the mounts must have been)…first transition and flight
todo:
experiments with motor mounts to add back in the 6deg forward tilt to reduce flight drag and increase hover lift in wind , also want to try 3deg “tilt inward” to increase yaw power of motors…those thin gruapner props cant be producing a lot of torque

That looks much better, congrats! It sounds like you have some angry hornets aboard with those smaller props. I’m using a Multistar 4s 10C 8AH pack (22.5oz) in my MT without issue. I love the way the MT flies like it is on rails!