hi guys!
this Mini osd issue has been put in many forums but it’s still has not been solve ,hope get a good luck this time

I fly sky suffer X8 installed pixhawk and osd.my problem is the OSD data disappear after take off ,but if I push the reset button in the Mini osd after land ,the osd data appear again .I found the problem is the OSD will disappear when push the throttle to full power in the ground test .I guess it’s the power droup in mini osd. the power supply of the osd is from two stage ,the 5V side is from pixhawk which is about 4.85(it should be 5V,but I don’t know why ,maybe it’s the error of the multimeater ),and the 12V side is from video transmitter which get the power from the battery .I check the 12v side voltage when I push the throttle to up ,the voltage is unstabe .
in order to find out the problem I try two way.

First ,I put a UBEC in the 12V side of the OSD ,and ajust to 12.02V(Itry to ajust to accuracy 12V,but it’s really hard to do that ) ,when I power the airplane ,the out put of the UBEC is keep in 12.02 very good ,I didn’t get ubec in the 5v side of osd ,because it’s really hard to put a ubec in the 5V side,meanwhile the flight control provide a very stable output of 4.85V when increase the throttle .I don’t think this osd issue is cause by the 5V side power ,because if it’s cause by 5v side ,why the osd still overlay in the Ground .but this way can’t fix the isssue

secound ,I buy another osd and set to just power from 12V side .first I didn’t installed the UBEC,the OSD data work sometimes,But most of the time it’s disappear ,then i installed the ubec and set the output to 12.02V ,the osd data appear most of the time,but still disappear intermittent .it some times disappear after take off but the osd data overlay again after several minis in the air .

I have google this issue for a long time ,some people said it’s because the mini osd is very sensitive to voltage drop ,I do agree with that ,but do any body fix the issue ,we can’t provide the perfect voltage even with the UBEC.

I had a similar issue but pretty much resolved it by providing a separate 5v feed to the MinimOSD.

hi rollys, do you use ubec to provide stable 5v or just supply 5v from flight control？

I use a separate UBEC.

Give it a separate bec or attach it to a high amp bec. also tie all grounds to ground. Some versions of the OSD like the Minimosd micro can be real silly about grounding and power. 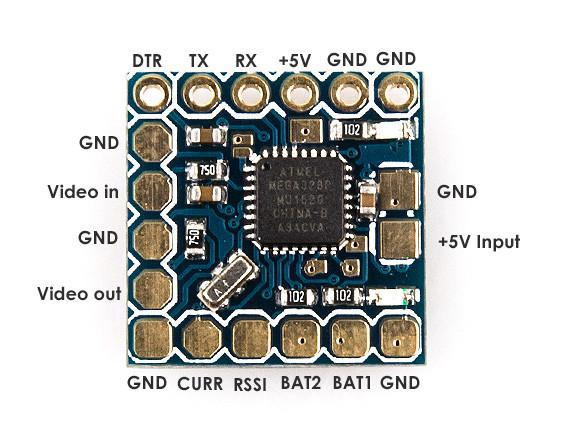 i really don’t like mini osd, the board is much sensitive to voltage, I spent a lot of time on it, but I can’t fix my problem. are there any osd that can replaced the mini osd？I have usd two separate ubec, one attached to servo rail to get 5v，the other attached to 3s battery which feed the video transmitter, then the video transmitter out put 12v feed osd, but there strange thing is that the input side of transmitter is 12v even i increase throttle, but. the voltage of out put of the transmitter is the same as battery voltage, for example, the battery voltage will drop down if I increase the throttle, and the voltage of transmitter input side is stable at 12v，but the output of transmitter will drop down. it’s really hard. to fix this issue.

There is a different version out that is much more stable.

The Micro MinimOSD is the next evolution of minimization. The Minimosd was engineered to bring users a very powerfull OSD at a unreal cost. After all the community mods, we re-engineered the OSD so every useable pin was easy available.(no more sur


I have used it myself and prefer it. Not saying to buy it from here…just this version is available. There is another version but I can’t find the link at the moment.

I use these now and love them
https://furiousfpv.com/product_info.php?products_id=420

There is also this one. I have never used it before
https://www.virtualpilot.co.uk/index.php?route=product/product&path=60&product_id=51

hi rickyg, thanks for the advice. I have buy the MW OSD, but I don’t know how to flash the firmware. it seems the code is free, but the GUI is cost 1.99 euro.

actually I have buy the GUI, It just send the GUI download link without register key,i push the flash button in the GUI, and select the device,version etc, but it can’t download the online firmware, I try to download the firmware from github, but it’s the same, the firmware can’t be download. I’M not sure the down load still valid.

so could you send me the front and the firmware for MW OSD or provide other advice？my device list below:

thank you very much!

Good Morning
if you bought one of these

The Micro MinimOSD is the next evolution of minimization. The Minimosd was engineered to bring users a very powerfull OSD at a unreal cost. After all the community mods, we re-engineered the OSD so every useable pin was easy available.(no more sur


You can flash it with Minimosd and not MW OSD. Minimosd is free MW OSD isn’t compatible as far as I know with Pixhawk and Arudplane.
xingxing (xingxing) January 6, 2019, 1:49pm #12

I had flash mini osd firmware first, but the over lay still disappear after a while, the mw osd was power directly from telecom2, which provide above 4.83v，not exactly 5v。the voltage is ok if it’s above 4.8v according to manual，so I didn’t use UBEC. and I put a lot of time to flash MW OSD for pixhawk successful today,I haven’t connect to fc to check the valid, hope MW OSD Firmware is not so sensitive to voltage. 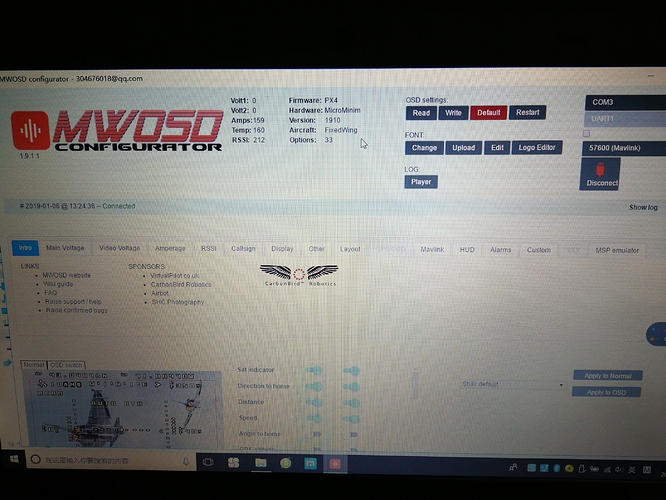 Until you provide separate 5v power to it, you’ll just continue to have the problem. @rickyg32 already proved that 20 days ago.

thanks rolly,I try to get the 5v power from hobbywing ESC which have a 5v output. normally the 5v output is connect to channel 3 of pixhawk as backup power, so I try to add a split servo line which means the 5v power of the ESC can send to the pixhawk and the osd the same time. Is that ok？can I get the clean 5v in this way？

If your talking about pulling the 5vdc off the esc yes that would work. I will warn you that esc’s can be noisy and introduce lines in the video.

Generally I just use one of these units to power the OSD…but the ESC will likely work.
The main thing is power it separately and make sure all the grounds are tied to ground. Flash with the Minimosd firmware…the firmware isn’t the issue when it comes to voltage. It’s the hardware. It’s not very forgiving.

Who does like it? I like the newer OSD functions in Ardupilot that support integrated OSD (some F4 and F7 boards). It just works w/o any pain. Of course you would have to change your Flight Controller…

I try to get the 5v power from hobbywing ESC which have a 5v output.

You can certainly try that, if anything else, to test to make sure that it resolves the issue. If it does and as @rickyg32 pointed out, you may experience video noise from ESC. I do it as @rickyg32 does, I have a completely separate 5v power supply that’s soldered onto the PDB just for the MinimOSD. It helps to assure that there’s nothing else that would draw it down.

power the osd separately is best way, but consider the weight, I don’t. want to add a separate battery, so the remain problem is where to get the power feed to osd. first I get the power from servo line in pixhawk, then pass through an adjustable ubec that out put 5v, in this way I am not sure I can get the clean 5v even though I measure the output of ubec,I always thought that in the air, after the throttle changes, the output voltage of ubec may not be stable, because the input voltage is lower than the out put voltage. may be I can get power from video transmitter which have an 12v output then reduce to 5v，that. maybe get a clean 5v

hi Ricky, as you said, the MW OSD Firmware seems not suite for pixhawk, it can’t display the right thing, I have to flash back to mini osd。my ubec out put voltage is just 4.93v.the osd display right so far, but I don’t have time to flight for checking the stable of osd. good luck for me next time 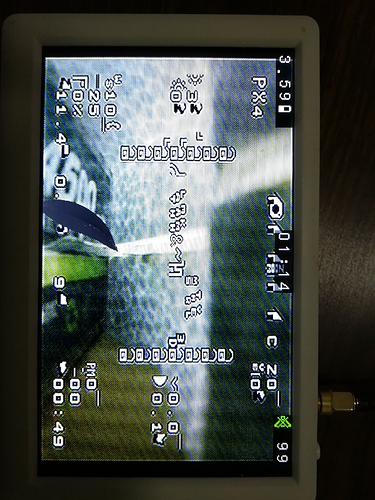 guys, bad luck, it can’t be flash back to mini osd Firmware, there’s not display some value even if i have check the box. 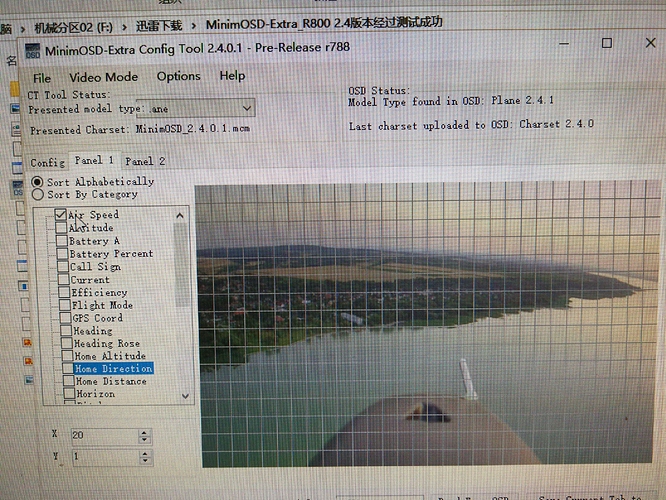