Maverick, settings for "in air"

OK, have been playing with Maverick on a RasPi 3 and Maverick is in DEV mode, and like what I see. The question I have is , Is there a mode or settings that need to be changed to use this on a RasPi Zero W in the air? I have it already running on the Zero, but it is running “DEV” and is a little sluggish…

Well the pi zero is a little sluggish

It’s a slow, single core ARM cpu with slow memory access and everything runs off a USB bus from the last century. Given it’s size and price, it’s a miracle we can run what we can on it

First thing to do is maverick status and see if there are any services running that you don’t need when you’re flying. Normally you would change into flight mode (maverick configure --env=flight), but if you’re using the raspberry-lite image/profile then it shouldn’t be running any of the dev/sitl services anyway.

Secondly, do ‘top’ and sort by cpu usage (‘P’), and see if there is anything hitting the cpu.

ps - you can get help on our gitter channel: https://gitter.im/goodrobots/maverick

This is the output of the status 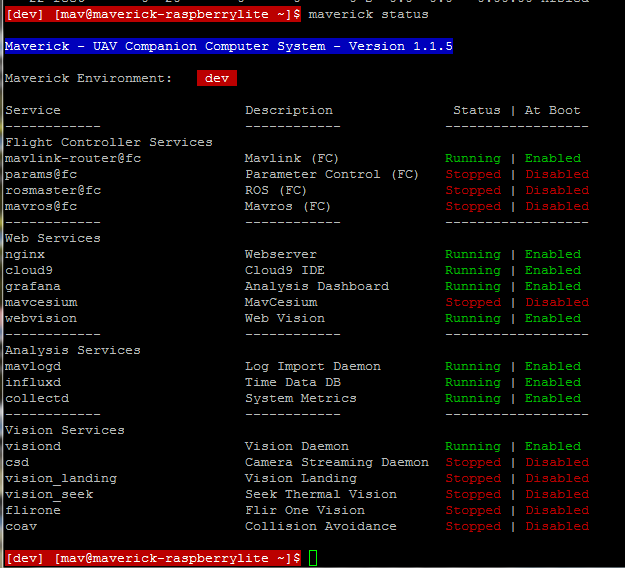 maverick-vision is the heavy hitter it ramps up from 5% to 69% then drops off, then it starts up again, rinse…repeat…

When I change environments the same services are running. Top is showing about the same load.

So what is more appropriate for an “in flight” computer? guessing “flight” environment.

Load averages of 1-2 on a single core with the power of an asthmatic ant isn’t too bad. Higher loads after boot is normal - it’s going through lots of system manifests and service start ups in the background.

If you don’t have a camera, visiond is probably bouncing - it fails and then keeps restarting. You can turn it off by setting parameter maverick_vision::visiond::active:
http://goodrobots.github.io/maverick/#/modules/vision?id=visiond

Yes the flight environment is meant for when you’re flying. On the raspberrylite profile you’re using it won’t make much if any difference, but can’t hurt to set it.