Hello friends! Happy New Year! I have been involved in FPV aviation for over 5 years, building and setting up over 10 FPV aircraft. Used APM, Pixhawk, Omnibus controllers, etc. I mounted the Mateksys F405-SE flight controller on my delta wing “Reptile S800” and installed the Ardupilot F405 Wing software on it. I did all the necessary calibrations and settings. All systems on the table work normally, the rudders move in the right direction from both the remote control lever and the FC automation. However, an unexpected problem occurred while testing the aircraft. Switching to automatic flight mode (stabilize, FBWA, etc.) turns the aircraft upside down. I’ll add a log file here, hoping someone might be able to help me with advice. Thanks in advance Silver-Sass.

That sounds to me like the aileron servo channel is reversed. Or the flight controller is mounted in the wrong direction.

Please post a long file and someone here can hopefully give you a more detailed answer.

Thank you for the answer! The FC is positioned in the direction of the arrow and the processor chip and the SD card slot are on top. Is this wrong?

The google drive is asking for a password so I can’t see the file.

Make sure when you connect it to Mission Planner the HUD is moving in the right direction. The arrow on the FC should be pointed forward.

Here’s some basic stuff you’ve probably already done, but just to double check: In Manual mode, with the radio connected move the aileron stick to the right, and the right aileron should move up. Set the mode to FBWA. Pick up the plane and roll it to the right, the right aileron should move down. If it moves up the servo output channel will need to be reversed, and the RC input will need to be reversed.

All systems on the table work normally, the rudders move in the right direction from both the remote control lever and the FC automation.

I’m stumped. It looks to me like something is backwards (FC, or servo), but you’re saying it’s correct. I’ll have another look later and maybe something will click but right now I don’t have much to offer. Can you post a picture of the flight controller installation?

Photo is here: https://photos.app.goo.gl/giFUq7Zqu4fLUJc3A Left servo-S1, right servo-S2, motor-S3. Before the flight controller was the Omnibus F4 V3, it worked great. The setting is the same. Friends said that the Omnibus is a very bad flight controller, they suggested Matek.

I’m assuming your battery is in the front of the plane, so then that looks correct.

AutoTune mode does not record data the same as FBWA so there isn’t a lot to look at. I’m going to attribute the oscillations to stock initial tuning, and the fact the airplane is not reacting correctly. I wouldn’t worry about those yet.

The reason I say something is installed or setup backwards is because when the Demanded angle goes positive(right?), the Achieved angle shows the plane rolls to the negative (left?) The FC isn’t smart enough to recognized that the plane is reacting in the opposite direction, so it just keeps demanding more of the same and ultimately your plane is upside down. My first guess is in the aileron servo settings. 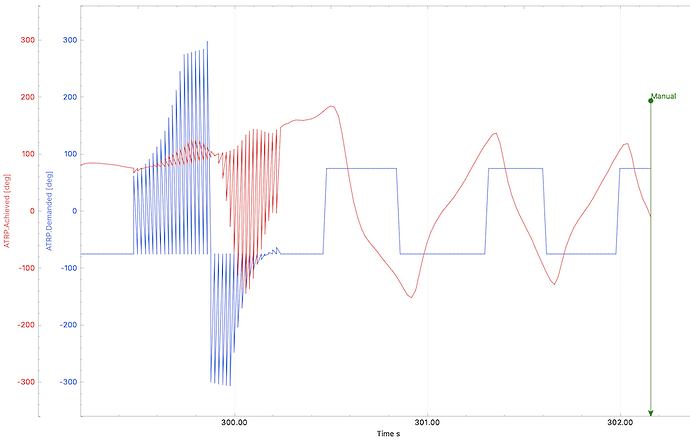 Just for some reference, here’s a similar view of a (still poorly tuned plane) reacting correctly. 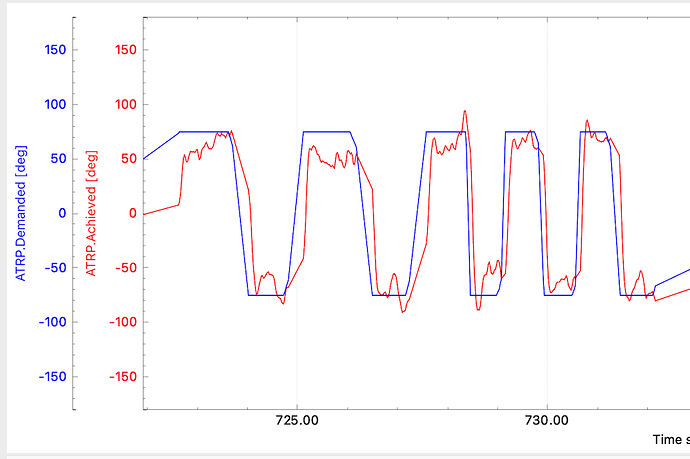 I hope this helps.

I installed and reconfigured everything, I will try it as soon as possible. Thank you for the help!

I got the plane working. Thanks to everyone who lived with me and helped me!