after some smaller changes the quad with Pixhawk1 from 3DR should be re-auto-tuned yesterday (AC 3.4.6) when it randomly sunk and even touched ground (like a hard landing). Completely unexplainable to me at first sight.

The Quad was taken into AltHold and i started AutoTune at almost no wind at 7-8m above ground level. It was doing several slow but steady losses of height at a random time. Stick input for throttle remained almost ineffective, however the transmitter gives 100% (trims were centered). PosAlt and BaroAlt are almost identical, so air pressure fluctuations are no issue. And if so, it should not be 8m difference at almost zero wind. 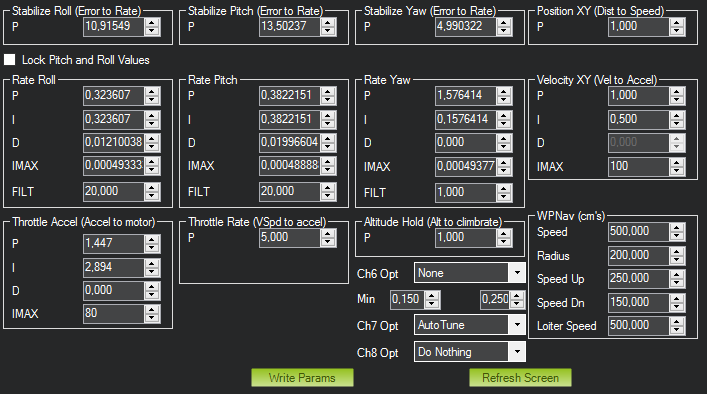 Yes. RCIN shows the value of the control channels that your Pixhawk is receiving from your receiver.

The CTUN message has DAlt field which I believe is the desired altitude.

I’m a little suspicious that there’s a motor problem here. Looking at your log, RCOU.C3, the throttle signal from the pixhawk to your ESCs, seems to be relatively constant despite changes to your throttle input, and it seems to generally be around 90%. Can you give us some details about your vehicle? Weight, motor size, batteries, etc. Was it flying correctly before you started using 3.4.6?

Hey Lars, thanks for the reply.

after studying more and more i am of the same opinion. All possibilities i know of are fine and not at all an issue for that spontanous sinking…

Maybe it’s AutoTune and/or the version 3.4.6 is buggy in my setup.

What’s your opinion about going forward to the latest 3.5beta?

Alex: I have a very similar issue than you reported here: Esc failure or signal lost? thank´s for help
on yesterday test the log looks very similar, then I share If you want, and I have the 3.4.6 fw too, I´m going to try the latest beta that works nice in my racer before to buy new esc but it looks more than a unsync o failure esc than a fw issue. Be carefull and test near the floor before try autotune again, please comment if you solve, thank´s

UPDATE: Yesterdays flying (LOG attached) after update to 3.5RC8 showed again that there is a problem somewhere along the power drive.

RC inputs are fully there and shown in MC radio calibration screen (calibrated as well).
Soon after take-off It seems that motors get out of sync and there’s no respond to throttle. Taking off works well and there is thrust. Soon after hovering in low altitude with some gentle stick inputs the quad is loosing power. It happens to all 4 drives.

I played with the update frequency settings to maybe solve the de-sync.
100Hz was also good but i will go back to 400Hz.

FC is a Pix32 Holybro from the beginning (when flying for some weeks was fine).

I think i might change the props to 14x4.7 to maybe prevent the de-sync. But why did the same setup fly with enough power and a good reaction a couple of flights before? Seems like i’m getting closer but i do not find a “real problem”. That makes me feel uncomfortable.