It has become evident that servo displacement between the three swashplate servos has to be consistent throughout the full range of servo movement to keep from introducing coupling between pitch, roll, and collective. If the servo arm movement stays within +/- 30-40 deg of rotation from trim (which assumes the arm is perpendicular to the linkage at trim), then error between a linear throw and the actual throw is +/-4%. For servo arm throw up to 60deg then the error increases to a max of 14%. Since the swashplate orientation relies on all three servos, even errors of 4% can introduce coupling.
Unlike other servos, the swashplate servo min and max is fixed to 1000 and 2000 and is not able to be changed by the user. Well they can change it but it will be set back to 1000 and 2000. Since the min and max is fixed, I can make an assumption that 1000 and 2000 pwm is an arm angle of +/- 60 deg. Thus assuming a 1 inch arm radius, the max linear displacement of the arm is sin(60 deg) = 0.866. So I equate the full linear displacement to 0.866. So a request of 0.1 from the code would equate to 0.0866 actual arm throw linear displacement, if the arm was 1 inch long. Now the arm angle is back calculated to give that displacement. In this case it would be arcsin(0.0866)=4.97 deg.
I will put some graphs in illustrating the difference in the servo movement. I just wanted to socialize this idea as I move forward. It would definitely be a user selectable feature because there is certain criteria in the setup to get this to work properly.

I think your method will probably work and prevent servo binding for four-servo swashplates (when eventually supported).

For 135/140 swashplates (not currently supported in Copter) that have a 1:1 ratio for servo movement for any control input in any direction, this issue is non-existent if the mechanical part of the system is set up correctly. It is why these heads were designed for 3D.

For 120 swashplates where the servos move in a 2:1 ratio for elevator input, it becomes an issue at full collective travel. Even at zero collective with a 120 swashplate, with everything set up perfectly, I can measure .008" movement in collective with a dial indicator on a combination elevator/aileron input. Which only makes the helicopter fly sloppy compared to commercial FBL units that are able to tune this interaction out.

Various manufacturers have done different things to mitigate the geometry issues. On the Thunder Tiger heli they use these rate multiplying linkages to place the linkage to the swash at ideal geometry. And adjust the geometry of the swashplate to make it 1:1 ratio for the servos. And it actually works. There is zero interaction on any control input in any direction. And it is very noticeable in how the heli flies - supremely accurate on control inputs. 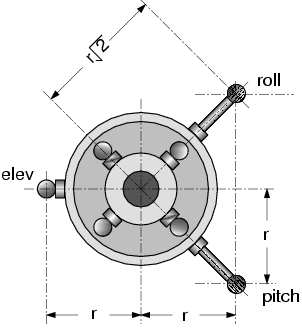 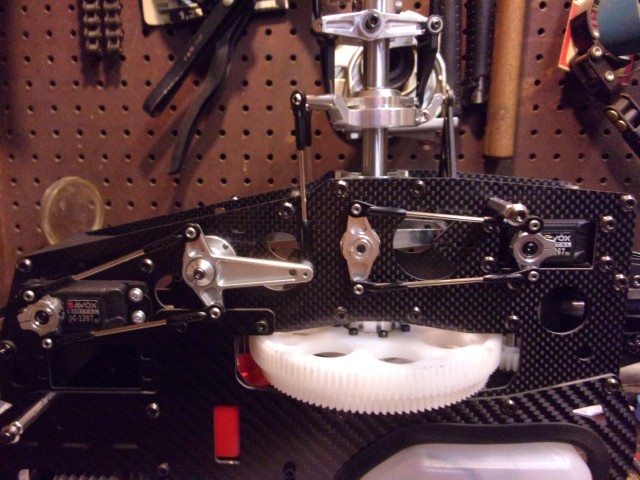 By contrast, this is the layout for a typical 120 degree swashplate. Not quite perfect and requires some compensation mixes to get “pure” inputs. 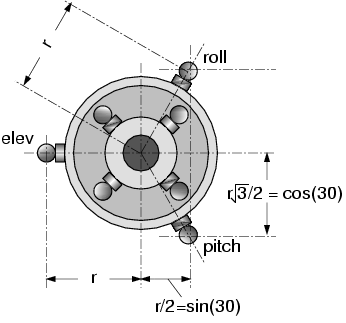 By contrast, this is the layout for a typical 120 degree swashplate. Not quite perfect and requires some compensation mixes to get “pure” inputs.

Looking at the TT set up, that brings up a good point about my planned implementation. My current implementation assumes the servo arm is directly connected to the swashplate linkage or the arm length for the bell crank and servo are the same. This technique would have to be adjustable and is dependent on the bellcrank or servo arm connected to the swashplate linkage.

Now that I see the thunder tiger implementation, I agree that would reduce or nearly eliminate the coupling.

It is kind of a unique setup for the TT. There is 3mm lock rods that goes thru the arms and holes in the frame to center everything and level the swash. Then the servos are started up and centered at 1500, H_COL_MID is set at 1500 and you lock the servo horns to the shaft cores.

Instead of the swash moving up to increase pitch to hover, it goes down to increase pitch. This seems to keep the linkages at more of an ideal angle to the arms. And any control input deflects one arm one way, and the other the other way, the same amount. So it is sort of self-compensating for the arm arc travel.

If it does have any interaction, I can’t measure it with a dial indicator over the full collective range I have set of -2.5 to +10.8 degrees. Measuring the collective change on either roll or pitch input the needle on the indicator, with the plunger on the swash ball, stays at whatever it is measuring for collective travel, and does not vary even with the width of the needle, which is <.0005" (five ten thousandths of an inch).

I will put some graphs in illustrating the difference in the servo movement.

I just had some questions regarding how ArduPilot linearizes the swashplate movement.

The following is some code from the AP_MotorsHeli_Swash.cpp file

Another part of the code is the following:

From what I understand, the code is doing the following. This may be wrong so please correct me:

I am struggling to understand how using this method you are able to achieve linear servo movement and was hoping if anyone could explain.
Also, if this option is used, what are the requirements for the mechanical setup of the servos in order for this to work?
And does servo trim position mean the neutral position?
And why must it be at 1500, and what does this number represent?

@Suhayl_Patel First here is a post that describes the setup for the linear servo feature. Be sure to read the first and second post as I tried to provide a little more clarification on the setup of the linear servo. 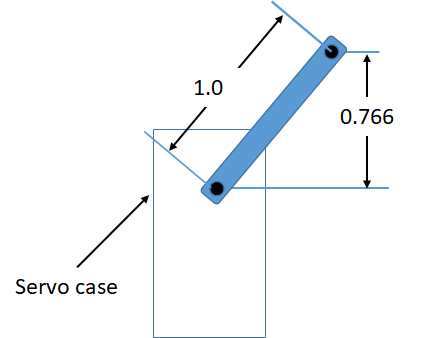 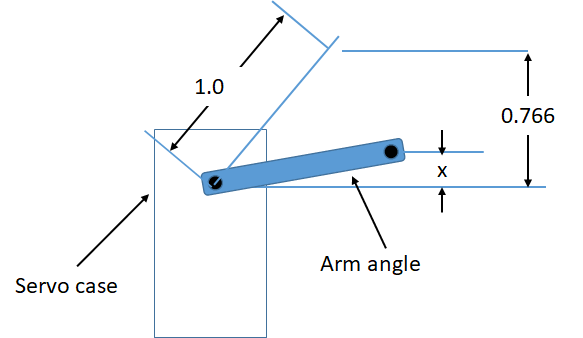 The output of the equation above is the arm angle to achieve the linear output requested by the controller. This now has to be converted to a pwm output for the servo which equates to an arm angle. the output to the servo in the code is -1 to 1 which equates to 1000 pwm and 2000 pwm. So the arm angle in radians is divided by the equivalent of 50 deg in radians which is 0.8726. But for coding purposes, multiplication is faster so I multiply by the inverse which is 1.145916. this normalizes the output to the servo.

@bnsgeyer After reading your reply and the post that you linked, I understand how the linear servo feature works.

Me and my team at university are designing a custom heli that will run ArduPilot, and will have a payload that it will be able to drop. We are using a T-rex 550E Pro DFC rotor head and swashplate.

We wanted to create an optimisation software in Excel that uses the genetic solver function in Excel to calculate the required servo horn length, servo linkage length and servo position to give the best mechanical setup, whilst the linear servo mechanical throw option is on. What performance measure do you think we should try to optimise the setup for, so that we get the best mechanical setup integrated with the linear servo function?

And since we are dropping payload, the hover collective would change. Have you got any advice on how we could accommodate for this?

Also would it be possible to use the linear servo function in the following format, so that when switched to manual mode, you are able to do 3D flight? 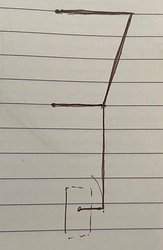 If you are planning to be able to do 3D flight then I would set the mid servo position for 0 deg collective. The suggestion I made above was for a UAV heli where collective blade pitch range is -2 deg to 10 deg.

And since we are dropping payload, the hover collective would change. Have you got any advice on how we could accommodate for this?

Not much you can do in manual modes like acro and stabilize. The modes that use altitude hold feature will automatically adjust collective to stay at the desired height once the payload is dropped.

We wanted to create an optimisation software in Excel that uses the genetic solver function in Excel to calculate the required servo horn length, servo linkage length and servo position to give the best mechanical setup, whilst the linear servo mechanical throw option is on. What performance measure do you think we should try to optimise the setup for, so that we get the best mechanical setup integrated with the linear servo function?

I think you are pretty locked into a specific setup unless you are making a new frame. Also the throw required to pitch the blades x deg is fixed by the control horn. If you don’t intend to do acrobatics then set the collective range for a UAV heli. If I had the ability to adjust the things you state above. You want to use the full throw of the servos to achieve the collective and cyclic extremes. Thus you get the most resolution ( more PWM per deg of blade pitch) or put another way least blade pitch per PWM.

@bnsgeyer @ChrisOlson Sorry for bothering again. I would really appreciate the help on this question.

I don’t think you can look at it that way. These calculations are not designed to equate to the full throw of the servo. The collective is scaled according to H_COL_MIN and H_COL_MAX. The cyclic is added to that. I don’t know how the original developer came up with .45. For most sport helicopters the collective range is small. A collective range of -2 deg to 10 deg results in a PWM range of about 200. So for most UAV helis, they rarely use full throw of the servo to achieve the max extents of collective and cyclic. The servo that would come closest to doing that would be servo 3 for the standard H3-120 servo since it needs the most servo movement to achieve full pitch cyclic throw. Hopefully this answers your questions.