Hi Guys! I am super new to this and not particularly well versed at “open source” anything.

I have a macbook pro running APM planner 2.0.24 and I’ve been trying to learn how to create waypoint missions in order to complete aerial surveys.

A friend of mine has demonstrated how to do this on a PC but I don’t have one. I’ve been watching all the online tutorials on youtube to try and figure out how to use it, but they are mostly for PC versions running Mission Planner and I don’t seem to have many of the options that the PC version does!? i.e. I don’t have any polygon options or “camera actions”!?

Am I missing something or is APM Planner for mac’s not really supported?

I was surprised to see there are very few threads along the same line of enquiry as mine, hence why i’ve started this new thread!

I would be most grateful if anyone can share any links to guides that can be of use to me please? and let me know if I just need to buy a PC!?

p.s. here is a screen shot of my program options: 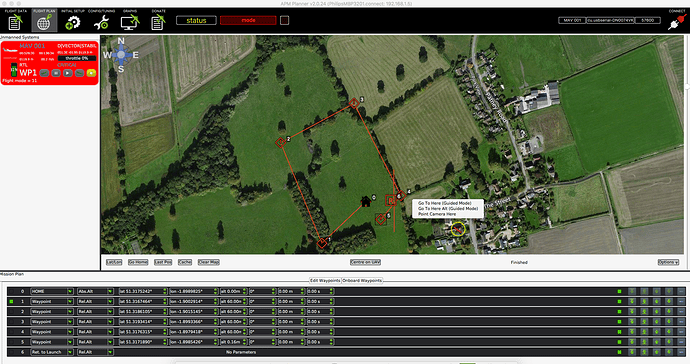 APM Planner 2 on Mac is very much supported. However, you should not compare Mission Planner to APM Planner 2–two very different products.

I felt very similar to you. I really struggled to get APM Planner to plan missions and to operate how I expected.

I switched to QGround Control for any autonomous flights that I do now. I found it more intuitive to use and did all the functions that I needed. I also liked the survey option where you can draw and area and the software works out the flight plan.

There was a plan to update the Map View control in APM Planner 2.0 so it would easier to add features like surveying etc… It hasn’t happened yet. The main features of APM lLanner 2.0 is that it allows ArduPilot configuration and log analysis and graphing on non windows platforms. It’s supported as much time as I have to keep it working and useful.

Thanks for telling me about QGround Control Bruce! I’ll check that program out!

Are you the sole developer Bill!? That is an admiral and thankless task I guess, so thank you for your efforts!

Do you have any idea of a timescale for when further functionality will be added to APM Panner 2.0??

APM Planner is the goto tool for Graph analysis and general configuration, and has always been solid on the Mac, and almost immediately patched by Bill when something changes.

QGroundControl current release crashes on connect under macOSX 10.12 to be aware.
It also seems friendlier to PX4 than Ardupilot, as I seem to hit snags in it’s operation running Ardupilot.

@essentialpilot I see APM Planner 2.0 as the configuration tool. I actually use MAVPilot as my “flight buddy” or Tower (I mostly use MAV Pilot, but it basic, no survey feature as of yet, and requires WiFi to connect)

Ideally we need a reboot of GCS software, I think a suite of tools that provide graphing/planning/flying for each use case and platform, mobile/desktop would better suite peoples needs. The one huge app that does it all is too complex to maintain, but a smaller collaborative apps are much better in structure. How mobile apps for tablets and phones have evolved.

Thanks for your replies guys! Seems there are a few options to go flying with then.

Since I have managed to create a flight plan in APM planner, can you tell me the likelihood of it working before i test it please? I never had the option to set an air speed so am dubious of what will happen!

In fact, a simpler question would be to ask, does the “Flight Plan” section in APM Planner 2.0 work at all? @billb @mboland

Phil, any reason why you don’t use Mission Planner?

I only have a mac and its not compatible. I’ve heard of mac compatible versions but the old links don’t seem to work anymore!?

@essentialpilot you can run a Virtual Machine on the Mac to run Windoze.
There are free ones from Apple and others but personally I use VMWare Fusion.
Does a very good emulation and is not expensive.

If your mission uploads, and then checked by downloading it to see if anything has changed, it should be good to go.
As long as you haven’t got obstacles in your flight path

Thanks @mboland. I’ve managed to complete a few waypoint missions on my mac in APM planner 2.0, but for some reason it just buggers off once its passed its last waypoint. I don’t know where its going but it’s certainly not to the “home point” as i’ve ensured that has been accurately positioned on the map. Any ideas?

I also suffer from it buggering off in a similar fashion when i tell it to “go home”. It doesn’t tend towards a particular direction either, it just heads off in a random direction (typically away from me).