This video is a test of two new things:

First the lidar, the SF45/B is very small and light which is nice because it can be fit onto a regular sized quad like my Hexsoon EDU450. It can be directly connected to the autopilot’s serial port without the need for an additional BEC or companion computer. 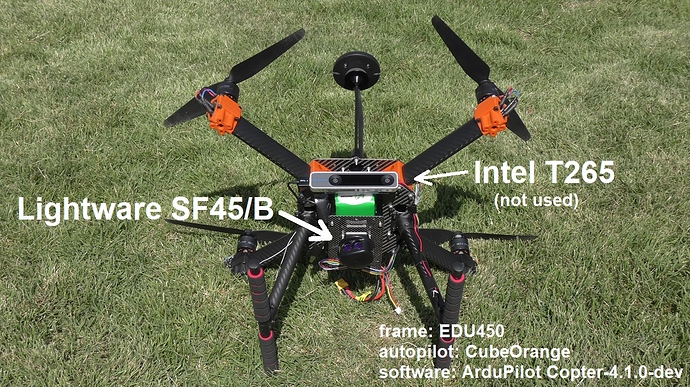 frame-bottom-annotated1080×607 429 KB
The lidar’s update rate is probably not fast enough for localisation (i.e. Non-GPS navigation) but it does fine for object avoidance and its claimed 50m range is much longer than a 3D depth camera. The sweep angle is configurable up to a max of 350 degrees but in my test I used the default range which is about 180degrees. I think a narrow range of perhaps 120deg might work even better. I also hope that eventually we use this lidar for terrain following because it could give us extra information about the slope of the ground beneath.

Re Simple Avoidance’s backaway feature, despite the jerkiness I was very happy with how it performed. You can see I approached the copter from various angles and the vehicle moved away at the configurable backaway speed (see the AVOID_BACKUP_SPD parameter) as expected. Although it is hard to see, it also kept away from the trees. Maintaining a safe distance from multiple objects is actually pretty tricky but AP can do it. In theory it should be possible to fly a copter down a hallway now so hopefully we will have a video of that working eventually.

I think we can reduce the jerkiness by adding acceleration and maybe jerk limits to simple avoidance’s algorithms.

Thanks to Lightware for sending me one of their lidar and to Rishabh for all his hard work on improving AP’s obstacle avoidance!

Hi Randy,awesome work by you as usual,im just back to ardupilot after a long illness,but im firing on all cylinders now,I have just fitted A SF45 to my Hexsoon and will start out door testing beginning of next week,and this could not have come at a better time for me plenty tinkering ahead,will also replace the SF11c to a SF005 one when funds allow as will tidy up the Hexsoon,Am very fortunate to have a great stockist of all the quality Ardupilot stuff in 3DXR and very knowledgeable support from Ben,Once again thank you for all you do for us and Rishabh for his excellent work.