Is it possible to AutoTune a CoaxCopter?

I am having a lot of fun and pain with my fifth build of a CoaxCopter. 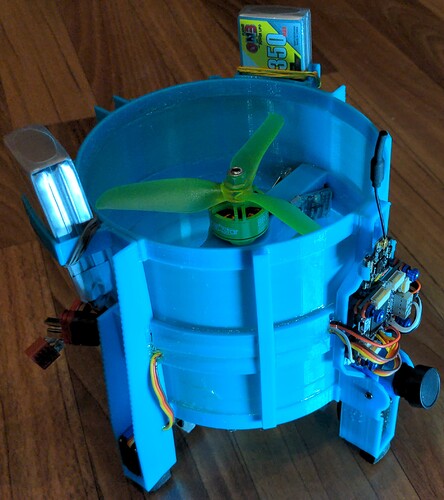 The philosophy of the build is to aim at the lightest possible vehicle, assuming it is (a) ducted, (b) FPV-capable and (c) works with 5" props. This means that the mass of motors, propellers and ESCs is not negligibly small, hence the whole vehicle is bound to have a high center of gravity - in fact, the higher the better, to have enough pitch/roll control authority of the flaps.

In turn, this means that the vehicle is much more like an inverted pendulum. As a result, too small P term in PIDs results in not just a sluggish copter like it is with quads, but in dangerous oscillations. These can be self-accelerating if P is much too small - I had a couple of violent crashes - or fading in hover, but getting back as soon as I try to get some non-zero speed.

When speaking of “too small”, I mean ATC_RAT_PIT_P = 0.2 is way too small. Seriously. My quads of same, smaller and larger sizes all have smaller (some much smaller) values.

Given all that, is it ever possible to use the standard AutoTune procedures to obtain some decent tuning?

I mean, it is possible to invoke: today I have finally managed to invoke AutoTune, and it did two twitches, after which I had to cope with some 1 m/s wind, failed to gain pitch authority to get some positive speed, ran into a protective net over a football field and melted one of my propellers. The logs showed that the second twitch is commented by “failed to level, please tune manually”, then it attempted to have a third one but was interrupted by me. However, I don’t know if it is just “multiply your PIDs by 1.5 then go back and try” or a sign that AutoTune shall not be used at all with a frame like this.

I would not expect it to work well. Coax should probably have a significant feed forward term that auto tune cannot find.

Yes it should be possible, but no one has ever done it (or at least reported it). I’ve tried but it was too long, the motor overheated and this was the end of my project. As @iampete said I did not expect it to work well after that, my manual tune flew well without any feed forward, but the gyroscopic precession will likely throw the autotune off.

I did not get if your copter flies well enough, but if it doesn’t, you should not attempt an auto-tune.

The problem that currently it does not fly well enough. In particular, it destabilizes quickly when attempting to fly upwind. Just in case, it has plenty of power to do that - it just catches insanely huge oscillations before it does.

My main concern is that AutoTune may have some assumptions (e.g. monotonicity of having oscillations with respect to P or D value) which CoaxCopter, or even this particular build, may not meet. I have not read the code yet, and I believe it is not easy to understand whether it actually converges even after reading the code.

If it is unstable, the doc and other people say that you should not autotune.
I was gonna say that you should try with some other single/coax you have, but just understood that the problem you are the most worried about is not the autotune on single/coax, but the weird inconsistent performance your the copter and its influence on autotune.

Seeing your experience, I don’t think I can help much more on this subject.