Improving stability of a copter with two gimbals

I’ve built an X8 copter with two gimbals, intended for shooting 360x180 panoramas. The gimbals are STorM32, one on the bottom and one on the top, inverted (upside-down). It uses a Tarot 650 frame, has Pixhawk 4 controller, 8x 390 kV MultiStar motors, and 15x5.5 propellers. The battery is 4S, and the ArduCopter version is 4.0.3. I attach a photo of the copter.

The whole thing is rather complex. It flies more or less as intended. Here is an example panorama shot with a Gopro 6 and 7 Black (still using JPG format, now I shot RAW):

The problem is that in windy conditions the copter is a bit unstable. It doesn’t fall out of the sky, but swerves some metres to sides, can’t hover precisely, and wobbles. Once I had a hard landing when the battery power has dropped, I’ve fixed this by setting the voltage correction. I’m not a PID expert, I went through an autotune without gimbals.

Of course I know that the gimbal configuration makes the copter inherently less stable than a “classical” setting. The upper gimbal and the moving camera arms make the conventional tuning not possible. Maybe that’s something to be accepted, but maybe there are some PID adjustments which could correct the described problems and increase the overall stability? The problem is that the best conditions for panorama shoots are when the sun is in the zenith, and that means the strongest thermals…

I wanted to run all the motors with DShot control, unfortunately Pixhawk 4 does not enable this for 8 motors. So I ended up with 4 motors running DSHot and the rest controlled by PWM. This is not good and I would want to find a more capable controller. It must be low in order to fit, so no “cubes”.

much more turbulent and unstable flight: 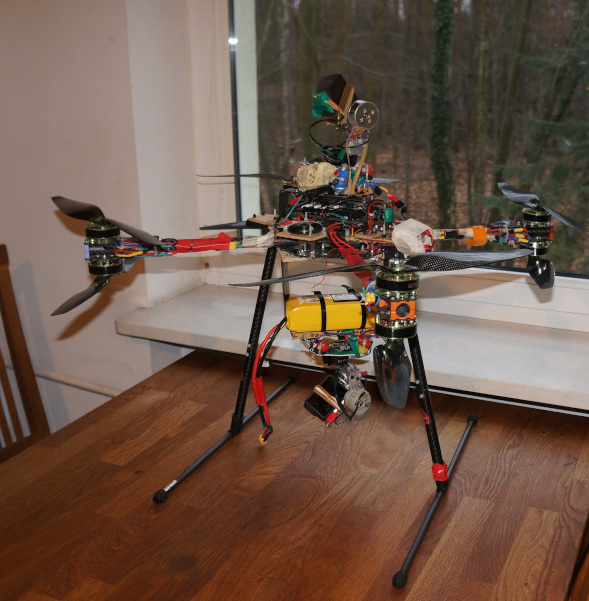 Take a look at vibrations, did you try using a notch filter?

Once you do that, follow the tuning instructions and only after that do an autotune.

I think the Pixhawk v4 from Sparkfun has 8 aux outputs that you can use with Dshot.

Thanks for the answer, I have forgotten how much interesting stuff is there in the docs. The problem with autotune is that there is a warning that it would not work if there is a “Flexible frame or payload mount.”

“The first 4 of the auxillary PWM outputs support DShot.”

Which is very unfortunate, you buy a high-end controller and lose the benefits from better sensors because of less precise motor control. I’m building a similar X8 copter (to have two and be able to experiment with one while the another one would stay ready to fly) and I’ve chosen Matek F765 Wing, with less sensors but no I/O module and thus capable of 8x DShot.