I search to collect the angle of attack or the slope, is it possible?

Hi , I have a major question , it could be the last if it works !

Actually we have access to the pitch , but I also need the angle of attack, is it possible ? 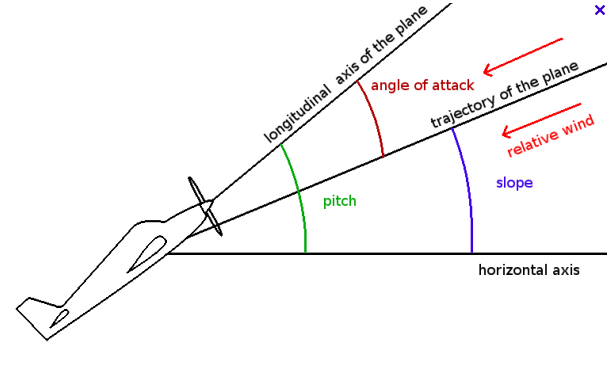 The wing area A

mass of the aeroplane m

where cl is the unknown lift coefficient

To sustain the aircraft in flight also

rearranging and substituting the formula (If my working is correct!)
where alpha_deg is the unknown angle of attack in degrees

Firstly thanks you a lot for helping me ! That’s a good idea, but there is still one problem. As I’m in climbing flight my equation becomes Lift=mgcos(slope) . And I have not the slope angle

Or maybe you have used the approximation that mgcos(slope)=mg for small angle. (slope<<1) ?
And in an other hand, do you think there is a function to return directly alpha in Arduplane ?

Actually, skyscraper’s assumptions work regardless of climb angle. The only difference is that instead of “g” in the equations you use “a_z” (Z axis acceleration). I’ve used this assumption and validated it against an actual AoA probe (made by Aeroprobe) and the results agree to within a degree during flight.

You might need a different constant term, but the basic assumption (AoA proportional to some constant times “a_z” and “V^2”) holds during normal, non-stalled flight, in any attitude.

If you want slope, you need to differentiate position or combine velocity and climb rate. But slope isn’t a good way to calculate AoA compared to the method mentioned earlier.

however there is currently a pull request to make an estimate of angle of attack available.

I think it may require an angle of attack sensor though

Okay thank you for your replies , I needed this angle to find the Vx valuers of my plane from the Aispeed. Finally I have decided to find it by deriving positions.