How Autotune PID are calculated?

Hello everyone,
I was analyzing the pid on a mission planner after the autotune.
What I was wondering is where the parameters came from.
Is it possible, using the autotune log, to understand how these parameters were calculated?
example know why P goes from 4.5 to example 15.

I wanted to know in particular what practical technique are used to calculate them.
Thanks,
regards.

@Leonardthall is the real expert on autotune so he might be able to help.

The process and criteria are pretty well described by Leonard’s comments in the code. From mode_autotune.cpp:

You can look at the rest of the comments in the code if you want a deeper understanding. Some of the #defines describe how the final PID values are generated.

Thanks Anubis!! That pretty much sums it up!

Thank you very much, you have been very helpful!
that you know, this technique has a particular name?
or if it is possible to derive a mathematical formula or something similar?
Thanks again.

As per comment from source sode, Autotune first tunes rate P, then stab P. So the question is - does an initial stab P affects somehow on the autotune result or not? I.e. will my autotuned PIDs be different starting autotune process with StabP=4.5 and starting with StabP=15?

And as @prova123 noticed autotune increases StabP from default 4.5 to ~15 for me too on 450mm frame. Autotuned PIDs are +/- 30% of the default values. Does this mean something? Default StabP is too low? Owerpowered/underpowered setup?

No this approach does not have a name and I have not taken the time to publish it in any control journals. This is an approach I came up based on pretty basic control principles of what is a reasonably simple control problem.

It actually first tunes rate D then rate P and finally Stab P. Stab P is not used during the tests for rate D or P so it can not have any impact on the final tune.

The stab P can be increased only when there is a good rate tune. Using manual tuning we found numbers o 4.5 to 6 on stab P before you would start to see oscillation or poor performance. With AutoTune we found we could go much higher because the rate D and P were set much better. So the defaults are low because they are chosen to be a safe start for people during their first flight.

I generally find that 18 is a little sharp and the aircraft feels a bit better at 10. Try both and see what you think.

Thank you sir, i will reduce it and test

I tried to the autotune on my quadcopter (750 mm diagonal) and I got the values in the screenshot attached. 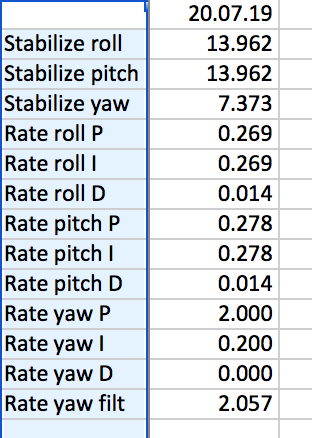 In the full parameter list max values accepted for Stabilize roll and pitch P values are 12.000. The copter flies smoothly, should I worry about those high values >13? Should I set those two values to 12.000?

Thank you very much in advance!

That looks like a good tune. As long as it has no bad habits when in flight you are good!

Dear @Leonardthall thank you very much for your quick reply. I will look for bad habits and in case I will decrease the high P’s!
Cheers
Filippo