I’ve developed a small lua script for automatically starting a predetermined mission based on GPS health, orientation and external switches and I want to run it on my pixhawk mini. The problem is; when I try to create a scripts folder through MAVFtp I get an error message saying its not allowed. I had no issues creating a folder before on other flight controllers. 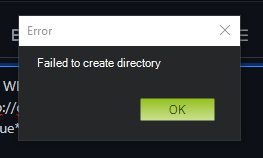 Is there anyone who has experienced a similar thing? I was initially worried that the pixhawk mini couldn’t run scripts at all but I’ve seen posts online claiming it can. I’ve tried freeing up memory by disabling terrain but it has not solved the issue.

Running 4.1.0 DEV, will flash it to a stable build and see if it works.

Bump, anyone whos had similar issues or has a way to create the folder in another way?