I have a Flamewheel F550 knockoff hexacopter which mostly works great with one exception…one motor is occasionally cutting out during flight, always the same motor HEXA-X #6. It only drops out for about a second, comes back and often drops out again 5 seconds to a minute later. I’ve changed both the ESC and motor and still seeing the same behavior. In this log the issue occurred about 1/2 dozen times. One instance is around 161105.

I’m not sure where to go from here. Anyone have any ideas on what I can look at next?

Make sure both your power and PWM connections are sound all the way back to the source.

Try another flight controller if you can, there may be an electrical issue with one of the output channels.

I don’t have another flight controller for this one. The FC is a Pixhawk. To test if issues is the output channel could I try unused output channel 7 or 8 instead by changing Position 6 from Motor6 to Motor 7/8? 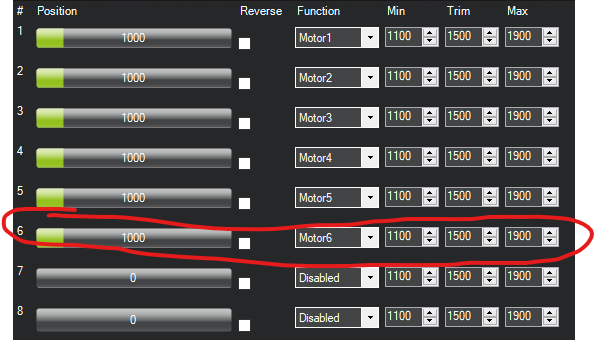 To answer my own question, I was able to switch over to MAIN OUT 8 for Motor 6 and spin up the motors. After a longer flight test I’ll report back.