I am using the Flywoo Goku 745 AIO with the latest version of Arducopter. I am trying to control a Futaba servo. I can control it just fine from the RC receiver, but when I hook up the servo to serial 4 on my FC it doesn’t work. I have set SERIAL4_PROTOCOL = 15, SERIAL4_OPTIONS = 2 (inverted TX), SERVO_SBUS_RATE = 73, BRD_PWM_COUNT = 8, and SERVOX_FUNCTION = 56 (Ch 6 on my remote). It still doesn’t work after all this, I think I am getting close but the PWM out is not correct. Attached is a picture from my oscilloscope. 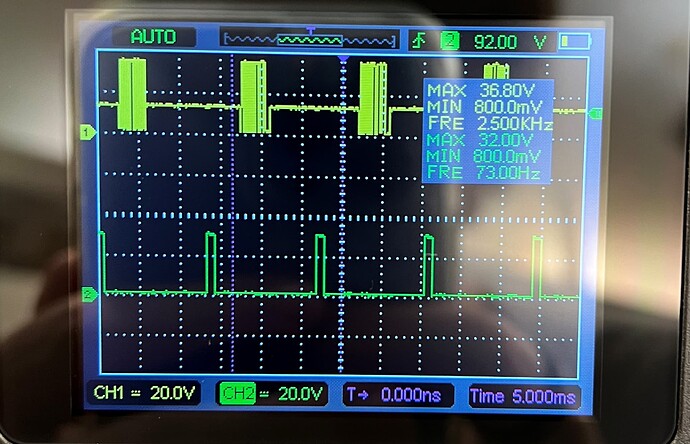 The top (yellow) is the output from Serial 4 and the bottom (green) is the output from my RC receiver on channel 6. Somehow I have to get the top yellow line to look like the bottom green line. I notice that the serial 4 out looks similar but in reality, the frequency is 2.5KHz while the real output is 73Hz, this is despite me already setting SERVO_SBUS_RATE = 73

The code has this, which seems a little suspicious to me:

I believe its just PWM? since it works directly off the Futaba receiver (Not the Sbus port) Is there a way to do pure PWM out of the FC?

Just use a PWM output rather than a serial port

how do I set that up? what Params do I change?

Connect your device to a motor output above the range you are using for motors. Make sure the BRD_PWM_COUNT is set to the number of motors you have. Set SERVOx_FUNCTION to whatever you want it to do, where x is the motor number of the output. So for instance on a quad, connect to motor output 5,

The output you are using also needs to be in a different group to the rest of the motors. You can see the groups in the board docs.

The board docs are not very useful, I have 7 serial out, and the board says it has up to 10 PWMs. but I cannot figure out how to get that PWM output on the serial ports

Don’t use the serial port, use the motor outputs - that;'s what PWMs are

oh ok, I was confused since it said there are 10 PWMs on the documentation. Does this mean that there is no way to output PWM on the 7 UART ports? even with GPIO?

Not easily I don’t think - and why would you?

we are using quad configuration, so that’s motor 1-4 but we would like to be able to go up to a Hex (since the bord has an output for motors 5 and 6. But we have plenty of free UART ports. I supposed we could hook up a servo to the LED pin, however, that means we will probably lose the indicator lights.

The hwdef has support for motors 7 & 8 + LED and one other. Are there not pads for these on the board?

If this is the right board it looks like it: 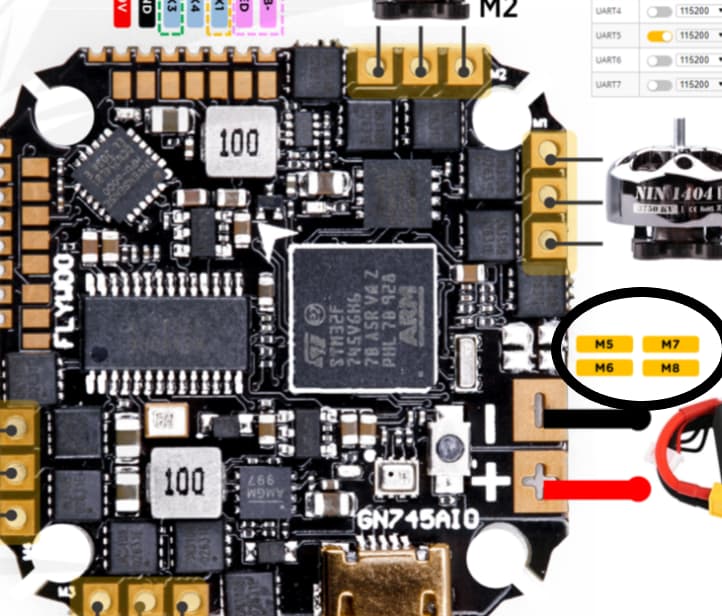 You could use a serial port for sbus out, as you tried to do plus an Sbus to PWM converter as I did here:

Previous conversions of the Convergence to ArduPilot have used the Pixhawk1 flight controller (E-flight converge default file, E-flight Convergence demo in Hokkaido), but the airframe is rather small, and a PixRacer fits more easily. The PixRacer has only 6 PWM outputs, and the Convergence needs 7 (3 ESCs and 4 servos). But the PixRacer does have a spare UART in typical configurations… and a UART can be used for SBUS output with capacity for up to 16 additional PWM outputs. Onboard video of h…

That is the old board, the new one doesn’t seem to have those? 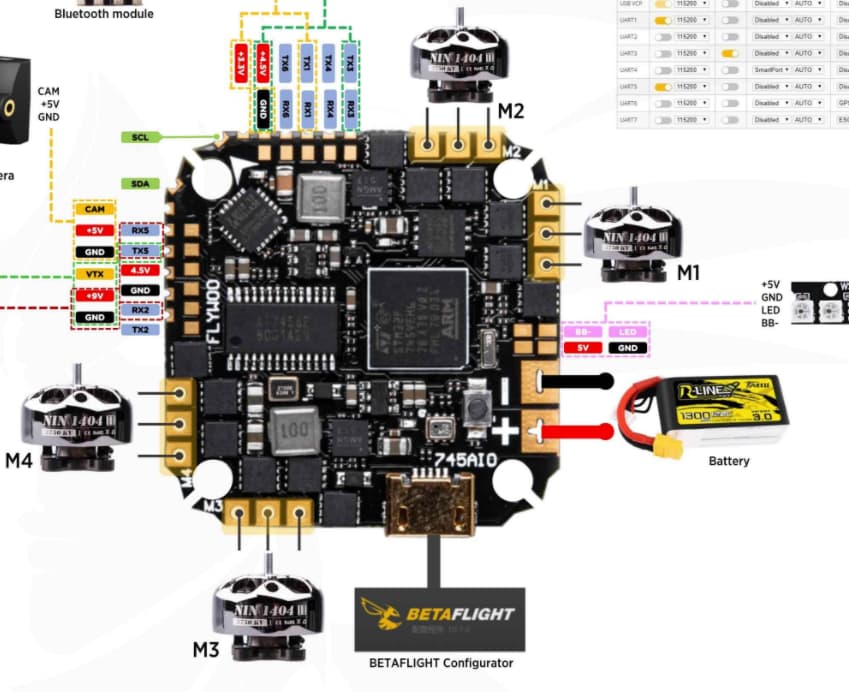 Seems not. I wonder why they would do that because those functions on the 4 pads were available on the top set of pins on the V1.0 board. This is the only explanation they give:
Improve the land layout. Increase the pad spacing, easier to solder

There are also cheap sbus servos available and you wouldn’t even need an adapter to use a spare serial port: Corona SB-9039 Servo - 2.7kg (37.49oz in), 0.13 sec
Of course, if you don’t want a cheap servo both FrSky and Futaba make expensive ones…

You could write a custom hwdef that remaps pins, but really you are on your own with that