H frame with hobbywing x8 motors it flew well later i have changed the motors with t motor P80. after changing the motors i have done one stabilze flight it flew well then i switched to alt hold and the drone crashed.
can someone help me find out reason i have uploaded the log.https://scandron-my.sharepoint.com/:u:/p/nuthan/EfsgkJrz0MRJmF_xbGnqTksBzy3ZjgbDAzZkxJdYkA-aBg?e=x673Is

The first flight looked reasonable - just a bit of tuning needed.
I dont think the problem had anything to do with the flight mode.
Then the second flight, two motors ramped up to nearly maximum even before take off. Then motor outputs were oscillating between maximum and minimum. Maybe ESCs were not responding properly, like a desync.
Try increasing MOT_SPIN_ARM,0.07 to about 0.09 or 0.10 to ensure motors are reliably turning before launch.
Set a motor emergency stop switch - it’s instant when something like this goes wrong, much quicker than trying to disarm.
RCxx_OPTION,31

I would change
FFT_MINHZ,30
because the FFT is missing the actual source of vibrations at about 40Hz and only finding the harmonic at 80.
And probably set
INS_HNTCH_OPTS,2
since this is no racing quad.

Hold everything - looking again!
Probably not an issue with motor/ESC desync as I first thought.

Here’s a common problem:
If we focus on just the last part of the log where the craft crashed or tipped over you can see how it thinks it was moving on the map in only about 4 seconds, up to 2.5 meters per second.
You can also see from the lines on the map that IMU position and GPS position dont agree, and usually vibrations are a contributor, but in your case vibrations are good - this is all GPS.
This happens with larger copters that tend to have longer legs, and there’s GPS position wandering during takeoff. The copter can easily catch on the ground and tip over or be disturbed enough to become unstable. Or it could just be trying to move laterally without you knowing why. 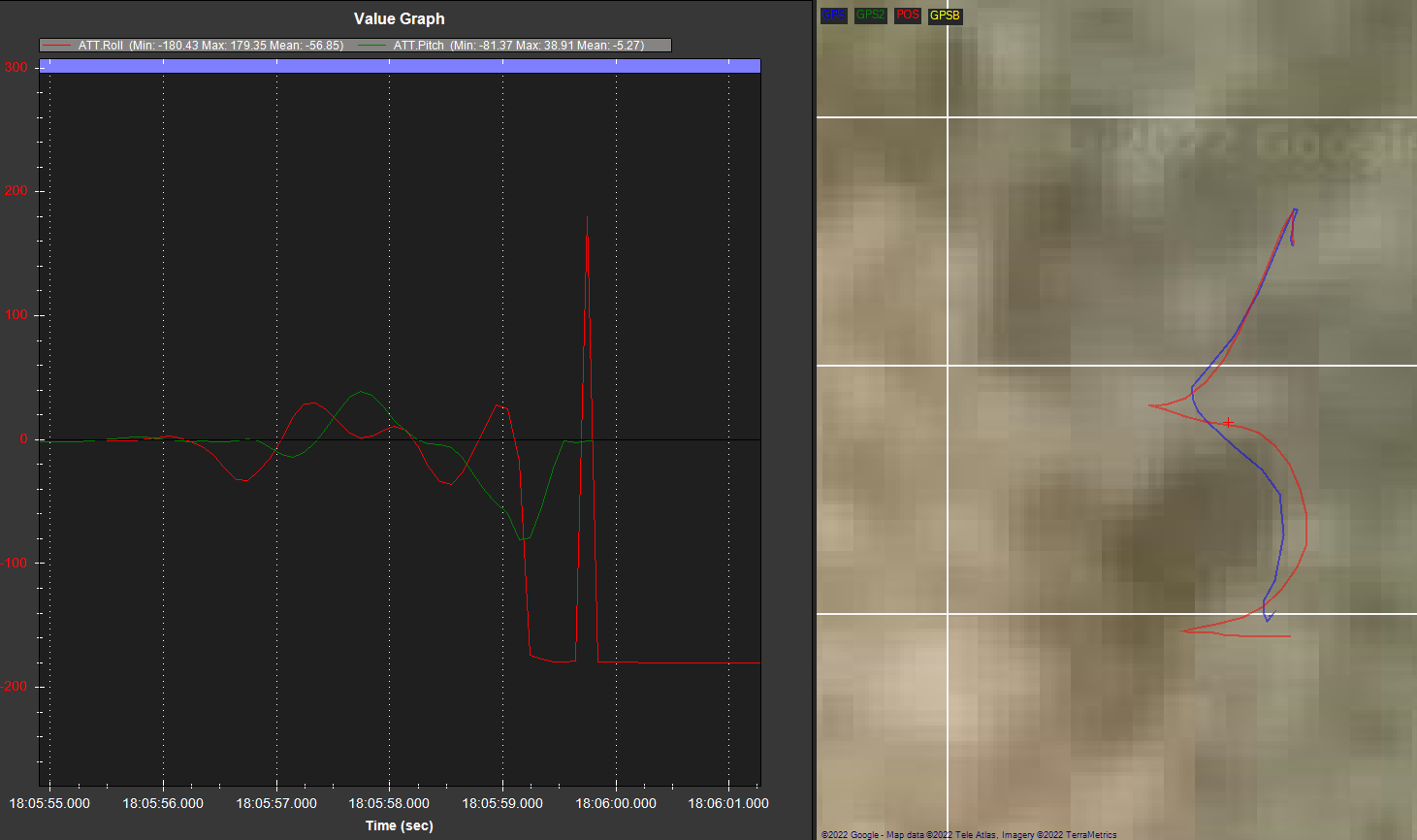 And you can see it when you look at GPS Speed too, it suddenly goes to much higher values
and longitude and latitude also suddenly change. 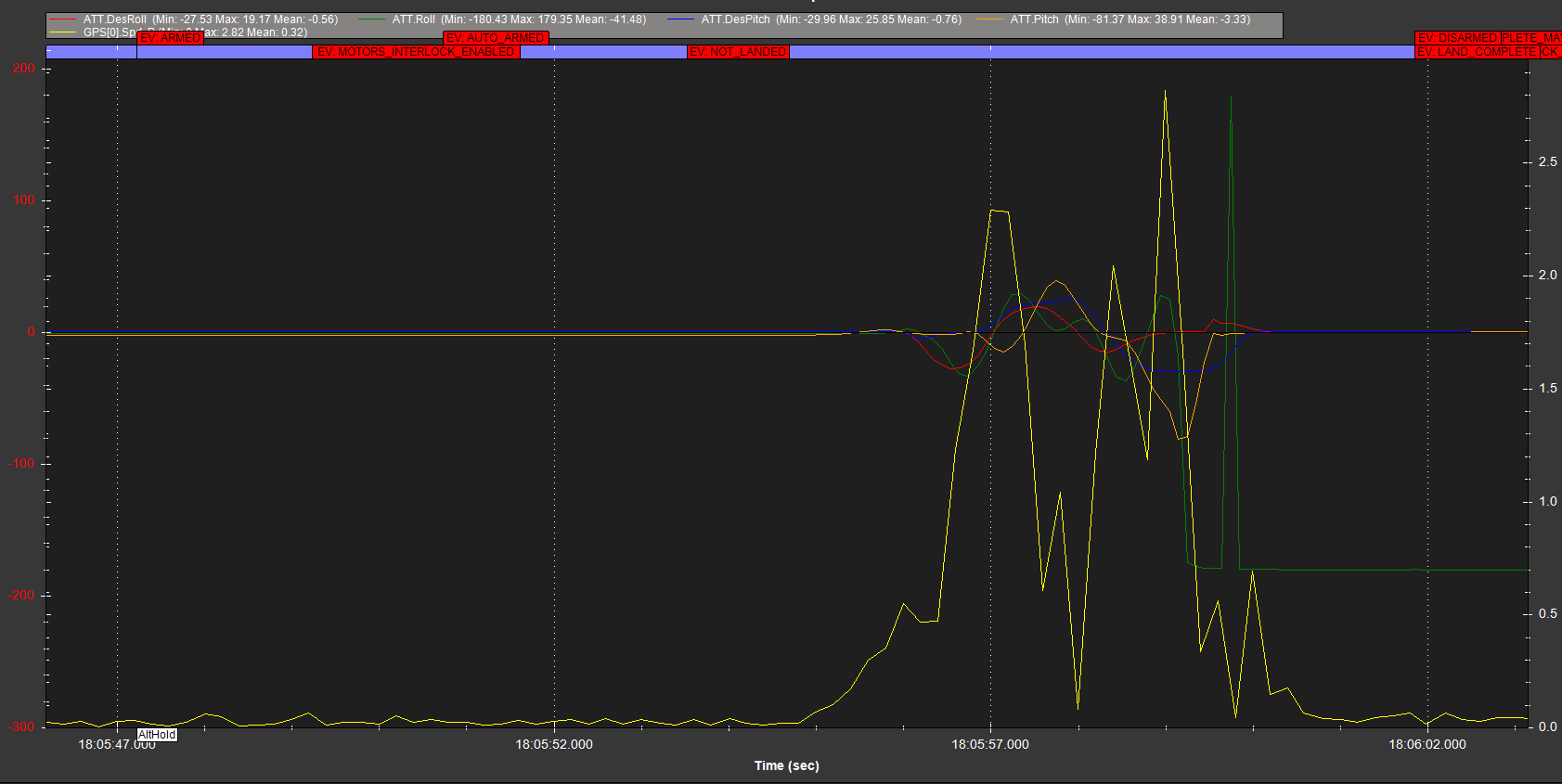 If you also look closely at pitch/desired pitch/RC pitch input , you can see the craft was also trying to follow the RC input but it was already somewhat in trouble and human inputs are not fast enough to correct. You almost always end up doing the opposite of what you intend.
It’s probably better to let go of the sticks, and either drop throttle or increase it.
The same for roll too - it’s easier to look at one set of pitch or roll at one time.
The RC input may have made the situation a bit worse, but I wouldnt say it was the primary cause.

What I would do

Also updating to 4.3 will give you a new parameter related to take off that works in conjunction with PILOT_TKOFF_ALT, it tames that sudden jump off the ground but still gets airborne in a timely fashion.
Try TKOFF_SLEW_TIME 5 or up to 10 seconds

For the record, AltHold is basically the same as Stabilise except “throttle” becomes “desired altitude” - pitch and roll control are exactly the same.
Apart from becoming familiar with Stabilise for emergency situations, I mostly use AltHold and Loiter.
We also use a spring-centered throttle and set PILOT_THR_BHV,7 - this is very suitable for multirotors and can be a saviour if you ever have to switch to Stabilise in an emergency. The number of times people had their throttle low and switched to Stabilise with the resulting crash…

Regarding the FENCE setting, it will NOT let you arm in any mode until there’s a good GPS 3D Fix and Home can be set (two stages in sequence!). Wait for the solid green LED. This is good.
Yaapu telemetry script on the transmitter (and a suitable receiver) are magic - you will hear these stages being called out without using a ground station and second person.
Some people complain this takes too long - they just need to be patient, this only happens on the first power-up of the day and it gives you time to think about the flight and planning. Subsequent power-ups can be a lot quicker to acquire a Home position.
Some people say instead of setting the Fence, just select Loiter mode and wait for a solid green LED, then switch to another mode and launch. This is effectively exactly the same as enabling the fence, because it will take the same amount of time for the same reasons, BUT is open to human error. They are fooling themselves.