This my first message here so please tell me if I do anything wrong.

I think I have a GPS glitch issue with my octocopter equipped for photogrammetry with a Pixhawk Cube and a Here+ GPS mounted on a mast well above the rest of the electronic.

A few weeks ago a had a first GPS glitch resulting in GPS failsafe auto landing. Unfortunately this was close to the ground and on a windy day and the drone flipped over when touching the ground and resulting in several props damaged. Time to get new props and to make two new training flights last week and I was good this week to fly for a client. Unfortunately things went wrong when close to the end of the grid mission. The copter was at 70m above ground. Again I had a GPS glitch and a GPS failsafe and the drone went to land safely up in a pine tree. But we had to make it fall from the tree to get it back and this is were I had some quite heavy damages.

Is this normal to have GPS glitches so often? Would it be worth to add a second GPS for navigation? I actually have a second onbard GPS with a Reach M+ for photogrammetry. Should a connect this GPS to the Pixhawk so the autopilot can choose the best in flight?

Thanks a lot if somebody can help me.

Here is a picture of the copter: 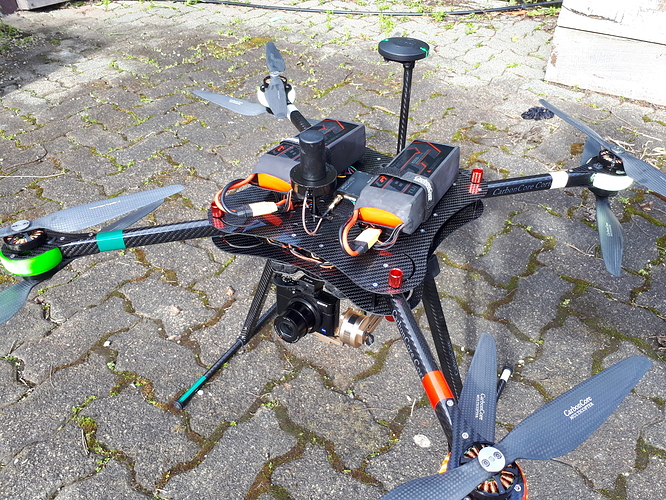 What radio emissions do you have onboard ? 5.8 GHz video, 433/900 MHz datalink ?
Try flying with them powered off for a change.

I’ve seen cheap chinese 433 MHz telemetry knocking GPS from 18 locked sats down to 6 in a couple of seconds.

My datalink is in 915 Mhz and there is the RC transmitter in 2.4 Ghz. I have an optional video transmitter but it wasn’t onboard when it happened. Both datalink and RC transmitters are at the back of the frame, below the GPS antenna.
Thank you.

Here it is for last Thursday.

I don’t see any GPS glitches or failsafe action while flying in that log. What I do see is a thrust problem with Motor 4 (output at max) trying to be compensated for by Motor 5 (opposite arm and at min output). And in general a large imbalance of motor outputs. Load distributed evenly?

FInally! Someone with a sense to put navigation lights properly, and not like “green front, red back”!

I navigate on boats and I fly airplanes. The “green front, red back” doesn’t make sense to me.

Hi Dave, thanks for looking at my log. Your observation is interesting. So there was a technical failure at motor 5?

When the incident started the copter was out of sight. A tree line was hiding the copter for a few second. As I wasn’t seeing it coming back I quickly understood there was something wrong. It took me a several seconds to walk to the other side of the trees and have the copter in sight again. While walking, I switched to different flight modes to try to gain altitude or to RTL. Nothing worked. When I saw the copter again it was drifting and going slowly down like visible on the log file. And I know this is what happens in land mode. When the drone was visible again it was already next to the pine tree, in a private property and there was not much left to do expect to hope there would be no damage to the property and of course nobody hurt. Why was the drone drifting and going down?

Dave, one more thing. I’ve just checked myself the log and for what I understand the motor issue started much before the forced landing. Am I right?

Hi Ivan-Motor 4 actually would be the problem. When there is lack of thrust on a motor for whatever reason (motor itself, broken prop, ESC) the FC will drive the output to max trying to compensate. It will also lower the output in an opposite arm trying to keep level flight from lack of thrust in that opposing arm. Classic response data from a failed component supplying thrust.

Yes, it did start much earlier. In fact you can see where it failed, then recovered for a bit then failed again until it crashed.

But then what’s the relation between the motor issue and the forced landing? With 6 motors the copter should be able to stay in the air and under control.

@Ivan_air3d_nz correct if the copter is designed for it. This copter is poorly designed however. It’s either overweight or underpowered to the point all 8 rotors are vital for flight. With a fresh battery, it does have the power to handle a motor failure as proven in the log (descent begins halfway through the motor failure), but the moment the batteries dropped below 23v, flight was not possible. When the FC can’t hold altitude, it will force level attitude as it tries to gain altitude, so it no longer responds to your flight commands. The proof for this is motor 6 is pinging max throttle the moment motor 4 dies. The copter is barely maintaining flight for 2 minutes before battery drops too low and begins descending.

Something else interesting is altitude is erratic and slowly dropped throughout the mission. This isn’t intended is it? This is probably due to the excessive z vibrations in your copter.

Yes the altitude slowly dropping during the mission was intended.

Now I have hard to believe that this copter is underpowered or overweight. I’ve done amazing missions with this copter. I wonder if the lack of power could come from unhealthy batteries? I knew the pack of batteries for that flight was closing to retirement. But this was a very short and easy flight. This copter is usually able to fly like a rocket, go far and stay in the air for long. This time in stabilzed mode at take off I felt it a bit sluggish. I thought it was the result of my last PID tuning too much on the soft side. But maybe the aging pack of batteries is the right reason. Could it be?

I said your copter is underpowered/overweight to deal with a motor failure. Your batteries are fine.

If you look at Desired Alt/Alt you can see that the moment Motor 4 loses thrust there is a small loss of altitude in the 1st instance. Then in the 2nd instance, which essentially remains thru the rest of the flight, it’s struggling, and failing, to meet the desire altitude. Previous to these events it was spot on. What throttle position is required for this craft to hover under normal circumstances? I would be interested to know the specs of this craft just to review some things.

I couldn’t tell you precisely but hovering is around throttle at 1/4th. When I switch from Althold to Stabilized mode with throttle in mid position it climbs well.

I tested the motors last night and they all run fine. I also checked previous flight logs and there was no motor failure. The ESC’s are inside the arms and i didn’t check yet if there is any damaged wire. Could the motor failure be due to inteferences? I didn’t put any ferrite ring on the wires to the esc’s. Should I?

That component set at that weight looks OK to me. I would think it could handle a motor failure.

he’s hovering around 1600 pwm which is a linear throttle of 63% which might sound bad, but it’s possible to have a high power/high weight copter hover at 60% and still have a 3:1 thrust:weight… hover % tells very little

even before his motor failure, the copter repeatedly hit full throttle just to pitch 20°… this copter barely flies