I do not want to pay 24$ for FlightDeck.
I do not think it is fair in a Open Source envinronment to pay for a software taht exist only because of Open Source community.
I would pay the same money for a donation.
I did it for Mission Planner in example

Craft and theory , get money with pricey cables so the software should be free.

I do not like that in Arducoper documentation it is not state clearly that passtrough telemetry it is non free software .
So any passtrough alternatives will be welcome.

Feel free to suggest changes to the documentation and submit a pull request.

Passthrough telemetry is 100% free. You can use it in your own lua scripts. It has faster data update rates and more messages compared to the repurposed FrSky messages telemetry protocol. There has been some projects by others to use the passthrough protocol, but we’re not aware of working ones yet. The protocol and data messages table are detailed on the passthrough protocol page in the wiki docs.
The problem isn’t the protocol, but rather no one is making the apps. It takes time and effort…

For an alternative, I suggest the great LuaPilot from Ilihack that is also made specifically for Ardupilot. It uses protocol “4”, so it has its limitations, but it’s free.

Happy to help you with modifying the docs if you would like to make an improvement.

Don’t forget you can make your own cable from FrSky parts or other, so you don’t have to purchase the cable from us.
We stand 100% behind the quality of our cables and FlightDeck and provide support to make sure that it works on your system. 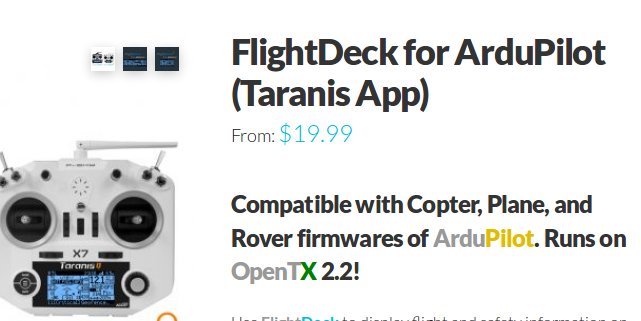 English is not my native language but it seems pretty clear that the FlightDeck “Taranis App” cost from 19,99 $

In my opinion it is unfair to make a profit with a software in a environment where all the software is free.

Do you think that guys that develop Open TX or Arduplane sell it ?

Without Open TX your software would not even exist.

So why should your company ask money for a little software that was inspired from other softwares as Mavlink Frsky Port or Luaplane that you mention ?

Do whatever you want but in my opinion it is unfair since you already has a profit from calbles.

Well our opinions diverge. We do benefit from the open source community, and that’s what’s great about it. We wouldn’t be where we are now without the superb work and help from the Ardupilot and OpenTX folks! We also provide support to both OpenTX and Ardupilot and code that has nothing to do with FrSky telemetry as well. You know, these projects benefit from contributions from companies like us too, to pay for servers and tasks that volunteers don’t like to do like code review. We want them to keep going. It’s been working great and we’re happy to keep helping and contributing. What’s too bad is when companies take the code from these projects, put it in their products, don’t tell anybody, sometimes hide the code and/or lock it with an activation key and never give back.

I noticed your other post about the problem you are having with Arduplane and Luaplane. https://discuss.ardupilot.org/t/bug-with-frsky-native-telemetry-arming-disable-it/
Check your LOG_BITMASK and maybe try with a faster SD card. If too much data is being logged on a slow or corrupt card then CPU usage is too high and the Pixhawk doesn’t have time to reply to the FrSky receiver which causes telemetry data to be lost. Hope this helps.

it is a free market and no one is forcing you to buy flightDeck, The script and package together are very reasonably priced.
Glad I purchased it

I do not want to pay 24$ for FlightDeck.

Lua Plane or Mavlink Frsky Port do exactly the sam ethings and the software is free.

One thing I do not like is that in the Ardupilot Wiki , the Mavlink Frsky Port pratically disappear while Craft and Theory products are in great evidence .
DIY solutions should have the priority.

Ardupilot Wiki should mention that Flight Deck is not free so you can choose to continue to read about that solution or not before landing on their website.

Obviously you people that spent 24$ do not want to feel stupid and say that it is a good purchase the point is not that.ù

The real question is : is it also a FAIR purchase ?

I will never buy Craft and Theory stuff, not because I do not thing their products are good but because it is a question of principle.
I their software was free I eventually bought their cables , but since they are doing IMO something unfair , I will not give them any money.

Another reason for not to buy the C&T software is the "6 months " free update politic .
So if after 6 months a new version of Arducopter change the protocol or what else I’m suppose to give to C&T some other money ?
I said goodbye to Microsoft 12 years ago switching to Linux, I do not want to be fooled around by no one with software if an alternative exist, and in that case alternatives exist, Lua Plane and Mavlink Frsky Port

In Open Source environment the software should be supported by donations.

Obviously you people that spent 24$ do not want to feel stupid and say that it is a good purchase the point is not that.ù

I’ll never feel stupid for purchasing a great, out of the box solution that works with no time investment from me. One thing I’ve learned in the past two years is DIY consumes a tremendous amout of time. This is an easy business decsion for us. Like I said a no brainer. I thank Craft and Theory for making it so easy.

Feel free to suggest changes to the documentation and submit a pull request.

Thanks James.
Would be happy to do it , how should I proceed ?

Editing in GitHub directly is easiest. Perhaps look at the changes made here https://github.com/ArduPilot/ardupilot_wiki/pull/892
and make changes to that existing PR.

One thing I’ve learned in the past two years is DIY consumes a tremendous amout of time. This is an easy business decsion for us. Like I said a no brainer. I thank Craft and Theory for making it so easy.

Airborne Projects sell a cable that do exactly the same but you do not have to pay for their software and all the updates are free.

Never paid myself except for the hardware.Airborne Projects lead is stuffed in my parts bin and will never get used again due to it’s restrictions.Never tempted by Craft and Theory.There are no restrictions with this.Scott has finished developing it but will sort out any problems you get with it through the RCGroups forum.I have a Teensy on every copter except the Solos.Has not been ported to OpenTX 2.2 yet as Scott has been busy on proper work.

You can even use this Teensy version to power and drive a full LED rig.Lots of LEDs.Lots of them.Lots.

All free but you have to buy and build the hardware yourself.Is that what You’re after ?
https://www.youtube.com/watch?v=tZH9ersorEc

Added a pull request on the wiki pages to introduce LuaPilot and LuaPlane:

Let me know if you have more ideas about what to add.

It is the second time in two days I have to tell “Thank you Thomas” .

The next one I would fell in debt and become one of you customers.

All free but you have to buy and build the hardware yourself.Is that what You’re after ?

I use the Teensy solution since two or three years now .
Since the Pixracers boards have a Frsky port I found interesting to have telemetry data without additional hardware, I use it a couple of times and worked well.

I also use Luaplane a version of Luapilot dedicated to planes with TTL RS232 converter .

Passtrough telemetry have more data compared to Frsky native , I hope that a free software solution will be available next.

I did not know ScottFlys telemetry, thanks for the suggestion Jagger

Then don’t buy Flight Deck. You can use the alternate FrSky protocol and use a less expensive solution with less functionality than Flight Deck provides.

FWIW, I use Flight Deck with 3 Pixhawks. FD is an excellent product and it is worth every penny.