Had two flights this morning the first launched in stabilize and flew around normally. We switched to Position Hold and normal flying continued. While still in Position Hold we parked the tricopter in the air and after a few seconds controls became erratic and we coaxed it back in and landed it. After looking over the logs the desired pitch and the actual roll become correlated at the moment of issue and the desired roll and actual pitch become correlated as well but opposite of each other. This looks like the pixhawk suddenly thinks it went from a cross to a plus orientation or vice versa. I know tricopters don’t have these frame classes but it looks like the pixhawk thinks it changes orientation by 45 degrees. Our second flight had the issue the entire time. We’ve used this same pixhawk on a quad without any issues. Does anyone know what could cause this?

Link to the .bin file:
https://drive.google.com/file/d/18BaH4cd7XLLqgr6Dz7B2Yv2GctSXYnEi/view?usp=sharing

Here’s a photo of the Desired Roll Vs Actual Pitch that clearly illustrates the problem. (This is from our second flight) 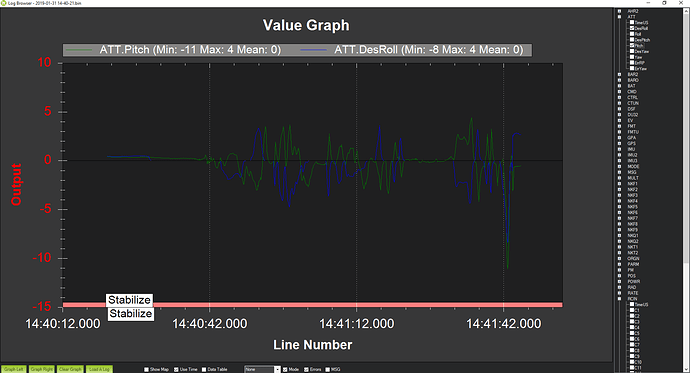 You haven’t stated what frame type you are using for tri-copter so I am assuming RCout7 as the tail servo.
This seems to be causing some issues as it does not get actual and desired Yaw together.
There is a big deviation in the Des/Act Yaw which seems to the initiating point for roll and pitch to deviate.

I also would have expected the tail servo to be close to 1500PWM for hover but it is close to its minimum value, which will only allow free travel in one direction.

Thank you for posting this. It hasn’t solved the problem but it has narrowed it down greatly and we increased the pwm limits significantly and it still tries to peg itself to one side to correct the yaw created by the three motors. We have many crafts with these parameters on them without fault. It definitely seems that something is wrong with the yaw servo but we have not been able to identify the problem, everything we check seems to be in good working order. We’ve strapped the tri-copter down and it seems to respond normally to yaw inputs with the tail moving back and forth as expected. The problem only presents itself when in flight. Could you tell my what you are using to analyze the logs? Your graphs are much easier to read than the ones given by default from mission planner on a windows machine.

Use APM Planner for those nice graphs.

Is the tail servo being over powered in flight?