I’m working on a fixed pitch swashless heli project. I’m used to work with Ardupilot, I have both fixed wings and multicopters running Ardupilot. I was hoping tu use Ardupilot for this project aswell.

I only found this thread regarding the subject:

Hi everyone, I’m building a Single Rotor Helicopter with a different control system and am trying to figure out if I can use Ardupilot to control it, and if so, which configuration to use. Could someone point me in the right direction? I do not use a swashplate, so it is: • Fixed Pitch (No CCPM) • Flybarless • No Cyclic • No Collective All servos are independent of each other Servo #1: Aileron Servo #2: Elevator Servo #3: Rudder Servo #4: Throttle (Z axis Ascend/Descend) I read in the…

Is this still the way to run a fixed pitch heli setup?

If you are controlling the yaw axis with a tail rotor then I suppose it would be. I haven’t seen any changes to single Copter that supports an independent yaw control (doesn’t use other servos to control yaw).

Yes, I will be using a DDFP tail rotor

How do you plan to control roll and pitch

The idea is to hinge the rotorblades so that decreasing / increasing rotorspeed at spesific points in the rotation controls the blade pitch: 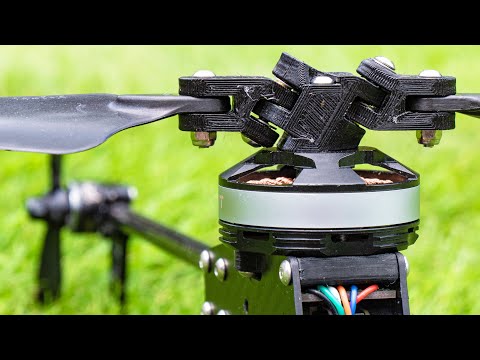 and the original prototype:

Yes. I had seen this concept before. I would think that you need a specially coded motor mixer to make this work with ardupilot unless you have a separate controller that does all of the motor control based on the pitch, roll and collective inputs from ardupilot.

@JAR4x4 ardupilot would be capable of handling all of the motor mixing but someone would need to code the required motor mixer. Since it is fixed pitch and you are already having to design a new mixer, this should be put in as a frame type under the multicopter code. Then you can add the tail rotor to the new frame type too. Maybe call it Fixed Pitch Traditional Helicopter.

Correct! My plan is to make a separate mixer board with a Teensy 4.0 board running Arduino code that i feed with throttle pitch and roll PWM from my FC. I know my way around Arduino coding, I’m not that familiar with the ArduCopter code yet.

If I can get that working, I’ll try to port the code to ArduCopter.

@JAR4x4 How has this project been going? I’m currently working on a 200 sized fixed pitch heli but struggling to get it tuned. Really wishing there was more support for fixed pitch projects, so curious how yours is progressing.