Hi all
i have a 3DR pixhawk and i had a crash with my quadcopter after upgrading to 3.6.9
before this day i had a similar crash on an older version, maybe 3.7.x and i thought it was a faulty esc
after this i changed the GPS with a NEO M8N, the 4x DJI 30A ESC with hobbywing 4 in 1 and the batteries with a pack 10400mAh 3S LiHv (2x 5200mAh)
i did a couple of flights before the crash and run the autotune successfully and a couple of missions with spline waypoints and take off/landing: all perfect

at this point i decided to test how long the quad could fly and fully charged the lipos and put the quad in loiter
i have to admit i soldered the current sensor the other way around, so i had no current measurement and i just monitored the voltage that was very stable during discharging
after 43 minutes the quad had still 10.75V and started doing some twitch every once in a while
at 44 minutes the quadcopter entered in an uncontrolled wobble and went down flipping into the ground
the battery had another 10% capacity
i know i overdischarged it, i was set on coming down at 3.5V per cell, which now i know it is too low

what could be the problem?
thank you

Looks like a motor/esc failure of motor connected to RC12, same motor twitched a couple of times before the crash.

Hi Eos
both motor no 2 (RC10) and motor no 4 (RC12) seems that have twitched more than a couple of times
i don’t think that a double esc/motor failure is possible and also it’s not the motor that gave up the crash before
this is the old log https://plot.dron.ee/eug4
now that i see it better there was something wrong with ESC/motor no 1, it was always at 100%

in the log i can see that motor no 2 (RC10) (btw i switched outputs from RC1-4 to RC9-12 because i’m using Dshot1200) twitched more and more in intensity until the quadcopter became unstable and couldn’t recover and mantain attitude
could it be that the voltage dropped so low that the pids became insufficient to stabilize the quad?

this time the quad crashed after just 32min into the flight
It had another 8 minutes of flight time before hitting 20% of remaining capacity, so it cannot be an issue with the battery
Last time motor RC10 and RC12(rear motors) had higher values, now motor RC9 and RC10(diagonal motors) had to work harder and i cannot explain why
Whats more interesting is that exactly these pairs of motors went crazy and caused the crash to occur
I’m really suspecting an issue with motor sync or something really wrong with my PixHawk

Looking at how the desired and actual diverged, and the CW props working hard and the CCW hardly working at all, it is not surprising to an oscillation set in and cause a crash.

Assuming you have checked that the motors are all square to one another, prop tips in line with each other, and the frame is balanced around the centre of thrust, then this is the second log I have looked this morning where there is a large discrepancy in thrust between CW and CCW.

First step would be to get the thrust figures closer to 1500.
Add some weight or a bigger battery.
then
Try and find why the CW props are not producing the thrust the CCW props are.
then
Do an autotune.

In the end it turns out that when the battery is half full the copter does not have enough thrust to stay in the air and compensate efficiently
it is a very precarious balance and as soon there is a move that requires a drop in propeller speed the copter looses thrust and goes down wobbling
it is pretty evident pushing full throttle at different levels of battery: at 100% it goes up quickly, at around 50%(and maybe more) it can barely climb
looks like i have to check the combination of lipo count, motor and propeller

Did you modify the GPS Coordinates in some way to add anonymity to your location?

I notice you mentioned using a Hobbywing 4in1 ESC. I had a similar experience as yours and found the 4in1 was very hot.

The ESC manual says it will protect itself in a high temp situation by reducing the power output but will never go below 25%.

My quad fluttered down but landed upright. I could not touch the ESC.

Yes, the site will give you an option to randomize the location when you upload the log

Glacier i will check ESC temp, i tried with telemetry but it is not supported in my version
i also used more aggressive timing but it is never enough and i always loose power
maybe is an issue with motors, even with the old DJI 30A Opto ESCs i had motor stalls or reduced power with consequent crash

Hi Hquarter
I have 2 Turnigy LiHV High Capacity 5200mAh 3S2P 12C batteries in parallel onboard for a total of 10400mAh 12C continuous (125A) - 24C burst (250A)
The copter needs only 155-160W to hover, or around 15A when the battery is empty at 11V
Current shouldn’t be the issue but rather the voltage that is too low for the motor to drive such a big propeller
I think I will 3d print a thrust meter and see what happens

So I tested the motor and what I found is the 4in1 Hobbywing ESC has issues driving it correctly
Max thrust was around 700gr with a battery at 40-50% charge state, value that dropped with no reason at 600gr after 20 seconds (no overheat nor voltage sag)
Tested again with an Hobbyking F30A ESC I got over 1000gr of thrust (scale limit) with a fully depleted battery (10.4V)!!
Now let’s see if I can setup the ESC to work properly… 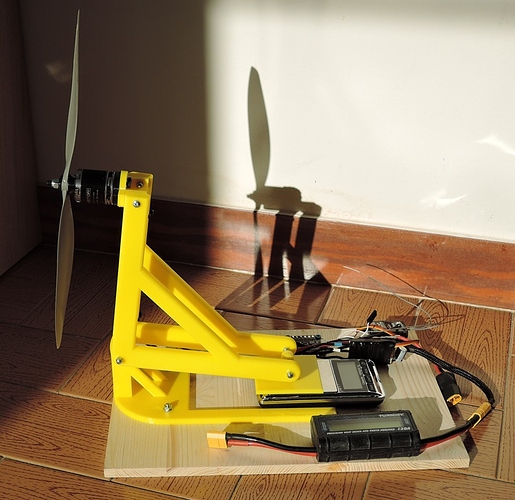 At least I hope this experience can help someone else