This is the parameter list of the white and blue tailsitter you can see near the end of dev thread. It has 2206 JX servo. Reliable and medium fast servos but gears get quickly some play. Nothing bad for the price.
DMTSjanv22.param (20.4 KB)
Problem I have with this plane is control surface fast oscillations after booting. Once in the air there is no more oscillations. To avoid oscillations before takeoff I use manual mode.
I compared your parameter list to mine. The first parameter I would change is Q_tailsit_gscmax and them try to halve pit_ff (and even more if it prove to be efficient) and yaw_ff. You already have pit_d set to a fair low value so the next in the test list would be pit_p.
You will see that I set q_a_acc and q_a_rate parameters much higher than you. It has nothing to do with oscillations but this is also something to test.
ES9258 is rated only for 4.8V. It will likely burn at 6V.

Thank you so much @losawing for taking time to analyze and advise. Q_TAILSIT_GSCMAX gain scaling was it! Setting it to 1 stopped oscillations and start working on regular tuning, keeping pit_ff low. Looks like need to keep pit a bit low to give more room to yaw. (may not be technically correct). Impressive how different servo make big difference. It was too windy to day to finish tuning but good progress. Valuable advice, I will update E VTOL doc.
Log tuning in progress
https://drive.google.com/file/d/19KXB2gJBumLuPKk6Ewy1qzWAFQrSqtnB/view?usp=sharing

ES9258 also keep whining for a while. Not good servo. Manufacturer changed sometimes ago to support 4.8-6.0V but they do not publish spec at higher voltage.

Hi Jeff and thanks for your sugestion

I just share a spec information of the two servos 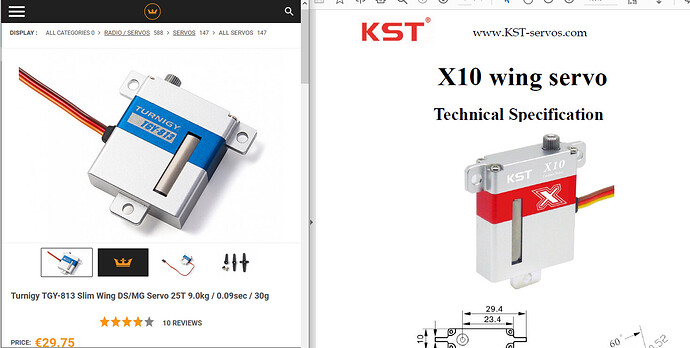 This type of the construction of the servo, it’s used on the very speed with best reactivity plane like: 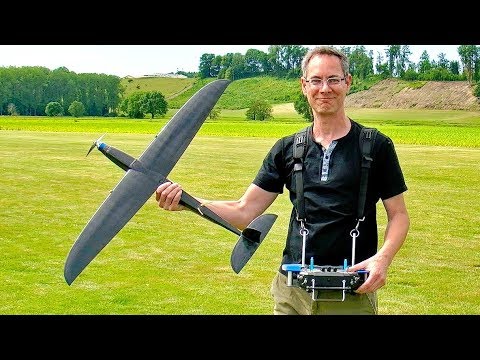 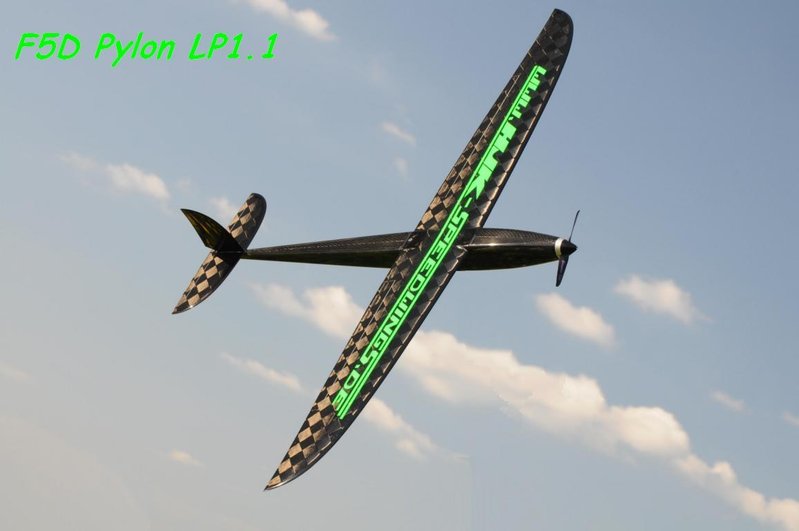 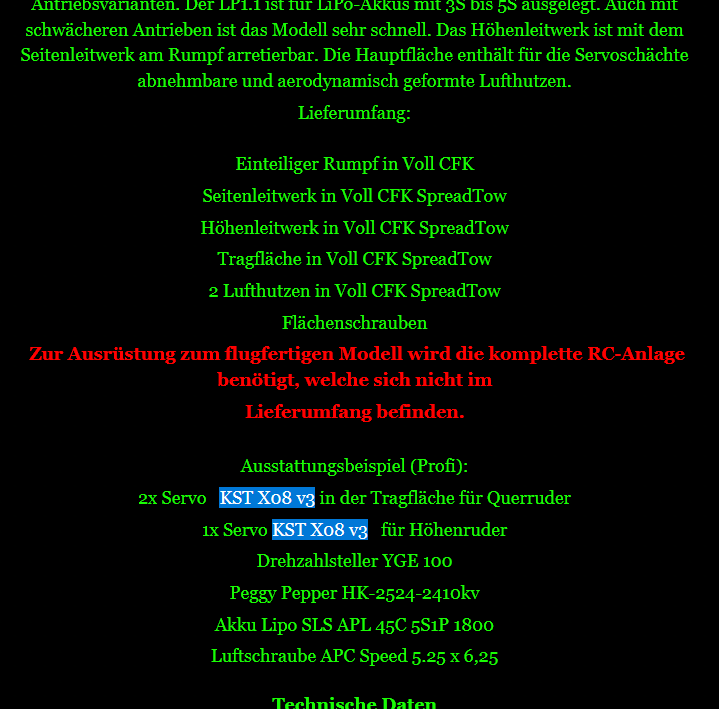 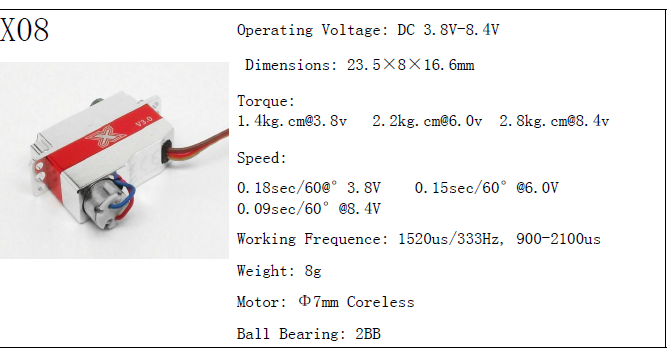 No problem at all.

Thank you for sharing this! I didn’t know that KST made a thin servo like that and it’s always good to have more options than be struggling to find stuff. 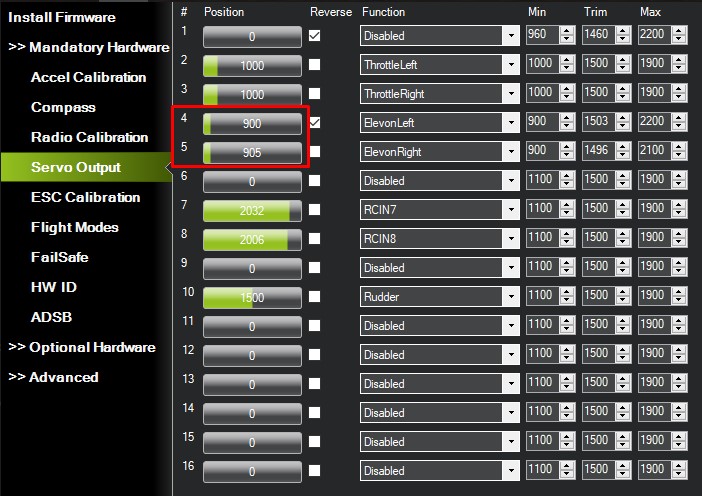 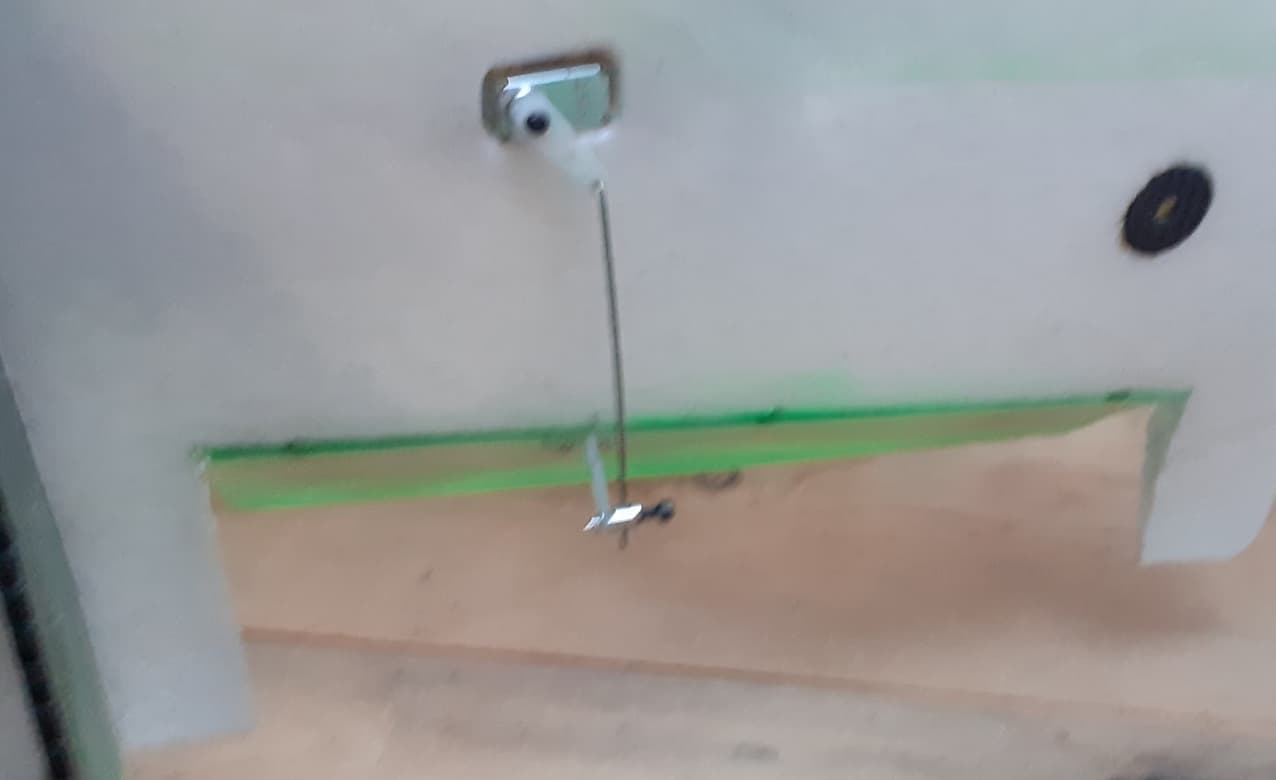 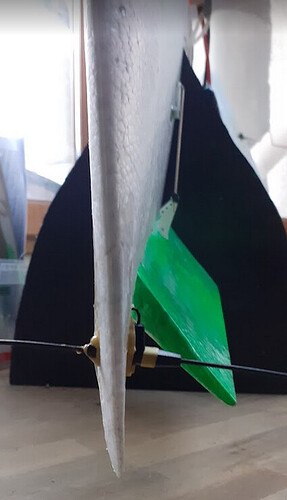 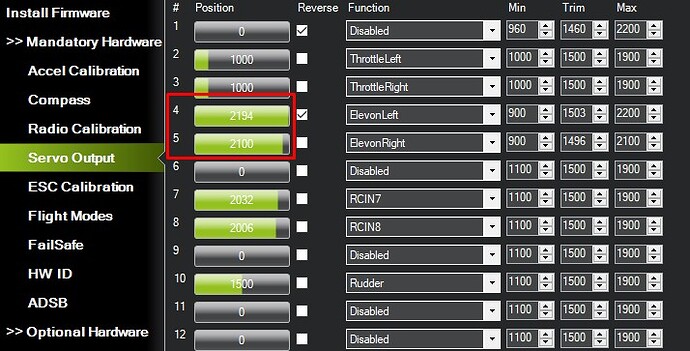 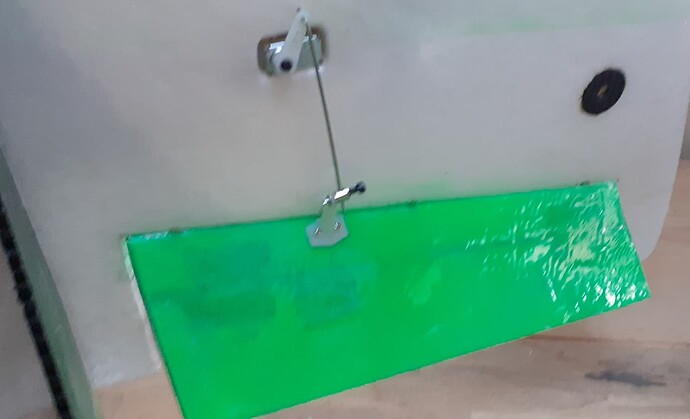 Hi Satoru and thanks for youtr return

I see you had scary moment in the first 15 seconds until you exit to FBWA yes, strange, but with 4.2dev version, the wing it’s like a spinning-top, it’s a real joke , at the limit of the fun / afreid ! I really think this experience very interesting and Great Thanks of the DEV IMPLEMENTATION EFFORTS Noticed you have very PWM range set for RCOUT.C4, 900 to 2200. Does the servo really move to that? it’s true, all the range are used [Mi…

Playing with transition tuning, wondering what is the good transition from plane to hover.
Found this Eclipson E VTOL plane is stable at high alpha (probably stalled) and can descend quick by simply pulling elevon almost full up in FBWA. Designer said he cared about good airflow. It will be nice if it can transition to hover without much altitude increase.
In this video, first transition is entered with normal horizontal flying speed, and resulting to climb too much. Second transition is entered after slowing down to 4-5m/s with quick descent. Transition is better without much climbing. (Struggling to point vertical though). 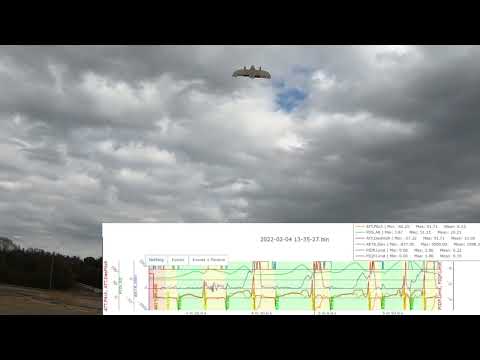 In next flight, I set Q_TAILSIT_ANG_VT=70, Q_TAILSIT_RAT_VT=30, Q_TAILSIT_THR_VT=40, setting transition rotation slow, hoping plane can slow down during transition. It can but I found it is a bit risky to have long uncontrollable transition period. As you see in the end, I started the sequence too low and plane ditched to the soil. Probably I should keep transition as quick as possible, and plan necessary slow down if I try waypoints later. 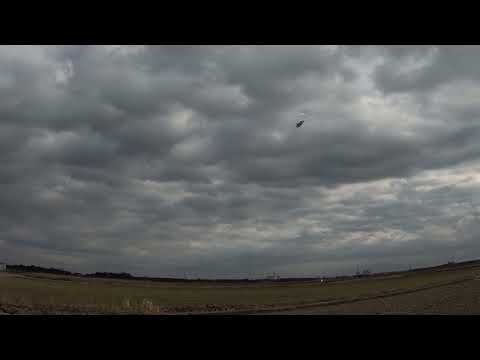 hi Satoru,
Your videos are a pleasure to watch.
My preference for back transition with minimal altitude gain are

I am still on plane 4.1 and I saw there are some differences with transition on 4.2 though.

I agree with @losawing that a fast rotation rate and low transition angle should be best for the back transition.
Did you use lightweight PLA for this build, and was there much damage from the crash? Also, what size battery are you using, and what is your flying weight?

Thank you @losawing, @kd0aij for advices. It is very assuring. I will stick to make transition quick.
The 4.2 new Q_TAILSIT_THR_VT helps avoid too much climb in transition but still entry speed matters a lot.

Yes, this is printed with LW PLA. Specifically I use either Colorfabb’s or 3DLabPrint one. Latter foams better and lighter. Surprisingly there was no damage in the last crash on the plowed soil. Only the pitot ate some soil. I use 2200mAh 3S battery, AUW is 850g or so.

Thanks for sharing the build and tuning issues with all of us on this beauty.

Glad to hear this can be a help!

I crashed config #2 with a mistake. This config has stronger and faster ES9258 servo. Had difficulty to kill oscillation, continuing tuning. Today I extended servo deflection by setting min max PWM 1000 to 2000. Started to oscillate and lowered pitch, yaw P, D as I was not sure which axis was oscillating. While continuing tuning in this flight, it became windy, I could not keep plane in vertical position in hover, made a mistake to exit to plane. Then I was not able to transition back to hover (plane does not keep horizontal position at all, face to wind as yaw is also weak). Finally decided to crash land to bush and failed… Should not transit to plane until hover tune is finished. 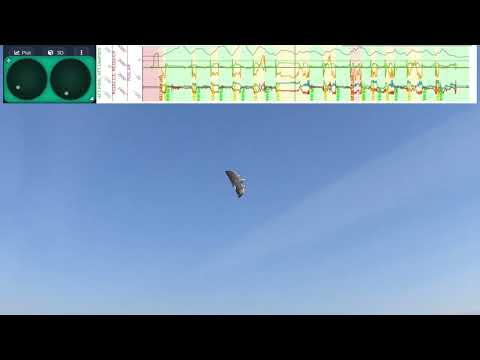 Log of this flight
If I check the log (of flight with oscillation), it was obvious only pitch was oscillating, and at least no need to decrease yaw P, D.

Hi Satoru, what do you think about the way the servos are mounted in the wings of the EVTOL? On my plane the servocovers are quite flexible and as the servos are only mounted to the covers this might result in a bit too much flexibility. Paired with a strong and fast servo, you could be chasing a good PID tune while the servo is mounted flexible in the wing.

I do not know. My config #2 build with fast ES9258 servo, the servo was glued to servo mount directly as it is a bit too large. Yes I see Eclipson servo mount can flex with force.
I rebuilt one with different fast strong servo (KST DS215MG V3). I mounted that on the servo mount. so I will find. At least this servo looks good, smaller but as powerful as ES9258, does not self vibrate when powered on. So I will restart tuning as config #3.
What servo do you use? 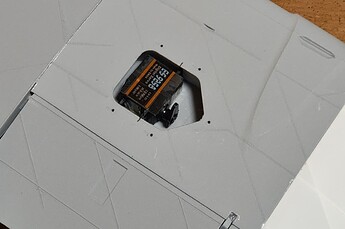 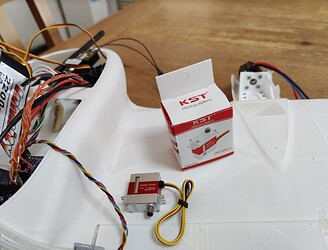 I’ve seen the same recommendation here and also ordered a set of DS215MGs with dedicated servo frame and alu arm. The retractable strut for belly landings also looks promising, so I can’t wait to try that. My plane is to find a decent PID tune in hover flight on a calm day before i switch to forward flight and then use Autotune for good PIDs in this flight mode. This should give the next back transition a better chance and if it doesn’t work I can hopefully try a belly landing. 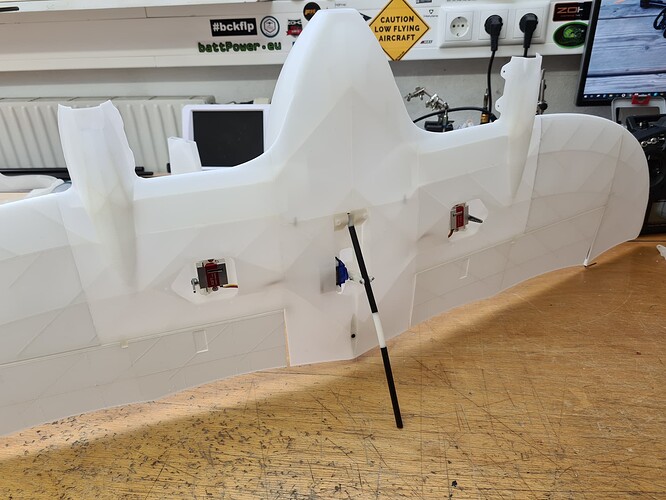 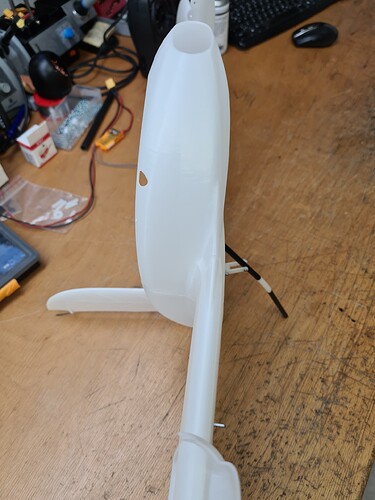 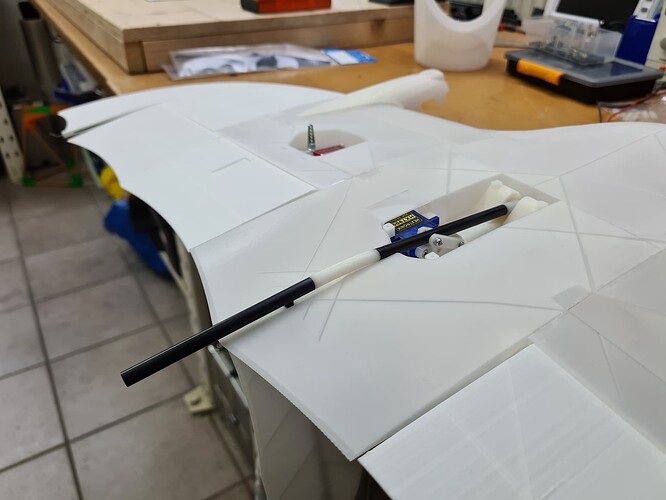 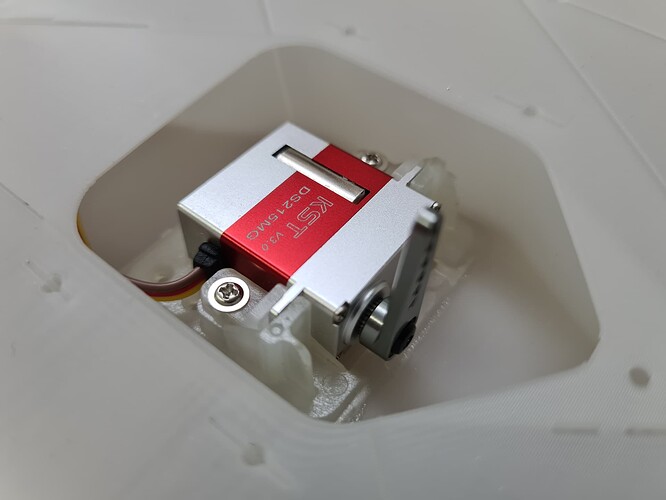 Wow, very very nice. I did not understand it was retractable.

I could not fly this weekend due to bad weather, looked into parameters comparing the one @losawing has shared. also went through Quadplane tuning guide process page. Set neglected FLT* filter settings etc, hope that gives improvement.

While weather is not good to fly outside, I am working on PID tune with gimbal indoor. Looks not good plane wing tends to vibrate/resonate a lot even at low P, D, looks like whole LW PLA airframe is not rigid enough for this strong servo. I reinforced around inner wing and try again. (Used Japan paper and thinned WBPU, works very well on LW PLA) If this does not work, will rebuilt fuse and wing1 with PLA like @3dcadfreak did, parts already printed. 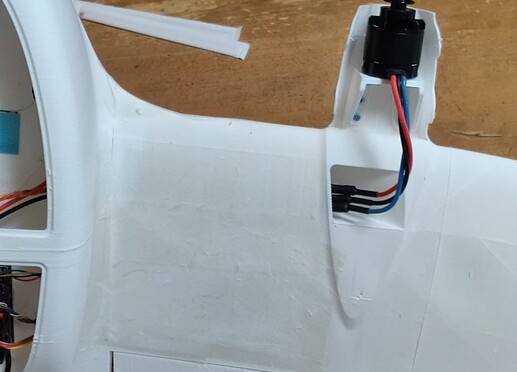 can you please post a picture of your gimbal setup for testing hover PIDs? I would like to try something, like this myself as the weather in austria seems to be similar to the weather in Japan

Very simple 1m 5mm carbon pipe and ~2mm steel wire hook. Use ‘Pitot tube holder’ part, glue aligning hole to center line. I am holding the pipe together with Tx. It will help the plane not to runaway. 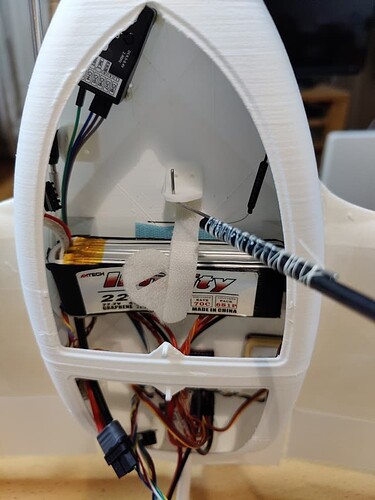 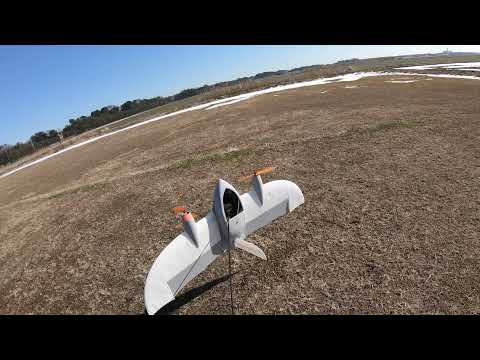