Sorry for my franglish wording
https://www.google.com/search?sa=X&channel=fs&q=fiberglass+reinforced+tape+350mm&tbm=isch&source=lnms&client=ubuntu&ved=2ahUKEwiy77ulm6HkAhVO1hoKHVqLAk0Q4216BAgGECM&biw=1319&bih=639
350mm roll width is more convenient. This is mostly done on EPP foam but I never practiced myself.

I do not see any reason for this behavior except a bad accelerometer calibration
A photo or a video would be great.
Mechanically speaking, larger distance between CG and pod rotation axis will give higher force moment so a higher efficiency either for pitch and yaw (earth frame). The longitudinal distance I have on this vectored tailsitter is about 20% of wing cord. https://youtu.be/0pJyAk8XwVQ
Plus or minus 45° for tilt motors is already plenty, more is only useful to land on the belly.

This was taking off from a belly landed state. I think it was just due to the motor pods not tilting far enough up initially. I did a quick test in the backyard taking off from vertical and it seemed to be able to hover nose up.

I do have another question, is there a way to set the trim for the motor tilt in forward flight modes besides just eyeballing it with the tilt motor trims? I believe activating Q_TAILSIT_VFGAIN would help with this but wasn’t sure if there’s another method I’m missing.

I am not sure to understand your question but my method is simply to adjust the neutral position I want with the servo_trim corresponding parameter. With an accurate level accelerometer calibration I suppose that servo should be neutral when the plane fly level. During the first flight I always make some straight line without TX input and check log servo output to see if servo are close to neutral. If not there is a problem.
I think VF_GAIN is not very useful. Elevon are normally very efficient on a flying wing. I used to set it to 0 or 0.2.

I just wasn’t sure if there was a tool to help get the perfect trim for the tilt motors to make sure they aren’t crooked. I did my best to level them with the chord line of the wing. I know the elevons can compensate but I’d rather get the thrust from the motors level if possible

Hello, back in the air again after the double crash.
This time with QRTL instead RTL.(In case of low level panic)
But with WP_SPEED = 700, losing altitude may be due to
the needed negative pitch. (700 in order to fight against the wind)
And even set Q_ANGLE_MAX to 1500 it pitches 20° and therefore loses also altitude when mooving
forward despite max Power due to the neg. Pitch.
Next trial: Autotune in FBW.

@lorbass I’ve been testing a quadplane feature which adds manual RC control of forward throttle in VTOL modes. My results so far have been good:

Flight testing of PR https://github.com/ArduPilot/ardupilot/pull/11763 This PR adds 2 new parameters, Q_FWD_THR_CH and Q_FWD_THR_MAX for tiltrotors to manually control forward throttle in VTOL modes. This is useful to counter headwinds without pitching downward with the associated loss of lift from the wings. This is a plot of groundspeed, battery current and pitch against the RC input with Q_FWD_THR_MAX =0.25 [fwd_thr_test]


although @GregCovey has run into problems (motors apparently stopping) with his Matek FC.

My mini-Convergence has the mRo X2.1 FC and my big Convergence has a Pixracer and I’ve observed no problems with them so far, with about 6 flights on the mini and ten on the bigger one.

@kd0aij, This is a good message, thank you.
I thought, why do we have Tilt units and bank the whole wing?

Please inform, when this feature is available in a next release.
I’m not in a hury, already enoughe other functions to test.
Regards, Otto

I’m now designing a plank wing (zero sweep) with the PW75 airfoil. I’ve just finished a layout of components (battery, payload, electronics, etc.) which gives me a static margin between 0-5%, aiming for 3% (=22% of mean chord). Does that sound sensible or should I try to allow for a larger static margin?

3 to 4% is the static margin I have with the JWL-065 airfoil. That’s sounds good also for the PW75.
Elevons must not be sloppy so it is important to choose servos with good gears and to make a link short and rigid. With a low static margin and very large elevons you will find that the usable elevons throw is only 20 or 30 pwm when flying as a fixed wing. When you will test hover, begin with max_angle around 20°, make some pitch pumping back and forth and observe how the wing recover. If you are happy with the result, increase max angle by 10°. Good luck.

Yeah, it makes flying in manual quite difficult. Is there a way to configure different pwm limits for fixed wing flight?

What kind of transmitter do you have? If it’s OpenTX, you can program it to reduce throws when in manual mode.

My non vectored wing fly poorly in manual mode, As mark suggest I have elevator throw reduced to 20% plus 50% expo when in manual mode but the wing is not very stable. I suppose this is due to servos I use and CG close to the after limit. Most of the time I fly q_hover and FBWA. Q_acro is very fine too as you can fly as a fixed wing with a manual feeling and the advantage of stabilization. Just q_acro is not easy to begin, the safe way is to switch from fbwa to q_acro and exit to fbwa again.
With your FX-61 do you hover with q_stabilize or q_hover ? Q_hover is my favorite mode with q_velz_max=100cm/s

Thanks, that’s a smart idea. I have a Turnigy 9XR, I think I could program that in.

I wouldn’t normally fly manual except to feel if the CG is right. I usually use QLOITER for manual takeoff and landing and then FBWA or FBWB. QHOVER is good to see if the balance/trim is good, but if there’s much wind I find it pretty difficult. QSTABALIZE I struggle too much with the throttle haha.

Skywalker VTOL Test 44 Autotune trial with horror surprises.
Three times uncontrolled right turn, one time with a radius of about 5m !
This could be a new aerobatic figure 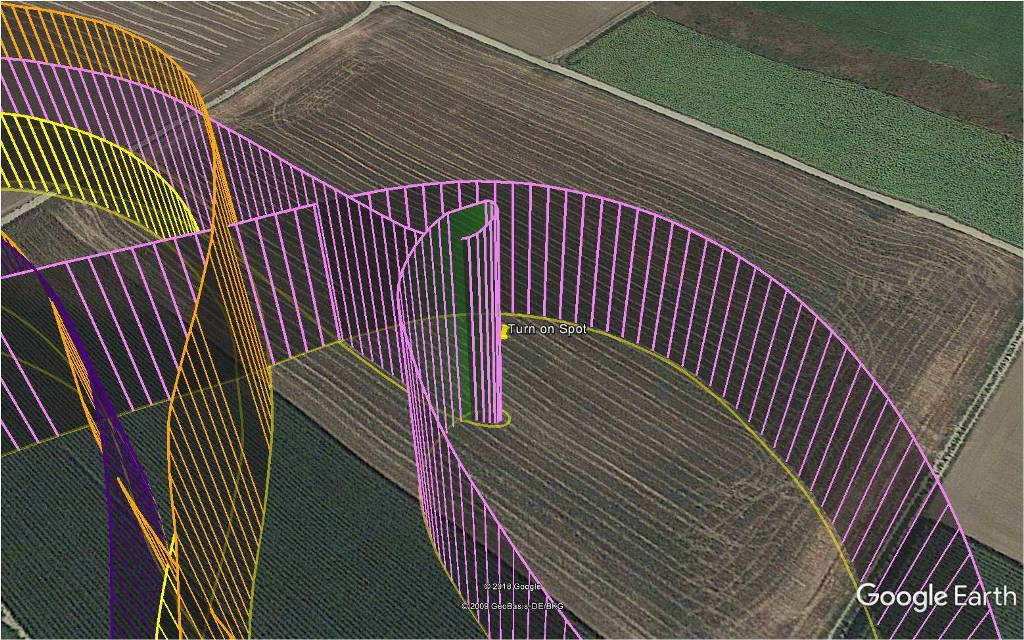 Turn on Spot.jpg1024×640 177 KB
Same issues as already known, but this time without damage.
Now, I will replace the distorted left wing. May be this is the reason also for the “asymmetrical” elevon deflection.

Autotune was not successful, perhaps wrong commanded due to verry aggresive reaction when
stick moved. (not slugish as in the Wiki described)

Hi Otto,
is that still the frame with the bent wing?

The aileron at servo1 runs far outside the trimmed value (1500):

This causes the Roll-Integrator to run at high levels and then maybe not be fast enough.

Of course that’s just a hypothesis.

What do you mean, with sounds not right?
I’ve checked the current. It increases when the wing is slower (Roll or Pitch, also Spiral) and also the noise.

@Rolf,
Yes, still the bent wing. I assume, without the elevons would be even more deflectet.
To eliminate this possible reason I’m working on replacing the left wing.

Therefore the wing shifts with the left wing in front even with exactly the same ServoOut5,6.
I had also this impression from the ground while flying over me.
May be due to a thrust difference of the motors/props (or the bended wing).
Winglets and Rudder can help mostly, but when the Pitch changes it produces a roll.
Then the air current comes even more unter the wing and
produces an uncontrollabel roll.

In order to be shure, i will replace the bended wing and measure the thrust of both drives on the thrust stand. https://youtu.be/4m5KYAmtXiU

Here my test with the BLHeli ESC.
I was told by “vierfufzig” that the indication of the RPM has to be multiplied with the nr. of Pole Pair.
Nevertheless is a difference of about 10% between Thrust Stand and MP.
On the left in the Video: https://www.banggood.com/Racerstar-Brushless-Motor-Thrust-Stand-V3-For-11mm-59mm-Outrunner-Motor-p-1168758.html?rmmds=myorder&cur_warehouse=CN
On the right in the Video: Tablet PC with MissionPlanner connectet via USB to Pixracer.
https://youtu.be/-W01FzLOOqw