It looks to me as though an elevon servo might have failed, since the vehicle doesn’t seem to be responding normally to the servo ouputs.

I can read the truncated logfile given by rollf, thanks @Rolf . What I looked at:
Airspeed is Ok but does not match GPS speed: some wind ?
Tilt servo 3 and 4 does not move in FBWB mode: OK
Power is OK
No vibration
Motor output servo 5 and 6 seems to be behave normaly
Tail motor (servo 7 or 8 ? ) does not spin during fbwb.
From time to time pitch and desired pitch does not match closely. Stability problem ? Did you check the CG?
Probably more important, your motors run very high in hover mode: around 1800 (line 485000) or 1850 (line 600000) probably too much to ensure stability. They seems to run with higher and higher pwm values as the flight goes on.

Thanks for all help.
Due to the truncated Log from Rolf, I could make a video with gauges.
@kd0aij,
I have tested all servos, now all works well.
@losawing,
Yes, there was Wind of about 3 to 4 m/s. (Fly away after touch an go)
Tail motor is on ServoOut 7
Yes, DesPitch and Pitch are not always convergent, same CG as with Tailsitter, but seems to need more P Tuning because no help from fixed Tiltmotors. but nevertheless good Transitions.
Motor Props full Trust at 1900 PWM 1620 gr each. Wing weight 2930 gr. measured on a trust stand.
PWM my increase during Flight because of sinking Voltage.
As we can see, the elevons also work in QHover (together with the tilts), why?

The quadplane controller also uses the control surfaces in VTOL modes. This is beneficial if you have some forward airspeed, and the control movements are attenuated at low airspeeds to avoid problems when moving backwards.

Here is a plot of elevon servo commands vs roll for the 3rd FBWB segment. It looks like there’s a trim issue since the elevon outputs are near max at -45 degrees roll, and close to neutral at +45 degrees. 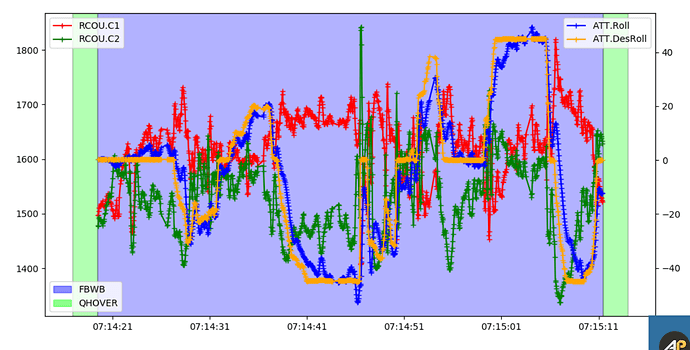 @kd0aij
I anderstuud. Should be the same but inverse.
In level flight the elevons show 10° up. May be this explains the offset?

Have you remarked, as first of the second issue, VIBE Z inkreased, then the Tilts move at max back (left) and 23° for (right). May be to compensate the right turn perhaps of a broken Tilt (right) due to the hard touch and go.

Hey guys!
Just a small suggestion. Can we keep this blog only for dual motor tailsitters? It’s getting all mixed up! For someone who would read discussion after a long time, it feels all chaos.

@kd0aij,
When hovering with vectored Yaw, the Elevons works also. But without effect in a VTOL Tri Tilt…
Do I have some Params wrong?

I think it is intentional that quadplane ailerons/elevons are active in VTOL modes.
This is beneficial if you have some forward airspeed, and the control movements are attenuated at low airspeeds to avoid problems when moving backwards.

Does that answer your question?
Sorry for the delayed reply, I’ve been vacationing lately.

Thanks for the answer.
Yes, may be has to to with the level, they move independent to the Tilt.

Even if it’s a tri copter, it’s interesting. Finally what was the issue ?

First issue, not able to get out of the right turn and later spiral may be a week Pitch Tuning in FBWB.
Secon issue, crash on the roof. May be damaged at the hard touch and go before.
1/2 second bevor the Tilts move hardly the VIBE Z increased and then right turn even the Tilts wants
to turn left.
But amazing, both issues starts with turn to the right.

Beside the broken right Tiltunit and Prop and the back Motor carrier no mechanical damage found.

Will change to BLHeli32 ESC with Telemetrie soon to get more infos.

Hello. I need some help. I have a VTOL Tailsitter with dual motors. It is a custom frame. I have only tested in the hover mode and it has some oscilations on the pitch angle that are the worst and make it crash very easy and some on the roll angle.
Is there a way to config the PID from the log file? Can anybody help me with it? I don´t know how to read it or what to look there.

Here is the link for one of the flights: https://1drv.ms/u/s!AhxpE1thbKj6v6A9seeh5sh2Rnp92Q?e=yhCp1B

q_a_rat_pit_p parameters converts the difference between desired pitch rate and actual pitch rate into a servo throw. When this parameter is set to high you get pitch oscillation. The same for other axis. You can get oscillations also when pit_d is set to high but at 0.0036 it should be OK.
You may read several time the Q parameters list
http://ardupilot.org/plane/docs/parameters.html
until you get an idea of the role of each one.
I had error when opening your log but it seems to me you tried to fly auto mode. Is that right ?

My FX-61 phantom still has a problem getting stuck in an attitude it can’t recover from, if it pitches forward by more than 30 degrees or so it can’t pitch back up to vertical. It might not get stuck for very short back and forth movements, but as soon as it gets over 2-3m/s speed it will not be able to recover without a big throttle up. I think I understand what’s happening, the wing starts to produce lift and the centre of pressure is too far below the centre of mass (especially with swept wing), the ailerons can’t produce enough force to rotate the plane back up. I’ve read all the great information @losawing has posted, and his batwing design flies amazingly well (post 1475), but I have no experience building wings from scratch. I want to stick to non-vectored to keep weight down.

So my plan is to get another FX-61 and rotate the wings forward (remove the sweep) to make more of a plank, and not extend the ailerons but cut larger ailerons into the wing (using the wing itself, to maintain the airfoil). My question is; is this a waste of time with the FX-61 airfoil (it’s a flat bottom)? I know it would be better to use a more symmetrical airfoil with a smaller static margin like PW75.

An airfoil that allow to reduce the static margin is a good choice. To cut foam wing core is not a big deal and to glue the wood skin I use 3M77 spray so I dont need vacuum bag. For combat wing most people just put a trammed adhesive to cover the foam core.
Nevertheless, 30° is not so bad and you can probably improve this number. As @lorbass said large elevons with ± 45° throw are mandatory. Fast and accurate servo may help too. Did you tried to move the CG backward until the FX-61 become unstable as a plane and what is the actual static margin. One solution to test the stability vs CG position is to fly the wing in manual mode but be careful, when the situation comes very bad the pixhawk is not able to recover.

If the elevons are original, then they are mucht to small. 1/3 of the wing would be better.

The ailerons are about 1/3rd of the wing but I got that by extending them. I think that was a bad choice, it means there is more area below the CG to catch the wind during hover. Next time I will cut larger ailerons out of the wing.

I had that problem, the CG was too low (in the belly), so I dropped the motors, but now the thrust line is under the wing. Is it also important that the CG (and thrust line) goes through the middle of the wing?

To cut foam wing core is not a big deal

I found some youtube videos of hot wire cutting by hand, and nichrome wire looks cheap, so I’ll keep thinking about it.

Google’s not giving me much on this one

Fast and accurate servo may help too.

I could probably get better servos, they have a little bit of slack which I think is causing oscillations sometimes.

I haven’t been able to move the CG back that far, I’m stuck with the battery next to the spar because of where I’ve put my payload (camera) and the autopilot, it’s all a bit tight. I will be able to move it more in the next build.

Thanks for the help, I really appreciate it.

Hey everyone, I converted a plane to a tilt motor tailsitter, but on the maiden it struggled to stay pointing nose up and would pick up a lot of forward speed. Currently the pod rotates about 45 degrees up and down. I’m going to change it to have a lot more up to make sure it can keep the nose up. Is there any sort of rule of thumb for how far behind the motors the CG should be? I think it’s about 2 inches behind the prop right now when in normal forward flight, do I need to increase the pod length? The CG is about 1 inch below the motors, which I know will make it want to lean forward a bit but I thought the tilting motors would compensate.