Hi, Tridge, a tuning question,in stabilize mode when I move the control stick very slightly in pitch or yaw the serfaces are moving very quickly and more than they should then they settle to a more proportional position,can I tune that behavior out, if so how? also tryed to download latest and got a printout of the code not the usual download, and in mission planner when you go to download the links go away? Thanks Rick

I’m trying to build my first VTOL plane with a delta wing with non vectored motors.
I have a weird problem with 3.8 firmware.
One of the motors move a little when the system is powered but not armed.
The two esc with BlHeli have the same config and calibration 1000-2000 ms.
Motors are on servo Output 1 and 2.

In FBWA mode the two motors start always together while in Qhover or Qstabilize one of the motors, the right , start to turn when the left one has already started .
Sometimes a lot, 200ms later, sometimes it start almost at the same time .
Then it seems that the right motor push quite a lot less.
Other times the “lazy” right motor do not start at all, but if I change to FBWA mode it start immediately, run smoothly and push the same .

My maiden flight in Qstabilize ended with a crash in a tree, the plane was very difficult to control .

The motors should be connected to output 5 and 6. Output 1 and 2 are for the elevons.
How to do is described in earlier posts.

In QSTABILIZE or QHOVER my motors do not start always a the verry same time. Just a little bit
different. May be it depends how the wing ist lying on the ground.

The center of gravity must be exacly in the center view from the side when sitting on the back.
The elevons should be larger than with a standard Nuri.

For a small wing the default Params for Q_A_RAT_P … I…D are to high and therefor the wing
makes strange wobbels.

Here my newest Video about the tuning of the Pitch.

or other tryels and errors.

Need more wihtstand than other “toys”

My first 6 flights ended as crash.
I didn’t dare to use FBWA mode. I wanted to be sure, that in case of trouble I can sucesfull switch back to QSTABILIZE
Good luck
Otto

Thanks Otto for suggestions,
My wing is 130 cm wide.

I tried also with motors in 5 & 6 output and elevons in 1 & 2 with exactly same result, so I do not know is it an hardware error of my Pixhawk but I think it might be more a software/config error since in FBWA the motors are perfect.

In Qhover the motors start to really push the plane up when throttle is much above 50% , perhaps 75% and then it accellerate very fast.
Do not think it can be possible to fly for me in Qhover .

In Qstabilized the elevons position is not neutral for both , one is quite a bit off while in Qhover they are much more similar.

Is a GPS mandatory as I read in Quadplane docs ?
I do not have one mounted and disable it since when vertical position the Gps would not get a good signal but only reflections .

Tomorrow I will change the Esc and the flight controller and I’ll try again.

BTW Otto, finally how did you solve vibration loop when in vertical position ?
I already have digital servo but especially in Qhover that vibration loop due to servo movement are terrible, in FBWA they disappear.

My problem of the right motor that do not turn as the left one seems tobe solved, it depends upond the attitude of the Pixhawk, when it is levelled the motors start together.

Qhover is a big problem , motor output is completely wrong, from 1000 to 1500ms the motors do not accellerate then they suddenly go to 2000ms !
Take look at the image and compare Qhover with Qstabilize 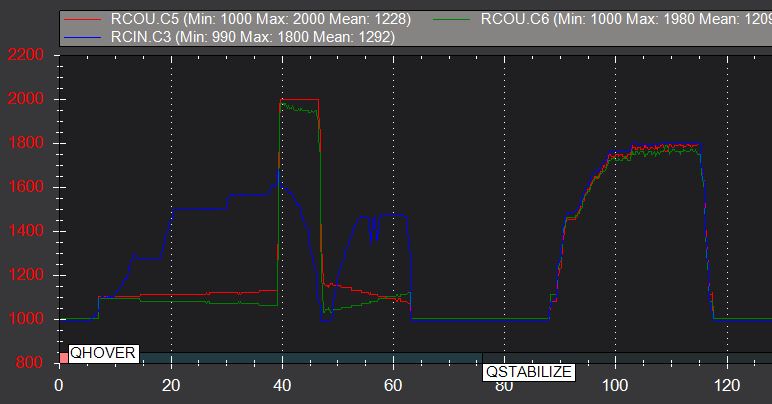 better use GPS ! ALTITUDE (rather attitude) estimation won’t work well without GPS.
How to configure a flying wing without ELEVON_OUTPUT?

My GPS has no problem to find enoughe Sats (15) even when vertically and in the feld.

In my last Video you can see in the middle the canceled starts with heavy Pitch vibrations.
And then how I did correct it. Mainly because the Params P or D are to high.

Currently I fight against the Pitch Vibrations during forward flight as you can see in the pics.
I make serveral test flight with different Params. Afterwards in the Log I can see which one is better.
In this time flight no 5. Pitch P is now at 0.05 and probably always to high. Who nows?

I do not yet start in QHOVER.

Some videos of the Stryker non-vectored tailsitter that I may not have posted here before:

This one shows improvements in hover agility and control after changing to digital elevon servos:

Thanks for your replies guys.
Here is my wing 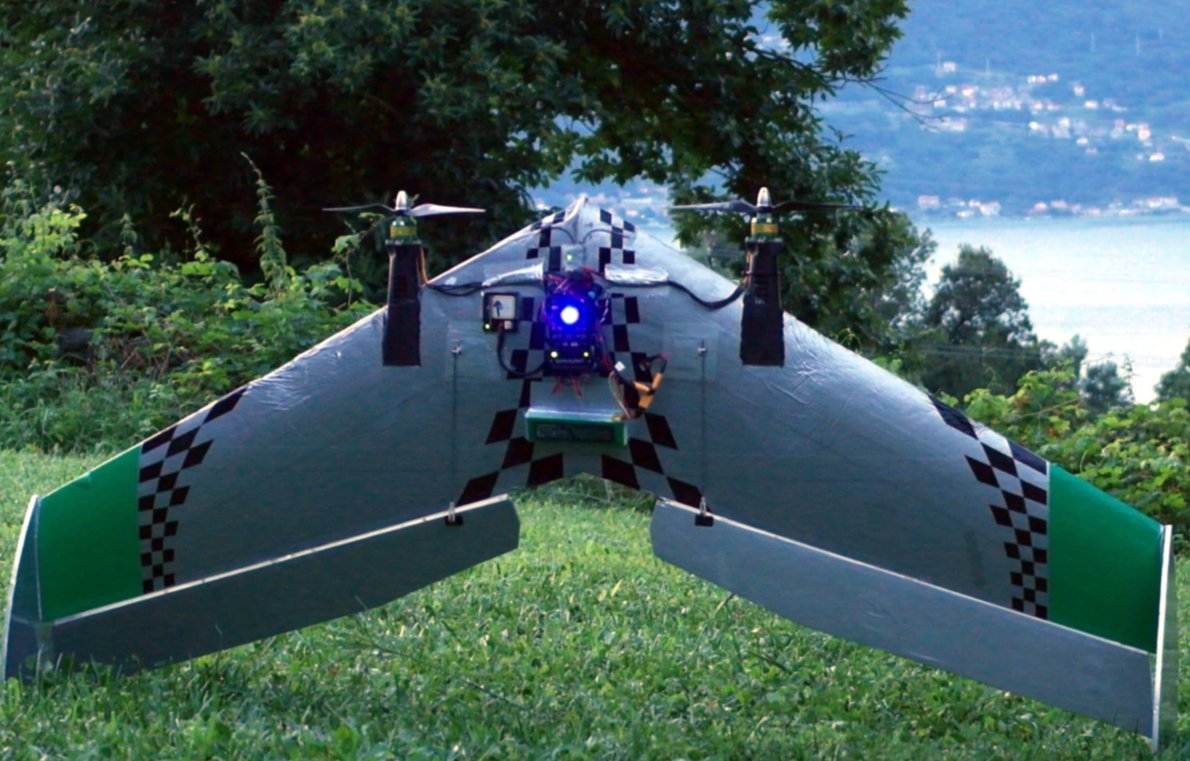 I have install a Gps .
I tried to engage Qhover after I was holding the plane in Qstabilize at 1 meter from ground but as soon I did it throttle when to maximum.

I have different problems in Qstabilize:

I did a short video , sorry for bad quality , at the end you can see (hardly) the plane transition , please note the increase in RPM while I did not move throttle stick.

I changed the motors with more powerfull ones, now hovering is about 60% .
Still have the left motor that moves a little , 1 rpm , while non armed or armed.

I found out the reason for “auto” transition.
The Pixhawk corrects in the wrong direction pitch control.

I hang up with a thin Nylon rope the plane and did a test while in Qstabilize.

When the pitch angle become important moving the plane body by hand then the correction goes in the wrong direction and the motors accellerates trying to correct more and more but in the wrong way, as you can heard in the video.
Q_FRAME_TYPE = 1 , does that matters ?

This parameter is used for Multikopter and means X configuration.

thanks lorbass,
I have update my parameters with the one you suggested.

Unfortunately I still have the same problem .

When in Qstabilize after some seconds of hover I loose control of pitch and the plane attempt to fly levelled after increasing motor speed.
I suspect because the pitch authority is poor , pitch correction via elevons is not enough .

I must take off holding the plane by hand because I need to adjust the yaw since it is not neutral .
How can I trim Yaw ?
Is it normal that when in Qstabilize , yaw command move the elevons only after take off ?

@tridge Re: Dual-motor tailsitters has parameter Q_A_ANGLE_BOOST been removed? I can’t find it in master.

@lucamax Don’t worry about yaw control response before takeoff; it will do the right thing once you get off the ground, even if it looks wrong to start with. The pitch problem is most likely to be due to lack of elevon authority; see the posts above by @lorbass and his decision to go with vectored thrust.

This one shows improvements in hover agility and control after changing to digital elevon servos:

Did you also raise the output rate for the elevon servos? In the 3.8.0 release you can set that with the SERVO_RATE parameter. Paul found it made a significant difference for his vectored tailsitter.

@tridge No, that Stryker flight was on 14 May, and the log shows no SERVO_RATE parameter. I’ll plan to use a rate of 70Hz for the Convergence, since that is what the stock controller was using.

Need some help here.
I really do not understand, each flight the same, the plane after a while loose the pitch attitude , motors increase rpm and the plane tends to fly horizontally with a kind of auto transition and finally a crash.

After these changes in parameters and some refinements in plane elevons trims I was able to fly nicely without wind in Qstabilize , Qhover and did a perfect transition to FBWA.
Here the changes:
Q_A_ANGLE_BOOST - from 1 to 0
Q_TAILSIT_ANGLE - from 30 to 45
Q_ANGLE_MAX - from 3000 to 2000

The purpose of these changes was

The plane flies well in FBWA mode without any Pid tuning even if there was a strong wind but the transition to FBWA back to Qhover failed and the plane in Qhover was out of control .

I do not know if the above changed parameters have a negative inpact on FBWA to Qhover transition.

With strong wind it appears to me that it is very difficult to fly a non vectored dual motor tailsitter .
My plane tends to tilt on pitch axis when in Qstabilize and again go in auto transition .
If the wind hit the plane perpendicularly while in Qstabilize the generated force is by far much higher than the one generated by props airflow on elevons trying to maintain pitch attitude so I guess only vectored motors can fight with that force.

Congratulation, I was not succesful so far.
You have more courage than I.

I’ts a shame that “professional” do not want to help (or are not able) as we can read back.
A development is succesful only when confirmed in practice.
And practical tests also need time AND money.
Thats the reason why I stopped posting issues.

I wish you a lot of fun
Otto

I guess only vectored motors can fight with that force.

That was the reason why I changed from Tailsitter to vectored Tailsitter.
Or look what large Elevons they have here:

After these changes in parameters and some refinements in plane elevons trims I was able to fly nicely without wind in Qstabilize , Qhover and did a perfect transition to FBWA.

I do not know if the above changed parameters have a negative inpact on FBWA to Qhover transition.

the small Q_ANGLE_MAX may mean the plane is unable to hold position well in wind. How much wind it is able to handle will be very airframe dependent.

With strong wind it appears to me that it is very difficult to fly a non vectored dual motor tailsitter .

yes, that is indeed a problem. Even with vectoring it is challenging with our current control scheme. I’m hopeful that the new TVBS control system that Paul Riseborough is working on will handle wind a lot better.