I have a setup with a fixed-wing dual motor drone which I want to power using a single Lipo battery. When I throttle up, however, above around 60% the motors start stuttering and don’t spin smoothly anymore. A video of the problem can be found here.

The setup I am using consists of:

A picture of the wiring can be seen here: 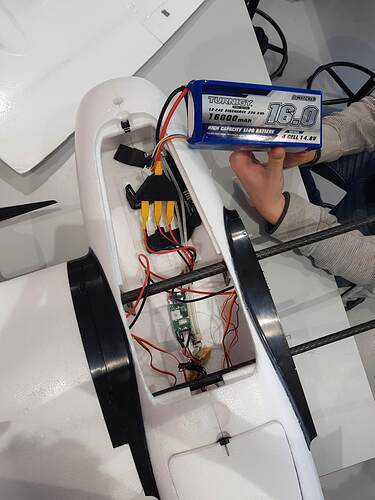 I have tried numerous configurations, and measured the current through the wires using a current clamp. The configurations are listed here:

Configuration 2 → Problem does not occur:

Configuration 3 → Problem does not occur:

Configuration 4 → Problem does not occur:

While you could say that using separate batteries for each ESC (Like in Configuration 4) is a solution to this problem, it is undesirable for our application since it will weigh more, and take up more space. Configuration 4 will also introduce a possible problem when the batteries are not charged to the same voltage.

Measurement 1 and 2 seem to convey the same data, where if the current going to only one of the two ESCs is measured is about half of the current that is being drawn from the battery in the same configuration.

I am truly at a loss what could be the cause of this problem. I have debunked the following hypotheses:

I would love to hear from you what you think the problem might be!

Just a wild guess, but do you have another three way splitter or another power distribution method? Is there anything fancy build into the 3 way splitter? Diodes, anti-spark circuit etc.?

The splitter is a diy part. It’s a simple parallel connection of XT90 connectors with nothing special inside.

I used to have a crappier version of the splitter which I thought could be the cause. That’s why I made this one, but the problem remains.

Hi Ivo,
I have just seen which BLHELI ESCs you are using. I can only warn against using these Multistar 41 and 51 BLHELI_32 ESCs for more than just disposal. Several people including me had several times total failures with these ESCs. eg: DShot and BLHeli ESC Telemetry support - #43 by Naterater

Thanks for your concern Rolf,

I will keep this in mind. But do you think this could be a cause for the problem that I’m having?

I do not have any capacitors on the ESCs. Would this be able to resolve the issue? I’m not very experienced with Electrical Engineering myself, but could it be harmful in any way if I attempt this as a solution?

No. They are not be harmful unless you add way way too much capacitance. If you look at most higher end ESCs you will find 1000 -1200 uF total capacitance.

This post from RC Groups was quite good and means I don’t have to write it myself.

From what I also read in your linked post is that long wires could also be the cause of my problem.

I think will try to shorten my wires, and additionally add capacitors if necessary. Will keep you posted on the results.

Thanks for your help everyone!

Yes, short wires are important specifically from the ESC to battery. I still might add at least one 680uF capacitor given your application on that ESC.

But remember there are other considerations too like electrical noise and interference caused by ESC onto your radio systems. (If it gets near your wireless systems.) It can be beneficial to keep the two separated.

I’m 99% sure you will solve this issue by adding a large capacitor directly to the ESC power input pads. I’ve seen the same behavior when operating BLHeli_32 ESC’s at higher voltages.

Hey everyone, thanks so much for your input!

I replaced the wires from the splitter to the wings with a thicker gauge, and shorter leads. After I did this, I tested again, and the throttle problem occurred after about 85% instead of 60%, which was already an improvement.

After that, I added three 470 uF capacitors in parallel to both ESCs. This COMPLETELY SOLVED THE PROBLEM! I used these with a 470 uF capacitance.

Below a picture of the capacitors near the ESC: 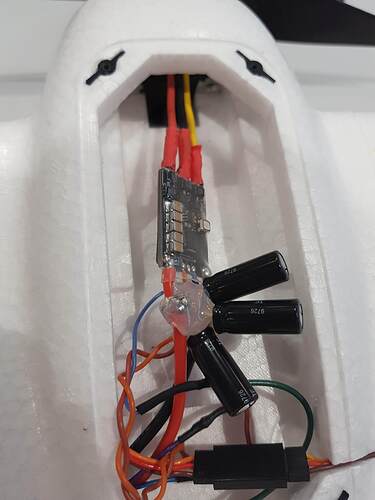 And a picture of the new thicker and shorter wires: 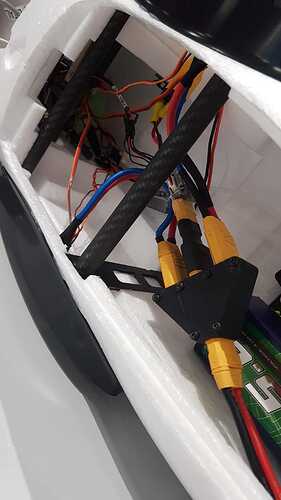 Thanks again for your help guys!