When doing research about why people still prefer using Lipo instead of Lion in copters, I have found something relating to “voltage response” of the battery pack. Generally, it represents how fast the dynamic system in copter reacts when using specific battery. 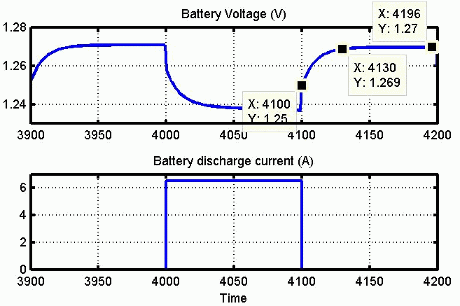 People always state that “in multicopters, lipo is faster and more suitable to use instead of lion” but I have not found the satisfied answers. In fact, compare to lipo, we can pack a lion package that has more power density and even lighter which it offers the same discharge current.

If someone has realized the same issue or have experiented the difference in response time between lipo and lion, please advise.

Usually the problem with li-ion is that they cannot deliver the peak currents that the UAVs need. And are slower to charge.

Yes it was.
The battery package we made offering peak current twice (but it was never reach that point) than peak power the system needs. It is practically tested.
My concern is about the delay in voltage the li-ion may cause which is higer than li-po. Therefore, this lag will affect the entire system.

And generally in multirotors the battery is quite close to the compass, so if you calibrate with the Lion on one position then ever change it, even slightly, the compass will be wrong.
I’ve seen Lion packs where hot spots build up, particularly cells in the middle of the pack where they dont get cooling, and this causes failure.

You are totally right at these points and I have encountered those problems since years. Now my compass is getting better because it is mounted far from the battery, using more advanced compass and I also have the dual GPS for yaw.
The thermal design of Li-ion is a huge challange (for all of HV applications) that we are dealing with. When almost reaching 4C of the discharged current, the cells may get 70 degree C. However, we just need 1/2 of this power for out copters.
My concern is about the response as stated in the first post. Should I arrange a test in single cell first.