DMA on a Pixhawk

here’s the DMA table from the cpu/chip manufacturer: 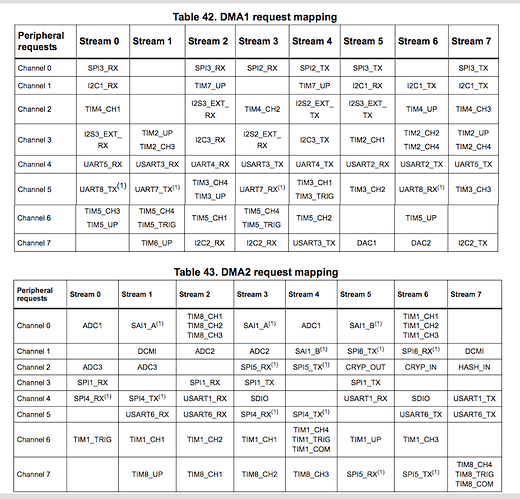 @DavidBuzz Get this on the wiki, please

too relevant to be “lost” here.

It’s also worth noting that the pixhawk2 ( fmu-v2 or v3 , depends) and pixracer ( fmu-v4) boards have a slightly different set of DMA assignments, but are pretty similar generally.

I don’t have complete DMA table for the pixracer (fmu-v4) but here’s a change that was made today that tweaks the assignments on v4:

Hi, I’m a complete n00b to Ardupilot. I watched a video on YouTube that states that I need a UART that has DMA access to make a CRSF receiver to work. How do I know which UART is the one that has it on a 3DR Pixhawk PX4?