DIY Li-Ion batteries for use in UAVs and math 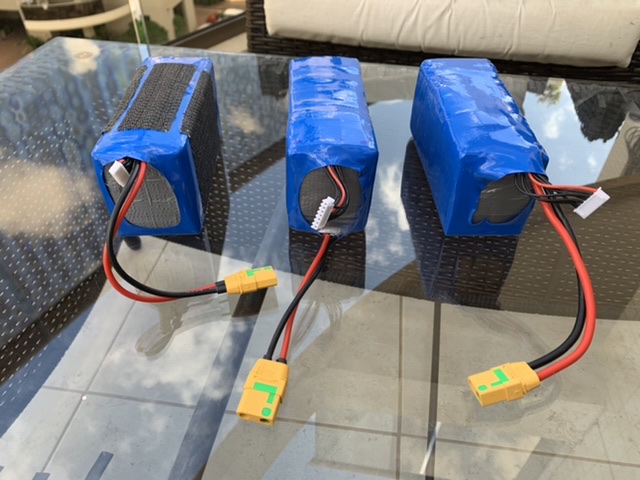 While getting some treatments in the hospital I got involved in a thread about Li-Ion batteries and it simply gave me an idea to start a little on going blog on this issue.

Lately I’ve built my self a few 3C 12000 mah 6S4P Li-Ion batteries for my V8 Quadcopter to be used 2 bricks at a time both for redundancy and more importantly with one brick only the discharge rate will be too high and may destroy my packs very fast.

basically these batteries are rated at 10C by the manufacturer but my design for usage is for 3C max, so if the total discharge rate of my quad is higher than 36000mah (40-50amp/h) I would have to be seriously worried about the temperature of my packs. So by using two packs in parallel I can pull 72000mah and stay safe.

Disclosure- I am not a specialist in this field simply put just technical person with some understanding and truly hope my findings are correct, however do comment for any mistakes and misunderstandings I have.

The big difference between Li-Ion and LiPo batteries is of course the chemicals which stores the electric charge inside the battery (density) and the effect of how fast the power is discharged from it.
Li-Ion batteries has a bigger density and lower cutoff (point of no return) for the battery usually at 2.5-2.8v
where LiPo at 3v, below the cutoff you kill the bat.

LiPo can discharge much faster than Li-Ion and that’s why it’s the de-facto standard for UAVs, usually the C rating for LiPo starts at 15C where Li-Ion 1-10 max.

So this is the basic math, however there are more facts in the manufacturer’s data sheets, like temperature cutoff which means the highest temperature the battery can get before damaged (usually it requires temperature protection).

Got to go the chemotherapy now, to be continued

Very interesting ! Thanks for sharing.
Do you the reference of the cells you are using?

, so I couldn’t continue the article, however to answer your question, yes I use the Sony/Murata US18650VTC6 which is a 3120mah nominal capacity and a C rating of 10C.

I would never try to discharge it faster than 4C though, since at 10C there is a cutoff at 80 degrees Celsius and it means you would need to add temperature measurements to the pack.

Gal hope things are going well for you.
So can yo walk me through your thinking.
You machine…first describe what your flying and the motor max current. I am trying to connect the dots on how you landed on these batteries.
Also where did you get the batteries your using. I have not found a 3120mah version of the 18650vtc6
For me I am going to fy a quad running 4 Gartt 5010 motors, 6s with 18 inch props. 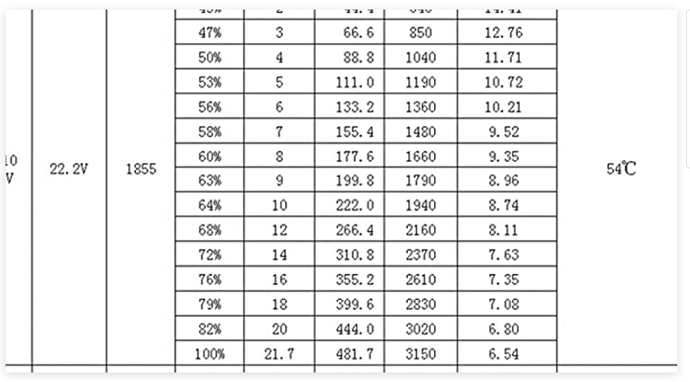 The batteries I have looked at are the Sanyo NCR18650GA 3450mAh 10A Battery. They are rated at 10amps max draw which is a 3c draw…so I think it falls in line ok

Exciting to see the development and integration of Li-Ion batteries. In the past, this was not possible due to the low C-rating of Li-Ion batteries and the large current draw from multirotor aircraft. However, now that multicopters are as efficient as ever and Li-Ion batteries has matured - the pairing of both technologies should provide for some insane flight time/range.

Although most of your analysis regarding Li-Ion is correct, I wanted to touch up on the C-rating of a battery. A C-rating is an industry standard that is used to define the max amount of amperage that can be drawn from the battery without damaging it. Just like you stated, C-rating * capacity = max amp draw allowed. I think it is important to note that this is only a limit of current draw (amperage) and not energy storage (amp-hour). You mention amp-hour in your post so I just wanted to correct this. Examples as follows:

So, yes, if you believe that the amp draw will be too tight on a smaller pack then adding more capacity is the correct choice. This allows for more energy stored onboard (most likely higher flight times) and less stress on the battery. When designing Li-Ion aircraft I like to have my takeoffs to pull a 3C rating from the battery - with all other flight staying closer to 1.5C to 2.5C. Anything more may result in the temperature constraints you state.

As per charging, Li-Ion batteries are best charged at 0.5C. Thus, the amperage the battery is charged at is calculate the same way as the discharge rate. This means a battery will take just over 2 hours to charge - assuming your charger can support the 0.5C rate. This is different than most Li-Po batteries that can be charged at 30 to 60 minutes. Please take this into account when designing the craft for your mission.

When it comes to vendors, I would stick to the big three companies: Samsung, Sanyo, and Panasonic. All other vendors don’t have the same level of quality control, which can prove disastrous in the future. Also, if possible I would set a battery up on the bench and run a 3C sustained discharge on it to see what the cell temperature looks like. This can be done by taking a singular Li-Ion cell and running a sustained 10A draw from it.

If you need any more help - let me know! Also, I am linking below the two interesting batteries that I mentioned in the other post:

These batteries use a completely different battery chemistry that I am not familiar with. So, I don’t know how valid their claims are. I know if you contact the company they can provide a full testing and specifications document.

When it comes to estimating if a Li-Ion battery can support the amperage of your bird - I would recommend the following. This assumes that the aircraft is already built - so I apologize if that is not the case. I would still do this, however, before integrating in Li-Ion batteries.

I like to leave 20% of headroom between the max observed amperage and allowed battery amperage, but have seen aircraft with less than 10% headroom. I understand that this process is a little lengthy and cost a bit more (as you have to buy a LiPo pack), but I think it results in the safest way forward when using Li-Ion batteries.

Ricky, totally agree with your reasoning, however there are times when you might need a little more head room for pushing the stick hard, and I think that this is the difference, that’s all. A 3c rated vs 10c rate.
Ps, all typing is done in one hand…

Hi @manavgandhi17
Loved your explanations, much more elaborate and articulate than mine and very informative.

I actually been looking at those foxtech diamond batteries, the specs looks amazing.

The only issue for me is that my X8 is designed for two bat packs (25600mah total) with a total weight equals to that one diamond 22000, and for now they only have two capacities, bummer.

Hey Gal. I agree with you. So here is what I have done. I reached out to the Batmon team to ask for their input. They are battery experts, I provided them with the technical information for my build and asked for their input. I am using their Smart Battery monitor in the design so need to take that into account.\BATMon Kickstarter - Add Smart Battery monitoring to a non-smart battery
I want to order batteries soon so I want to get a better uderstanding on this soon.
Your thoughts and input are greatly appreciated @manavgandhi17 thank you as well. The more information the better.

We are also using Li-Ions on some builds. 4S and 6S. Sometimes we have issues with magnetic interference and wonder, if we have somehow to ‘envelope’ Li-Ions for reducing magnetics.

Magnetic interference. Wow never thought of that being an issue. I suppose you could use MuMetal on the battery. MyMetal is an awesome magnetic shielding. But it’s expensive and adds a bit of weight. I have used it a number of times but only on small items like a shield over some power leads near a compass. There is also an RF shielding, its a bit lighter but it’s not anti magnetic.

But with LiIon batteries you have to consider that, due to their form they have a large magnetic interference.

I think there was one case where the compass would have a 45 degree offset after a battery swap. The cause was that on LiIon battery pack had a different orientation.

Well the magnetic affect will need to be taken into account. For the drone I am thinking of using the battery on. I have a Zubax GPS and compass with the GPS and compass shielded from below. Between the GPS/Compass and the frame is a ground plane with RF and Mag shielding.
But with out a built battery I have no idea if that will help.

Lithium is not magnetic because it’s a alkali metal. Adding magnetic charge to Lithium itself will not do anything. Inside Li- Ion batteries are also and Carbon which is Propylene carbonate. … And also fridge magnets , this are weaker than Neodymium magnets , so it will not damage your Lithium Ion battery for sure.Jul 29, 2019

Great post. By the way, I moved a picture to the top so it’s visible when viewed from ardupilot.org

A couple of gotcha’s that’s worth looking out for:

On the other hand, if you make them with a built-in BMS (Which I recommend!), all you need to do is plug them in when you get back. You don’t need to babysit them like li-ions and the fire risk is much much lower.

Great Info @Implicit. I just had a quick question about your point regarding the ESC cut-off voltage. I understand that the minimum voltage of a Li-Ion pack is much lower than an equivalent Li-Po pack - but don’t get how this would effect the ESC cutoff voltage. Unless I am mistaken, the ESC shouldn’t really care (besides increased amperage) if it is receiving 18V from a 6s Li-Ion pack vs 21V from 6s Li-Po pack.

Can you elaborate more on the the low-voltage ESC cutoff that you mention? Are you assuming that the ESC is programmed to cut off at under 21V (for a 6s setup)?

Because typically the voltage cutoff on an ESC will set somewhere between 3.2-3.5v/cell, You’re then flying along with your new li-ion pack, thinking that you can safely fly to 3.0v/cell, hit ESC cutoff and your copter falls out of the sky.
Some ESC’s will reduce power at the cutoff, other will, well, cut off.

Ah I see, very interesting. I did not know that ESCs monitored the v/cell and used that value to estimate cutoff voltage. So I assume the ESCs are just taking the total battery voltage / number of cells and then using that value to estimate the v/cell. One question - how does this work with racing drones that often see large amount of voltage sage during large changes in throttle? I have seen 6s racing drones dip voltage down as far as 17V during a rapid takeoff maneuver.

Most racers have to configure their ESC’s through BL_heli configurator anyway and likely disable the cutoff. I’m not even sure if mini quad ESC’s have it enabled by default, but most non-race ones will.
It’s been awhile since I configured my mini quads and can’t remember!.