Contribution of the Month

09:02am - Contributions of the month
Need people to add contribution-of-the-month labels

09:03am - Jani and industry
As a global leader in autopilot systems, how do we react to the brewing situation where many governments are now pushing all kinds of legislation that we need to have real-time-cloud-based systems where governmental agencies can check who is flying where?
DJI made some changes today
uAvionix has also posted something recently
Chinese government is pushing hard on these systems
They like real-time-data to “drone clouds”
USA have same sort of systems coming
Jani thinks we need to have these sorts of systems on our flight code
We are currently a market leader
Our position may get bad if we don’t follow these rules and regulations
Craig: isn’t it the manufacturers who are going to be on the line for this?
Yes, and they might move off ardupilot because of it
Tridge: this is kinda vague
Never flow DJI
What do they actually do?
Real-time-flight-data to different cloud systems
Locations
Registration codes
Id code of vehicle
Pilot license numbers
Yes, but is there a standards document?
JeffW
There are committees meeting in DC meeting to define standards ATM
Olivier
DJI
They have mandatory No-Fly-Zones
“Geo” is a software package where you can pre-authorize yourself by calling DJI
They will then unlock your vehicle to fly….
Whenever you power-up it connects to DJI in china if Internet connection.
They say this is for checking for updates
Olivier thinks DJI is pushing this transmission of data and want their system to be the standard
Nowhere near success ATM
To do this you need a GPS and hardware and stuff
This doesn’t work on non-flight-controller hardware (normal RC plane)
Chinese “drone cloud” interface:
https://web.skype.com/xmmfallback?pic=0-ea-d3-c167b24bd11ed6284d16c41cad869438
Nothing here can currently be implemented - not enough information
Can’t even do this considering data-on-minors laws in Australia and other places!
Need documents to base it on
JeffW suggests we need to get actively involved in the creation of the regulations
So we don’t get imposed upon with crappy laws
Have we been asked to add our input?
No
But lots of manufacturers have their own systems they would like to see adopted as standard
Regulators have said they’re not going to sole-source!
They’re not going to say, “you will go with vendor X
JeffW is willing to go along
ArduPilot will be happy to pay for this
He sat through a remote-id session
Various big names present
Presenting their options
Insurance-side could be interesting
test-lab/standards body (UL) Under-writers lab UL3030 is apparently a thing
https://standardscatalog.ul.com/standards/en/outline_3030_1

Timeline?
Less-than-4-months they will have draft documents
At least a year before things are mandatory
https://web.skype.com/xmmfallback?pic=0-ea-d2-ea73da8e851be9e61254f9d984883afb

09:24 - Welcome to JeffW and our newest partner company

09:24am - Randy and copter
rc9 went out
GPS fixes from Michael
No NMEA detection
EKF fixes
Blending GPS fixes
Beacon fixes were missed
Will go into 3.5.1
OF and RangeFinder fixes went in
Autotune using position hold fixes went in
Body-frame vs earth-frame issue
Probably do a release instead of another rc next week
We should keep old stable versions around
OLED display fix hasn’t gone in
PixRacer and DSMX/Spectrum problem hasn’t been addressed
Still waiting on a battery
Follow-up-point-release will fix this
New loiter is coming
Blog was done on ArduPilot.org including video
Much more responsive to roll/pitch
And brake
PR coming but
Affects quadplane and sub so they need to be looked at

09:32 - Randy and Rover
Pierre and Randy are doing some work on Rover
Visual odometry
Falls back to DCM when no GPS issue
Has to be forced
Skid-steering saturation fixes
When driving too fast
Architectural changes
Draft motors library
Randy has new hardware on the way
Meccano wheel support would be great!

09:34am - JeffW
Building a security detail Rover
6-wheel-skid-steer
Mars-rover suspension
Some comments:
Can they plot both sonars in ground station?
Yes says Randy
Pierre’s PR to use DISTANCE_SENSOR message
3rd Sonar to go on front of vehicle
Relatively easy to do!
Randy will point out where the changes need to be made


Tip-over detection
ROS integration
Adding the sonars caused the vehicle to turn around on the spot
The object avoidance was written specifically for the Sparkfun competition
It’s not a general solution
Just tries to avoid not stop
Probably a Sonar is tilted down too much
AP_Proximity in Rover coming!
Video coming when release is given

09:47am - tridge and Plane
Most of docs are now written
Lots of rewriting done
Tridge will push 3.8 doc changes when release is done
Lots of testing done on the weekend
Mixer-handling for px4 failsafe mixer broken
MdB: DID YOU FIX THE BUG!
MdB: Do we stop uploading bad mixers?
Elevon and vtail mixers rewritten for scaled outputs (and differential spoilers)
Set servo functions for left elevon and right elevon
Older elevon method is probably going to be removed and auto-conversion will be done
We’ve had many methods
Including transmitter-based
Demixing and then remixing!
Deprecated for 2 or 3 years
Now removed
Second method elevon-output/vtail-output method
Will probably be removed as sole use of pwm-mixing
Auto-upgrade to new method
Bugs in px4 mixer to do with elevons prompted changes
New beta was released yesterday
Will be another coming
Quadplane flying on weekend one of the forward transitions the vehicle rolled left
Should have added throttle when rolling but didn’t
Throttle_mix_max issue?
Several issues have been opened on Plane:

Hello to all, I had to switch to ArduPlane 3.8beta5 after several crashes that seemed related to a bug resetting integrators of PIDs on mode changes with ArduPlane 3.7.1, and solved in new betas. Everything is fine now but I have noticed a weird behaviour: I am trying to configure a Bormatec Maja airplane for AUTO missions, and everything works fine but in the middle of an automatic landing, I see a message in Mission Planner "restarted landing sequence to waypoint #" and the plane resume the …

09:58am - GSoC
Pierre has already been covered
Sebastian safe-return-to-launch
Prototype is running on PixHawk
15ms to run one of the steps “pruning step”
New flight-mode in the new case
Siriram
Present on call but unresponsive
Miguel is still making steady progress

10:02am - Olivier and documentation
https://mavlink.io/en/
Many conversations with people working on the documentation
But still no references to ArduPilot and other users of the mavlink standard
0.9, 1.0 and 2.0 were all managed by tridge
Issue has been opened

Pymavlink was split off as a separate project
Still points at qgroundcontrol as primary docs?
Could change that
We have our own mavlink repo which we attempt to keep in reasonable parity with upstream
Trying to keep life nice for Don, who is working hard on supporting everyone!
This is why stuff is pushed upstream
Definitely need to avoid having message collisions!
Need to add some pages on the history of mavlink
Randy will add that
Should we consider changing away from mavlink to APLink or something?

10:18am - Contributor of the month
Nomination for Jani for his work
Peter and DataFlash
Pierre and Rover stuff
Paul’s EKF stuff
The guy going through the generated code
Found a few things
PRs vs issues and questions finally got sorted
Paul is seeing a lot more interest from Chinese developers who are interested in EKF
50% of our users are from mainland china!

10:31am - Change in file extension
To .ap?
Tridge says perfectly possible to do
Could create symlinks from the .ap to .px4
Doing this would make sense when we stopped pulling in PX4Firmware
But that’s a long-term goal, no real pressure on for that
MdB is keen to get this done!
Proposal will be raised

10:42am - partners meeting tomorrow
4th of July
Time waits for no man
And neither does ArduPilot! 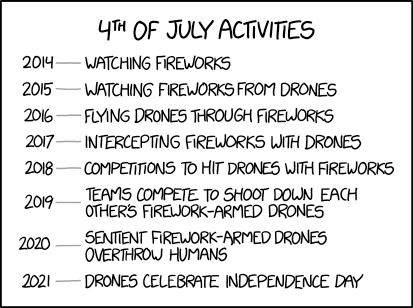 Strangely, they still celebrate by eating hot dogs. Since they don't have mouths, they just kinda toss them in the air and let them fall back down into their propeller blades. It's pretty messy.

10:45am - new marketing guy can help out with flyers and stuff at interdrone
Many years of experience
We have serious PR issues when the AUVSI guy doesn’t know who we are
Even though the last competition was blitzed by AP teams!
Sadly aperez was unable to get sound working this week!