Design and build of a coaxial drone 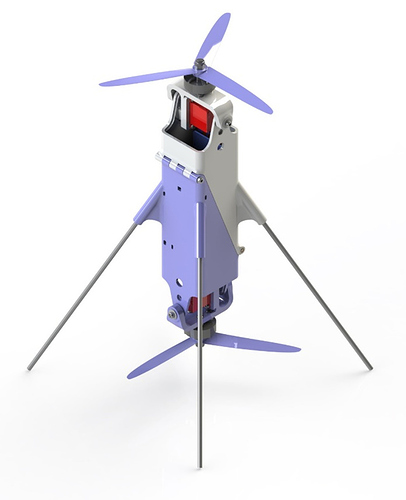 image643×790 51.4 KB
I’ve been fascinated by coaxial drones for some time now so I decided to design and build the simplest example of one I could. From the outset I’ve known this isn’t going to be an outstanding performer (I’m aware of some limitations and drawbacks of such a design) but decided to go ahead with it because, hey, there’s not too much else going on at the moment. I’ve also decided to make the whole project available for everyone to download, improve upon, tune better and basically just have some fun with. In the bottom of this post I’ve added a link which should give you everything you need to get to the same point I’m at now- CAD files, STL files, item lists, an assembly drawing, firmware and my initial (poor) parameter list.

Arducopter supports coaxial drones where the yaw control is provided by differential motor/propellor torque and pitch and roll is controlled by passing the downwash over control surfaces. However, I decided to go a different route and achieve pitch and roll control by independent thrust vectoring of the props. To pitch forward, the top prop is rotated with a servo about an axis above the COG of the drone, causing a forward pitching torque. Likewise, with roll, the bottom prop is rotated about an axis below the COG of the drone causing a rolling torque. All up there are just the four actuators- two motors and two servos. 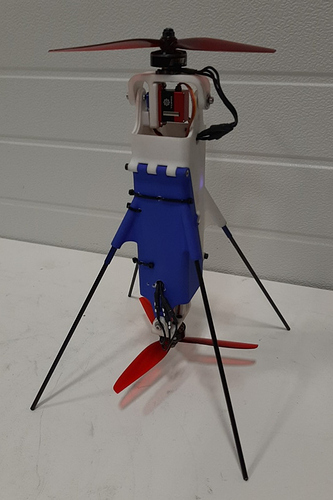 image585×876 124 KB
The drone was designed in Solidworks and made use of some components I already had laying around. The parts were 3D printed at Shapeways out of Nylon 12 material (“Versatile Plastic”). I’m quite proud of how neatly it turned out; almost all of the wiring and components are internal, including the battery. 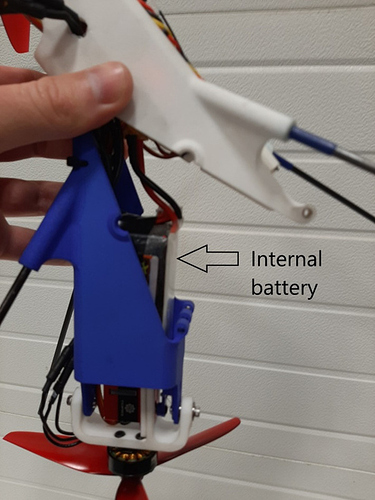 image543×724 117 KB
I decided to use the Matek F405-Wing flight controller because it’s almost perfect for this application. It has an inbuilt 5V power module for the flight controller, power and signal distribution for two motors and an in-built BEC for the servos.

Some questions that you may be wondering:

Excellent piece of work !
I am waiting for the flip video then

Nice design.I don’t know if you know this or not, but this is what we are sending to Mars August 2020. Similar concept.

It will only fly for I think 30 seconds "or 3 minutes (forgot) and that’s it. Very short flying life span just to collect some data.

Thanks guys. I’m very much aware of the mars drone, it’s a marvelous piece of engineering. Unbelievable it will be able to fly in such a thin atmosphere.

Weirdly I’m as busy as I’ve ever been at work at the moment but hopefully should have a decent video this weekend as well as the Solidworks files.

Looking forward for the progress of this project of yours

Looking forward to a new entry for https://ardupilot.org/copter/docs/common-all-vehicle-types.html - while we do have a CoaxCopter on there, this is… rather different

I love this concept

Thanks everyone for your support! Apologies I don’t have as much time to commit to this little project as I would like. I did however have time to do two batteries worth of tuning today with some mild improvements and will share some learning below.

With the tuning, I’ve noticed a few things:

Hopefully I can get someone to film some flights tomorrow, they’ll have to be indoors due to the wind here. I’ll be sure to post some if I do.

That’s a great idea and it had crossed my mind to add some wings and turn it into a VTOL tailsitter, unfortunately though I have no experience with fixed wings so perhaps someone else will turn it in to reality. I’d love to see it.

Thanks buddy. I will play with them.

How many parts will I be 3d printing? I will get my son busy

Tail sitter…hmm its on my list of projects. I am currently tied with 5 developments already VTOL (reg. not a tail sitter), Hexa Quad, Agricultural UAV x 2 and a Rover, Not to Mars but for my backyard

I know what you mean, so many projects and so little time… at least we have the awesome Ardupilot developers constantly working on the code side of things

LOVE ARDUPILOT TEAM!..such a great community. I wish I got involved in early stages…but its never too late

I will try to print the parts today and build it.

What size motors and props are you using?

But I’m thinking of going to a two-bladed prop with a more aggressive pitch (such as the APC 7x6E and 7x6EP) because they should in theory spin much slower for the same amount of thrust, reducing the gyroscopic forces and making the thing fly better.

Any advice on 3D printing so I get them printed right the first time.

Support or no support? what side should face down for bigger complex parts or you printed them in parts?

if you have the stl files, just upload them with correct lay down positioning. I use Cura for printing.