Bicopter - The journey so far 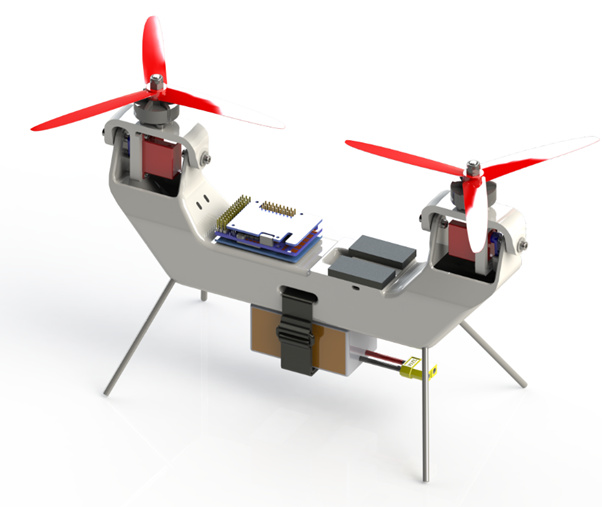 A little while ago I posted a blog about a coaxial copter design and build (https://discuss.ardupilot.org/t/design-and-build-of-a-coaxial-drone) that turned out to be quite the handful when it came to tuning. The main reason for the difficulties I was facing was the gyroscopic forces involved in tilting a motor/prop combination to do thrust vectoring. The next logical step was to move to a design in which these gyroscopic forces from one motor/prop are (mostly) cancelled out by equal and opposite gyroscopic forces of the other motor/prop.

The design I settled on was this bicopter, similar to a V22 Osprey, the layout of which is supported in Arducopter. The control system is pretty self-explanatory; to pitch forward, the servos tilt both motors forward; to roll left, the right motor increases in rpm and the left motor decreases; to yaw left, the right motor tilts forward and the left motor tilts rearward. There are some control characteristics which make tuning such a layout a little tricky though: 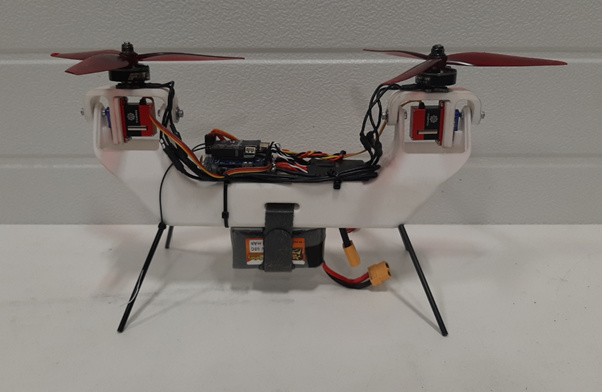 The design of this drone isn’t quite as polished as my previous efforts as I wanted to prove the concept out a little more first. However, I will still post all the files including 3d printable files, parameters and parts lists up to now here: https://www44.zippyshare.com/v/ud56Dksx/file.html

So far I’ve put about 6 packs through it and this is the performance I’m seeing:

Next steps will be:

That seems to be flying really well! nicely done!

Thanks Randy! This is an outdoor flight from today: https://www.youtube.com/watch?v=tsZDdXIjgkM

Understandably the pitch is proving by far the most difficult axis to tune - even with notch filtering on the system instability (25Hz) I’m not able to raise kP or kD high enough to get the tune very crisp. What I’m finding is that I’m having to run quite high kI values to compensate which is causing some unwanted behaviour, especially in dynamic or windy flight.

So next steps are:

Great to see bicopters getting some love!

I found lowering the GC as much as possible helps, this has the effect of ‘speeding up’ the servos. A smaller movement gives same amount of thrust vectoring moment.

Front and back ‘chinook’ bicoipter layout is not currently sported.

I looked into OAT a little, I suspect it wont work that well on a smaller scale due to size/weight of the props. If I recall correctly they can also the saturate gyroscopic effects and suddenly become a normal bi-copter.

Hi Peter, thanks for the feedback.

I’m still tossing up whether to go the OAT route, on the one hand as you’ve correctly said the inertia of the motor bell and prop is reduced at this scale, but the total aircraft inertia also scales down by a similar proportion.

Interesting point on gyro saturation; you’re right that no movement of the props = no gyroscopic force. I don’t expect that to be a problem though because the gyroscopic torque will just be in addition to the tilt-rotor torque and not a replacement of that torque.

Hi Jason.
Wow I found something that flies like a Chinook.
I cannot access the files and would like to build something very similar to your design.
Its the parameters and parts lists that I am most interested in.
I have seen Tom Stanton videos .
It looks like you are using a Matek board.

All the best. Regards Antony.

I finally got around to swapping out the fuselage to a OAT design with 30° inward angle of the rotors.

Initial impressions are good- I haven’t quantified the improvement yet but it is noticeable. In fact in my haste to get it into the air I had the props spinning reversed (left prop CCW, right prop CW) such that the gyroscopic forces were hindering instead of assisting the pitching moment. This produced very poor handling characteristics so the effect of the inward tilt is not negligible at all.

This is a short flight this afternoon. It’s a lot of fun to fly. https://youtu.be/5Hj3KNEjT-w

Hi,
I really like your idea! I am using your idea for inspiration for our own. How did you connect the servos to the rotary mechanism? and what components did you use for it?
Thanks!

@jasclarke308
hi, the file you upload can not download.can you upload to other place again?

Has there been any update to this project? I have a Bi-copter ducted fan I building and could really use some help as I cant get the motors moving properly like I need.

Hi, I’m also trying to build Chinook.
Is there any update to this project?
Thanks!

Hello, can the code be shared?

I guess I had better throw my hat in the ring as well, 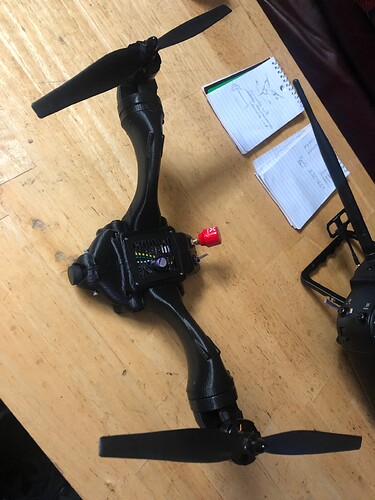 I am also having fun with a bicopter using flaps. 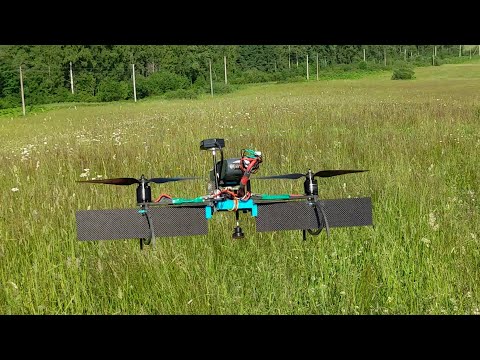 I’m currently fighting with a pitch instability, have just crashed it from some 30 meters because of that.

How interesting! My project is getting rebuilt this weekend as a result of a faulty ESC. I am converting the copter from betaflight to ardupilot while I am at it. I would love to take a peek at a working bicopter config to get some ideas. Yeah pitch stability seems to be a universal friction point I will be looking into that myself once my unit is back assembled (hopefully by Monday).

Regarding config - this is a nearly default one, nothing really serious to change. Compared to this one, I have decreased the yaw P&I a little because it slightly overcontrols, and the pitch P&I just a little.

Funny enough, the flapped bicopters need to swap the left and the right servos, as the default assignment is for the vehicles with side forces applied above the CoG.

The other thing is that the Copter’s code for bicopters is currently suboptimal with regards to pitch and yaw not being the function of throttle, as I found out here. I will try my hands on it a little bit later.

I am looking at your video closely and it seems there is a miscalculation occurring between the pitch of the body with relation to the gyroscopic forces of both rotors moving in the same direction…Would be interesting to pick through the logs on that specific event.

Now that I think about it the guys over at https://rcexplorer.se/forums/forum/everything-about-the-bicopter/ were also discussing a problem with aft reversal pitch behavior as well.

The log of the most of the flights from the video is here:

(hopefully I got the right link). If you point me to an effect I do not yet know, I will be very grateful.

Hmmmm, I am not seeing the final event in this log, what was the timestamp?