Copter-4.0.0-rc2 has just been released for beta testing and should appear in the ground stations’ “Beta Firmwares” link within the next couple of hours. The changes vs -rc1 are in the ReleaseNotes and also copied below.

Thanks very much to those beta testers of -rc1 that provided the detailed feedback we needed to get to the bottom of some of the issues above. Also thanks very much to the other developers who pitched in to help clear up these issues quickly and also sort out the wiki.

We’ve still got some known issues to investigate and fix so there will be an -rc3 but things seem to be going well, Thanks!

This also allows to not to interrupt landing on RC failsafe, it was almost two years this feature was initially introduced, great it is in master!
BTW is there a possibility to handle failsafe events in scripting? So user could customize FS action logic basing on FS type, home dist, altitude, etc.

SOLVED ok solved, i had downloaded the wrong firmware sorry

ok solved, i had downloaded the wrong firmware sorry

Failsafe changes:
a) GCS failsafe triggers when telemetry connection is lost (previously only triggered when using joystick)
b) FS_OPTION parameter allows continue-in-auto and continue-in-pilot-modes for RC/Radio and GCS failsafe

I tried setting it up to use dual gps blend.

The hdop value reports 655.3 and the arm does not work.

@sergbokh, we don’t have support for handling failsafes from Lua scripts but it’s on the to-do list. It’s unlikely to appear in the 4.0.0 release but perhaps as a point release in the future although I can’t really promise when exactly.

Lua scripts in master do allow changing the flight mode which will allow users to build custom failsafes. I.e. if something happens (like the vehicle going too far from home) the Lua script could trigger RTL or SmartRTL. I’m pretty sure the ability to changes modes will be included in a future point release (i.e. 4.0.1 or 4.0.2) because the coding is already done.

@rmackay9 any plans to backport FTP over mavlink support?

Anyone using FrSky passthrough telemetry?
I have sporadic issues since rc1: on vehicle power on @yaapu telemetry script on Taranis don’t get any data (but RC control is OK and the RSSI is also reported OK both by Taranis and by FC).
Restart of Taranis does not help. Only restarting FC could help.
I spent some time but didn’t found any stable steps to reproduce the issue. It is frequently but random.
I never had such issues on 3.6. Though its also possible a problem with my RC hardware.

“i) Yaw control fix for fast descent and after large attitude disturbances”: Note in my case the yaw was not related to altitude. tested today and yaw control on my y-6-b is working now but feels a little less responsive. I did get the props rotation a little during arming so i rebooted the battery and it was gone. Thanks everyone time to donate soon. PS never changed the motor that i was thinking the issue was from.

@sergbokh are you using a converter board with a max3232 IC?
When you say restarting the FC you mean power cycling or issuing a reboot via mavproxy for instance?

On the Orange Cube, the only way to have Passthru start is by booting with USB power, then plugging the lipo and unplugging the USB.
Haven’t tried 4.0 on anything else, yet.

@yaapu I’m using direct connection pixracer to r9slim+ SPort.
I do restart by power cycle but I will check if restart by MissionPlanner makes any difference.

Is this the same as the RPM filter in Betaflight, which depends on bidirectional Dshot in BlHeli_32, or something else? Is there a write up about the feature?

This is a thread to discuss harmonic notch tuning in Copter 4.0 including throttle-based, ESC telemetry based and my FFT harmonic notch PR. The current docs are here: And some some good existing discussions are here: @wicked1 @Paul_Atkin1 @bnsgeyer @anbello would it be ok to continue the discussion here so that we can collate people’s experiences?

Sorry @Anthony_Short I should have put in a bit more color. It uses BLHeli telemetry, but only over UART currently. Bi-dir dshot will be supported when we support bi-dir dhot

We’ve still got some known issues to investigate and fix so there will be an -rc3 but things seem to be going well, Thanks!

There are still two problems so far:
Navio Led turn Green at early startup then turn Off and stay Off…
Oneshot125 is not working: PWM out stay in the 1000-2000 range even if Oneshot125 mode (2) is selected.

I tested Stabilize, AltHold, Loiter, Save waypoint, Auto mode (did the pattern twice in Auto), RTL. 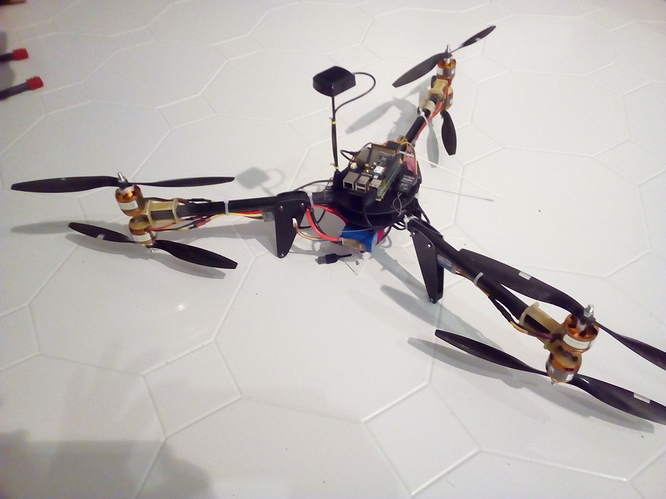 working fine here on pixracer 4.0.0rc2 + X4R.
Do you have an X series receiver to test with? I read about r9slims having issues with the s.port.