I have FRAME CLASS and FRAME TYPE to choose
In a 250 cuad, I suppose to set 1 in the two params?

@Hubertus_Paetow
Thanks for the information. Tried 921 and another wifi-adapter with the same issue. Perhaps its a problem of Win10 & MissionPlanner. On my android with tower no problems.
Rolf

its dont mean , but can be it reason. becouse y6A have other order of motors

same flip was happend in 3.3 when i set wrong select frame

The wifi issues aren’t an ArduPilot problem. If you read this long topic, you’ll see that other people also have problems and an update to the Wifi board helped. As I’ve said there, from an ArduPilot perspective, the wifi connection to the board is just another serial port, we don’t do anything different from a telemetry port.

I’ve flashe auav pixracer today with ac3.5rc1, one of the issues was that I wasn’t able to save any of the parameters via esp8266 bridge, flashed back ac3.4.5 and able to save params again. (I couldn’t save Arming Check 0).

@artemen,
Thanks for testing. I’ve reproduced the issue and added it as a to-do item to fix for AC3.5. https://github.com/ArduPilot/ardupilot/issues/5799

The same issue with Frsky telemetry… At least on pixracer. Didn’t have time to check OSD, but I anticipate the same result…

Frsky Telemetry is working for me. PixRacer to an XSR and on the Taranis no problem as with previous version. Using telemetry option “4” (Frsky Sport) in Mission Planner.

I am using frsky D with D4RII.
Went back to ac3.4.5 all is back.
Double checked all frsky telemetry settings an hour ago.

@Rolf (& others), Tridge and Peter Barker resolved the the Pixracer ESP wifi issue today so parameters load at the normal (fast-ish) speed. This will go out with AC3.5-rc2 which I hope to push out soon. The only final hold-up on -rc2 is I’d like to include the GPS blending but that needs just a touch more code review. If it takes too long then I’ll just release -rc2 without the blending.

I can confirm that the parameters load normally with PixRacer with today’s master.

Thanks Randy, Tridge and Peter for solving the issue.

I am unable to finish the wizard no matter what I do. Stuck at Step 15 of 16. if I click finish, nothing happens. I can go back a step. If I use the window “x” the window sill doesn’t closes. 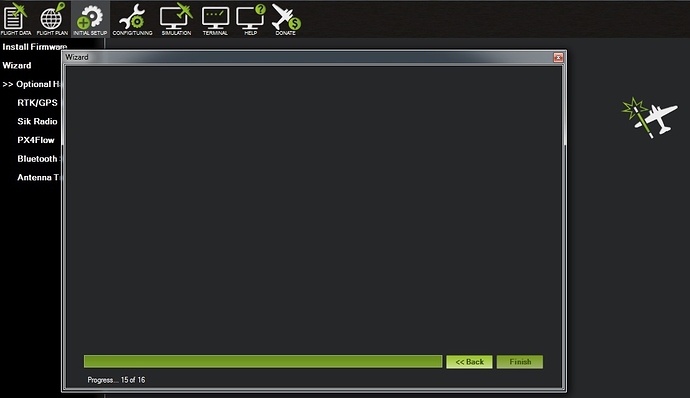 So I have a pixhawk that has bin fine I just uploaded the new version of mission planner and updated to firmware 3.5.1 (8ab1b3eb) I calibrated the mandatory hardware. I’m running a ecternal compass along with the internal one. I have ran the calibration for Compass sever times now. I keep getting a pre arm rc yaw not calibrated. What is going on? I have it connected by USB

hi,rmackay9,
Do you konw how the IMU&GPS offset works?I can’t find them in ardupilot.
thanks.