I believe I have found an Issue with 3.4rc1. On two different flights (.bins below) I have had an abnormal RTL response. During the first flight below, shortly after takeoff, I realized that I did not start my gopro. After switching to RTL, the IRIS+ increased altitude well past the RTL altitude setting, breaching the fence before finally descending to land.

On second flight, at end of flight during loiter turns (that I meant to delete due to proximity to road) once again I switched to RTL. As with the first flight, the IRIS+ immediately ascended well past fence breach. I was watching on telemetry, thinking the fence breach should bring it down… NOPE. Fence set at 120m. Altitude increased to 120, breach noted via telemetry, then 130,140,150… Past 150 I switched to loiter and brought it down on my own.

On both flights the rtl alt was 65m, fence set at 120m, and there was a rally point between the IRIS+ and home location.

I’ve looked at your logs and found the issue. We are adding the RTL altitude to the rally point altitude instead of navigating at the rally altitude. I’ve opened a PR to fix it (https://github.com/ArduPilot/ardupilot/pull/4327)

What do you think about the fence breach, or specifically that the breach did not stop the ascent. Thanks for all your work here.

It is up to the controller to respect the fence. Because of this bug the RTL controller wasn’t respecting it, that’s why it breached. The fence action is to RTL, but you were already in RTL… If it had gone to more 100m than the fence (so 225m), it would have switched to Land.

I did cancel the RTL as it was obviously not correct behaviour.

Something is really wrong somewhere!

Sorry you’re having troubles Henrik, but I think your issue is different and can be solved in your parameters. What is your RTL_ALT set at? Post a bin file for the most accurate analysis.

@lifepac.
Thanks for answering.
the bin file seems too big and zipped is 1.56 MB stops at 60% 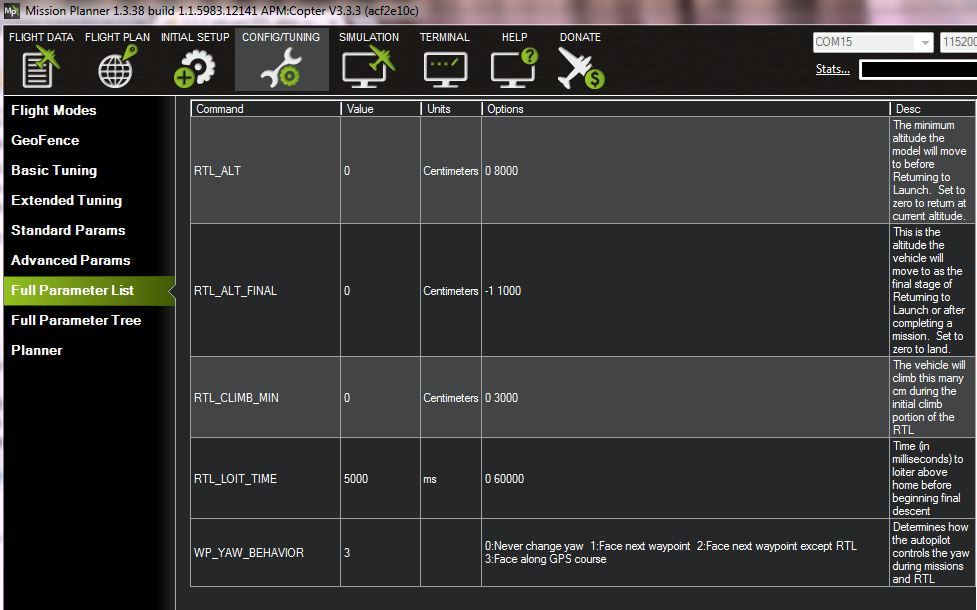 Your issue is an different version and certainly not related to this one. I saw that you have already opened a topic in the correct category so let’s not discuss your issue over here.

@henrik04 I’ve merged your thread here. Rally points work in stable versions of ArduCopter. Copter 3.4-rc1 has a bug, identified in this thread, that will be solved for rc2 (still not in master).

Now I am confused.

Michael_Oborne10h wrote:
rally points are not available on copter. I assume that’s what you re using. the next copter release should include rally points however.

I’m not sure why Michael said that but unless I’m confused with something it is supported:
https://github.com/ArduPilot/ardupilot/blob/Copter-3.3/ArduCopter/control_rtl.cpp#L124-129

Assuming the code in mission planner (1.3.38) is similar between moving base ( updating the home position for RTL and follow me)
My experience using RTL after using follow me:

This is confirmed if you look at the two screen captures above in this thread.