Been using mission planner for a few works now and its awesome (was a ex dji ground station user lol)!

My only ‘problem’ is that the drone wont keep the speed that i put in the survey grid option (in this case 35km/h = 9.5 m/s), but in the field the drone wont go even close to that speed, was always between 5ms to 7ms.

Already change the value in the WPNAV_SPEED to 10m/s, but the results are the same.

Is there any trick to get the drone fly in a more constant speed? at least near the 9m/s.

Another thing, see attach, the ‘‘use speed for this mission’’ in survey window what it really do? 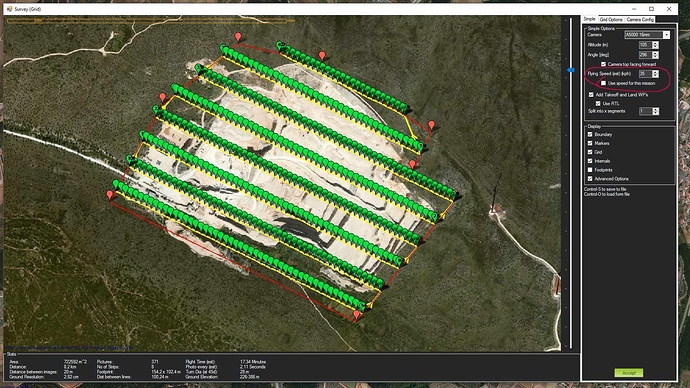 you need to tick use this speed. otherwise the number is just used to calculate the time estimates.

Michael Oborne thank you for the fast reply (and congrats on the good work regarding the MPlanner).

Today had another test:

Any idea what could be wrong?

The logs and the mission, if anyone can give a quick look, are in here: https://drive.google.com/drive/folders/0Bxn0zmjADHHVeUhwcENrNkdWQUk?usp=sharing

edit. telemetry (alot of remote noise) and rc radio going to failsafe because i’m still trying to find the best spot for them in the frame (tarot 650)

Pretty simple I think. Your max waypoint nav and loiter speed is set to 500cm/s. I usually set mine to 8m/s. Note that a 6m/s will fluctuate from say 5 to 6, never holding 6 perfectly.

X1Aero Thanks for the reply.

Well did some new tests today.

Funny thing is that in the RTL the drone was ALWAYS in 7m/s (400m from the last waypoint to home), the speed that i want it.

What could this be? Some Bug? Some parameter regarding the attack angle?

Gonna attach once again the logs if anyone wanna look at it: https://drive.google.com/drive/folders/0Bxn0zmjADHHVMTIxTFZscnJ0Rmc?usp=sharing

There could be a number of reasons if it’s not a simple fix like max waypoint speed… I’ve had problems with forward speed when flying large units (28’) props. I would get this pitching in the logs that wasn’t obvious to the eye in flight. Turns out the throttle min needed to be set lower. Basically the front drives weren’t slowing down enough. Check you RC out graph and see is your front motor are clipping at the low end (flattening out),

Can you give a look at the logs?

its too much for me to try to see that, i’m a newbie to understand some numbers @ the logs.

Should be this number in all waypoints?

This is the angle and % slope created by the difference in altitudes at each WP. If the WPs are at the same altitude, then they will be zero.

anyone can help me? same problem

Hi! I’ve some problems about ground speed in auto mode from waypoint to waypoint. sometimes it can reach to traget speed (12m/s) but sometime it can’t reach and fly with 6-11 m/s. What parameter should change in this case? PARAMETER :WPNAV_SPEDD = 1200 LOG FILE. https://drive.google.com/file/d/1LvI95rtb1hmCG525EopK0f5ECardJWb2/view?usp=sharing 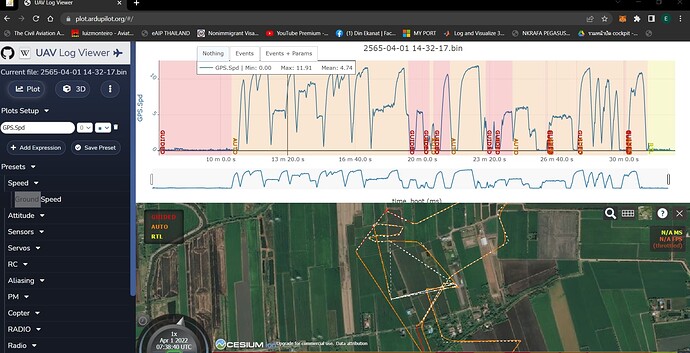 I already answered on your other thread.

Please do not hijack closed threads. And answer the questions I posted.