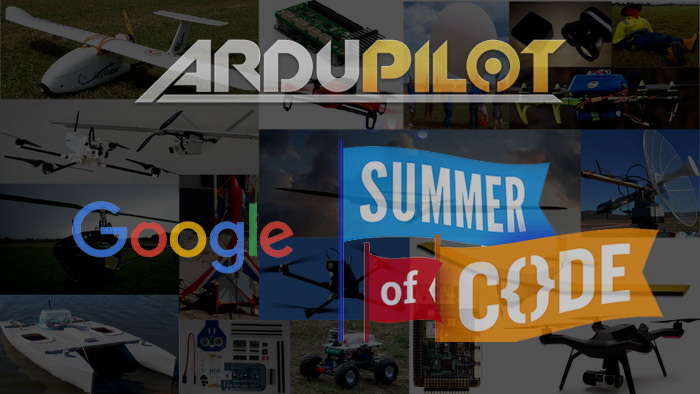 It’s official, Google earlier this week announced the Ardupilot projects selected for the 2018 season of the Google Summer of Code. This year we selected six students, congratulations to those accepted!

The projects selected are (listed in the same order as Google announced):

Dimitri is finishing his third year at the University of Chicago, and his experience with multirotors dates back to his senior year of high school.

Ayush is a prospective masters student at the University of Toronto at the Institute for Aerospace
Studies, and has been working as a graduate research assistant at IIIT Hyderabad. He also has been an intern for MathWorks on their autonomous driving system team.

Soubhi is a graduate research assistant at the University of Oklahoma, pursuing a masters
degree in Electrical and Computer Engineering. Last year, he worked at Optecks lab on
the OttoFly project, on a smart SDK for building autonomous drones systems.

Arnav is a third year year computer science undergraduate at the Birla Institute of Technology and Science, Pilani, in India. He has had a strong inclination for robotics, and has worked
on a number of embedded systems projects on the Raspberry Pi 3 at his college’s
Automation & Robotics Club.

Ebin is a fourth year undergraduate student at the Birla Institute of Technology and
Science, Pilani- Hyderabad Campus, in India. He is currently pursuing a dual major in
Electronics and Communication Engineering and Physics.

Sepehr is a PhD student working in the Autonomy Lab at Simon Fraser University. Last year he also worked on Deep Reinforcement Learning for the JdeRobot project.

Ardupilot received a large number of proposals, and the selection process was not easy. Here is more information about how Ardupilot went about it.

Our informal GSoC review committee, consisting of 12 volunteers from the dev team, ultimately received 58 proposals, and each was individually reviewed by at least two committee members and were assigned a grade. Scoring was based on the following criteria:

Following this, the top 10 highest graded proposals were discussed and final scoring averaged from 5 reviewers. The scores assigned by reviewers ended up very close, and we “starred” these proposals in Google’s proposal database.

At that time Ardupilot then submitted its “slot request” to Google. A slot is Google’s terminology for a project Google would accept to fund. Ardupilot followed Google’s general guidelines for the request, especially Google’s advice that the number of slots requested should be based on conservative estimates given a participating organization number of available volunteer mentors: Indeed, mentoring a student is a great responsibility and a very significant time investment for mentors, so it’s best to be conservative and be assured that all students accepted will be mentored with the attention they deserve. We requested 4 to 6 slots based our mentors availability (7 primary and backup mentors this year from the dev team, Randy, Tridge, Jaime, Peter, Pierre, Siddharth, Olivier) and were happy to learn that Google assigned us our maximum request, 6 slots, up from 4 last year. After knowing this and further discussion the committee then reached a consensus and selected the final top six projects.

First you should know that a non selected proposal does not mean it wasn’t a high quality one. As mentioned above there were many very good ones. And the fact that the selection was reached via consensus doesn’t mean the choice was easy. In fact it was a difficult choice for all reviewers, as several student proposals were very close in quality and score as the final six.

Finally, and of note: Ardupilot has reached out to some ArduPilot partner companies, enquiring about their possible interest to sponsor any additional students. So there may one or two additional students sponsored, students who if interested would go through a mentoring process in exactly the same way as the ones sponsored by Google. We should know more about this in the next few weeks if not earlier.

Sincere thanks again to all prospective students, from the Ardupilot team and community. And again, congratulations to the students selected!

Great Projects !!
Hope we will get regular project updates and please send requests for Beta Testers (I’m in ).

Good Luck to everyone