Last week I was doing some flying in some pretty cold weather. I think the coldest flight occurred while it was 7F/-13C. The aircraft I was using flew great all summer and hasn’t been flown much since then which is why it is still on copter 3.6.9. I expected worse endurance, which I definitely got, batteries were very unhappy with cold temps. What I din’t really expect was poor handling of the aircraft. Poshold worked okay after a bit, but right after takeoff and around the time I was first maneuvering the aircraft did not want to settle and moved around quite a bit.
The next weird thing was yaw once the aircraft was on mission. I noticed that it was off its heading about 30 degrees when starting its mission. The mission was a box pattern with around 1/2 mile legs. I tried to fix the yaw using my controller but it seemed to return to an offset position. This only got worse throughout the mission to the point where it was flying sideways. Strangely enough it seems like this behavior was desired by looking at yaw and desired yaw as they match up through the flight. But I can’t find anything that correlates as to why that was the desired yaw.
Vibrations were also higher than this aircraft normally sees but they weren’t severe enough for me to think that it was the cause.
Now I know the temp limit for the pixhawk 2.1 and the taranis x9d I was using are 14F/-10C but it was kind of the point of the flight to see what would happen in the colder temperatures. What I would like to know is what is causing the weird behavior other then it’s just cold and it did weird things.
here’s a log of the box pattern flight:

The cube has a IMU heater, did you give it a chance to heat up? Can take 20mins or so in the cold.

There was probably five minutes of ground time before takeoff. Isn’t the IMU heat info getting added to the mavlink stream in 4.0? It would definitely be helpful in scenarios like this.

Unsurprisingly here’s the difference in Gyro biases and IMU temps from a warm day back in July compared to last weeks flight. 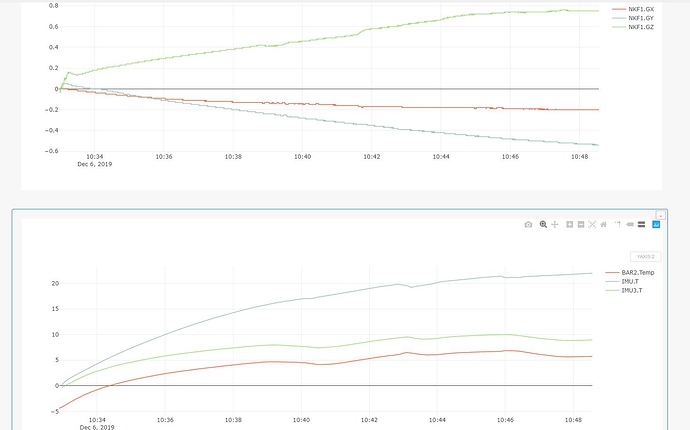 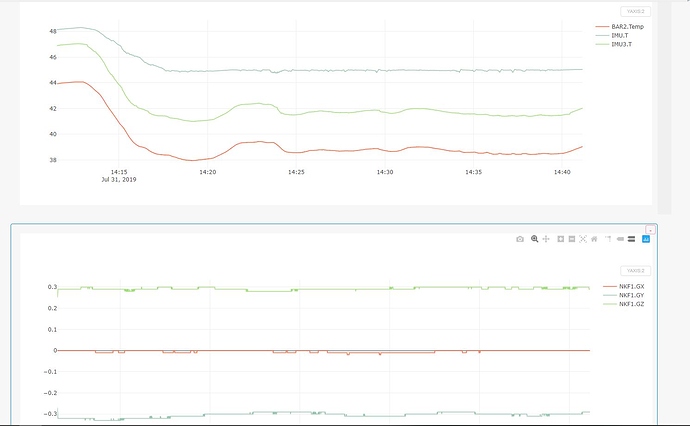 Biases are much more stable on the warm day. They don’t seem to stabilize at all on the cold flight which could be why yaw seemed to change throughout the flight.

Yeah, certainly looks like its not reached a stable temp in the that log, You can put it on USB power while your setting up, give it 20 mins or so then reboot. If its too annoying to wait you can lower the target temp so long as you re-calibrate acels and compasses at the new temp.

I’ll definitely give something like this a try, it’s currently -20F outside so it’ll be interesting to see how long it takes for them to warm up.

You were right, it took around 20 minutes for the temp to stabilize on USB power. The gyro bias didn’t really ever settle but it is extremely cold. Might try a flight soon.

Interesting analysis and graphs though. I learned something!

Seen this issue also, due typically cold winters (-25C). Also I have to point out that Cubes own heater is not powerful enough for that cold temperatures. Even as the cube was inside of an mostly sealed enclosure the small airflow cooled it down to about +5C from+45C in five minutes of flight and temperature fluctuates a lot during flights.

Also there is similar kind of problems with the mems compasses on cold weather.

Did get a flight in the other day, Temp was around -12F aircraft was preheated via USB. Our GCS laptop froze before anything else after being left outside for two hours, batteries were also cold soaked. Flight actually went fairly well, the aircraft flew as expected in PosHold, didn’t try a mission out as the battery voltage immediately dropped on takeoff. Seems like flight would be feasible in these temps with some insulated batteries.

I realize the flight time implications, but at these low temp extremes, an enclosure such as a canopy and a heater in addition to the cube’s heater might be needed to realize higher precision.

… Or even a peltier device with hot side on the cube?