First time posting here after reading quite a bit of your posts here.

We’re a student team from Stockholm who are building a UAV controlled by the PixHawk 4 and have stumbled upon some problems with the different flight modes. Here’s what we’re working with.

Images of the thing.

The behavior we want:

Pretty basic! We’ve achieved this stable behavior before with exactly the same parameter as are currently on the Px4. But, before our first test flight of the take off procedure we simple couldn’t get it to behave as before. Instead we got this behavior:

Here’s a video of the behavior

Any ideas and or tips are greatly appreciated.

Sounds like you have a issue with the trim position of your tilt servos. They should move to trim in all forward flight modes, manual is the best mode to test this in.

Currently the trim pwm is set to 1500. Isn’t this correct?

Also, the video has been reuploaded!

The trim should be set so that in forward flight modes they point forward, as I say try this in manual.

Looking at the vid they seem to be moving in the right direction, probibly just a issue of gains. you could try reducing Q_TAILSIT_RLL_MX we have recently reduced the default on master to 1.5 or 2.

Thank you for the tips, we’ll try them asap

According to one of our team members, who is in the lab still, changing Q_TAILSIT_RLL_MX doesn’t affect the planes behavior much

Appreciate the advice though

Today when I went by the lab and plugged the battery in the plane behaved as previously wanted. Later during the day it stopped behaving stable and we were back to square one. Is there a proper way to boot up the pixhawk? Very strange.

Merry christmas! If anyone has experienced similar behavior please let us know!

Hey, we figured it out and flew it!

Great, what was the solution?

We switched Q_TILT_TYPE to continuous from vectored.

We are now finishing up a tricopter setup, using another x8 body.

Will update the thread accordingly.

hum, that is odd, Q_TILT_TYPE should not effect tail sitters, can you change it back to confirm it was diffidently that.

We did switch between vectored and continuous to make sure it was the case and yes, the behavior did return. I believe that the fast change of direction in vectored mode caused our not so stiff body to oscillate. I might be wrong but that’s my consensus.

In continuous the tilt arms move much smoother and allowed for a stable hover. 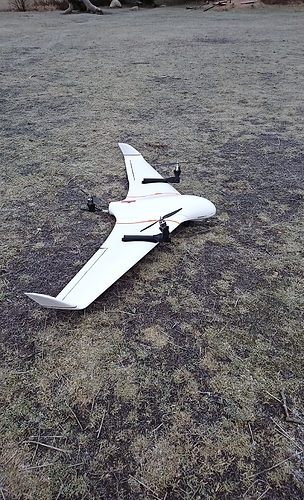 First test flight of this configuration we forgot to do a proper pre-flight check and the rear motor was spinning in the wrong direction… It flipped and we lost both winglets and a propeller. Always check motor/prop orientation!

Due to the bicopters sensitivity to crosswinds we decided on trying a tricopter set up. As we haven’t flown it yet we haven’t been able to test the differences but I will update the thread soon enough.

We’re a student team from Stockholm who are building a UAV controlled by the PixHawk 4 and have stumbled upon some problems with the different flight modes. Here’s what we’re working with.

We’re using a pixhawk 2.4.8 running ardupilot. This was wrong.

Are you running on 4s or 6s battery ?
You switch from px4 to ardupilot on this kind of frame, could I ask why ?

We are running 5s batteries.

We were always on ardupilot but somehow confused px4 with pixhawk 2.4.8… At some point after this was posted we considered moving over to px4 but never did due to time constraints.

We have now done test flights and have an issue with the plane not being stable.

Here are the logs from that day. https://drive.google.com/open?id=1Vcl8CaeY5srHi02yZrG7q7Dh0YdmtDcX