I’ve been flying temporarily with 4S batteries until I purchase a couple 6S batteries.

I’ve tried to autotune (starting with the default arducopter values) with the “autotune aggressiveness” set at the default value, as well as with the aggressiveness setting down to .05 (which I assume is as low as it can go?), and each time, the quad will fly in autotune for as little as 2 or as many as perhaps 10 minutes before tumbling and falling out of the sky. (Fairly calm conditions.)

What’s going on? Is the frame too light for autotune? Any suggestions?

Until some experts chime in,
have you followed these instructions ?
http://ardupilot.org/copter/docs/tuning-process-instructions.html

It might be your esc de-syncing. It used to happen a lot a few years back, specially in setups as yours, with a relatively large propeller in comparison to the motor.

Before autotune the signal commanded to the ESC are not that aggresive, but after autotune it probably sends “sharper” control commands to the ESC. The ESC tries to accelerate the motors faster than they physically can with such a huge prop and it de syncs.

I would say that is the problem. Which ESC are you using?

Thanks very much for that. While I’ve been using arducopter for several years, and have been thru the docs many times, I don’t think I’ve seen that page…yeesh…looks like lots of good info.

In the past I guess I’ve been lucky that whatever frame I was autotuning was far enough inside a “normal” flight envelope that the autotune always succeeded without incident. Perhaps now, with this latest frame, I’m out on the edge or even outside some flight envelope where tuning will be much harder?

I also had a HECK of a time tuning a small 250-size quad…actually never succeeded and gave up (other folks were also have a hard time establishing pids for those smaller frames).

Anyway, thanks for the link…I’ll dig in there.

That said I still have the general question…

Is there something about my quad that is known to be problematic for autotune? Or perhaps even better, does anyone have a decent tune for a frame kinda like mine that would at least give me a place to start?

As of now my frame flies with reasonable stability using the default PIDS, but it kinda wallows around and seems unsure of itself.

“De-syncing”…hmmmm…I’m not familiar with that or how to avoid it.

But the thing is, my props are not large in relation to the motors…I’m using Sunnysky 4108S 480kv motors:

I’m thinking 15-20 inch props are common with these motors?

The ESC is a 4-in-one, a Tekko 32, set to DSHOT 150 (esc settings are a bit of a mystery to me, but I think DSHOT 150 is a good setting…I had been on “normal”,as far as I can tell, all that changed when I went from “normal” to DHOT 150 was that my armed/idle speed about tripled…but is was VERY low on “normal”, so tripling is fine).

Could you provide flight logs? maybe there we can see something about it!

There’s a world of difference between a 15-inch prop and a 17-inch prop.
Even SunnySky lists a 15x5 as the maximum allowable prop on 4S. And if you’re looking at 6S, 12x3.8 is your biggest, with heat issues at max throttle.
Prop size aside, the 4-in-1s are prone to overheating and thermal throttling. Even with independent BlHeli_32 ESCs, asking too much too fast from these postage-stamp-size ESCs leads to throttling down, and unpredictable copter behaviour.

I have flown intensively BlHeli, _S, and _32 with 12-16 inch props. That flat 15-inch prop called “DJI S800-style” is the biggest I’m comfortable with. A T-Motor 15x5.4 in its place leads to ESC overheat without serious heat-absorbing aluminum sinks. Not worth the weight penalty.

Those small ESCs perform well in the 5-inch world. Not that much torque needed to accelerate a tiny prop… 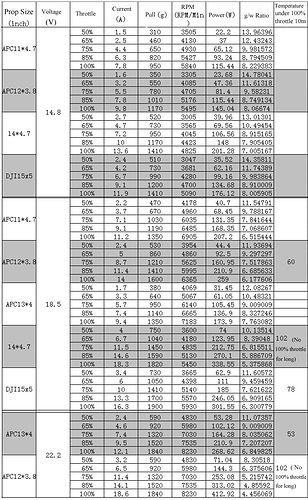 I actually haven’t had an SD card in the Kakute F7 flight controller…I’ll put one in there before my next flight.

OK…interesting. 15 is the max, and smaller on 6S? I would have thought the opposite is true? The higher the voltage, the larger the prop?

Anyway, I had run all my motor/prop parameters thru eCalc before building, and I didn’t get any warnings…but then again yes, I see that 15 is the largest recommended.

When you see builds running 6 or 12S and large propellers, pay attention to the size and kV of the motors. Both are important.
I’m running the same low amps - 3A per ESC average - and the 60A Wraith_32 Metal v2 heat up to thermal throttling after some sporty flying.
The S800 prop was just that. The S800 prop. I don’t remember, 8 years ago, DJI advertising its pitch, because there was no alternative offered. And it’s reasonable to assume that cloners didn’t run the prop profile through specialized software to compute its actual pitch. To my naked eye, it looks below 4.

Wow…I would have never expected an esc being flown well below it’s amp rating to get anywhere near thermal throttling. Huh.

Yes, I’m talking about the original non-folding S800 prop. The copies are 13$ a pair in China, and are labeled both as 15x5 and 15x5.5, but 15x3.8 looks right on the money comparing them to, say, T-Motor clones.
It’s a fantastic prop. The low pitch keeps your motor in a bit higher rpm, and the torque needed to accelerate it is less then other 15inch demand.

Regarding the ESCs, the BlHeli_S and _32 are geared towards high-rpm/low-torque applications - the racing quads. That they work at all in low-rpm/high-torque environment of pancake motors and 15-inch props is a bonus, not a given.

A bit more expensive, but the T-Motor MS1503 are excellent lightweight and strong props.

OK…I finally get it…the prop size decreases as voltage increases because of the POTENTIAL to overdrive the motor, right?

So OK…in my case, with such a lightweight AUW, and if I’ll always be flying relatively gently, I’m thinking I’ll drop from 17-inch props (more because of the possible desyncing issue, as opposed to over-driving the motor) to 15-inch props.