Auto Takeoff and Reverse Thrust not working after upgrading from 3.7 to 3.8

I was using the PIXHAWK 1 on a RVJET on Arduplane 3.7, it was working great, I decided to use reverse thrust as the RVJET has a very good gliding ratio and I was having trouble landing in small areas. I configured it successfully (including an SF11/C) and was landing well, probably up to 30 m past the target point.

I read the release notes for the version 3.8 and saw that one of the things it provided was increased landing accuracy, so I decided to give it a shot, however, after the upgrade it stopped performing auto-takeoffs and using reverse thrust at landings. (I found a similar topic: https://discuss.ardupilot.org/t/tkoff-thr-minacc-and-tkoff-thr-delay-doesnt-work-together/19928, but decided to start this new one as I’ve also noticed it affecting the reverse thrust and I can’t confirm yet if changing one of TKOFF_THR_MINACC or TKOFF_THR_DELAY will correct the issue).

I followed the upgrade guide (had to adjust elevon settings) and it did not have anything specific on these matters, but I even checked the parameters and did not find anything that could be the cause of this problem. On the GCS it even said the acceleration and waiting time to arm, but it did not arm (at least it did not spin the motor).

I tried several takeoffs and it spun the motor on one instance, but according to the log it was after triggering the next waypoint (loiter_to_alt):

On the other successful takeoff I switched to FBWA as it didn’t arm, gained speed and height and then switched back to auto mode.

In neither of the landings did it use reverse thrust and went well beyond the target point (about 120m).

I uploaded the logs to my google drive, they can be seen at:

Please let me know if the tlogs can be of any use, but I think the BINs are better.

Thank you all in advance for your attention and help!

About reverse thrust on AP3.8, did you watch this post ?
https://discuss.ardupilot.org/t/arduplane-reverse-thrust-setup/18324/3

I followed the guide and it was working successful on 3.7, my parameters are:

To avoid issues on Manual mode I set my RC to send only values between 1500 and 2000 to the FC. This way I can’t reverse thrust in Manual, which could cause a disaster.

Thank you for your contribution!

No, it is not, neither reverse thrust nor auto takeoff.

Hi,
I founded something interesting about reverse thrust. Parameters has changed on this page :
http://ardupilot.org/plane/docs/parameters.html#use-rev-thrust-bitmask-for-when-to-allow-negative-reverse-thrust 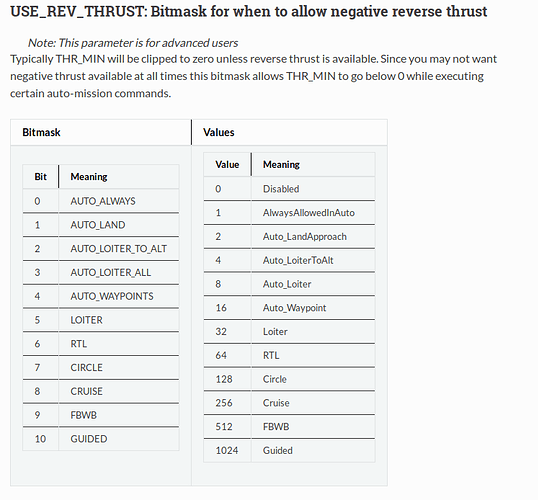 So using reverse thrust for landing is 2 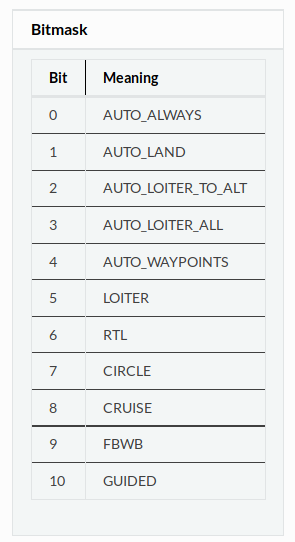 Mission planner 1.3.49 display informations on the first screenshot like fbwb : 512.

Should we now consider Bitmask or values to enter, that is the question !

I’ve got a successfull working params for reverse thrust on AP 3.6 :

I will try tomorrow on 3.8. But why values were removed from documentation ?

So do we need to set “2” now for only landing approach (only)?
The arduplane doc is not updated. I have “1” set now and it is using reverse in auto always. I was just about to post asking why.

Hi all. These docs and functionality have not changed since the initial release. However, the docs could use some better explaining. I chatted with @tridge with it and he will re-explain it on the wiki. Stay tuned!

Works well with me. Thank you MagicRuB and Tridge. Reverse thrust is amazing. Without rangefinder or lidar. 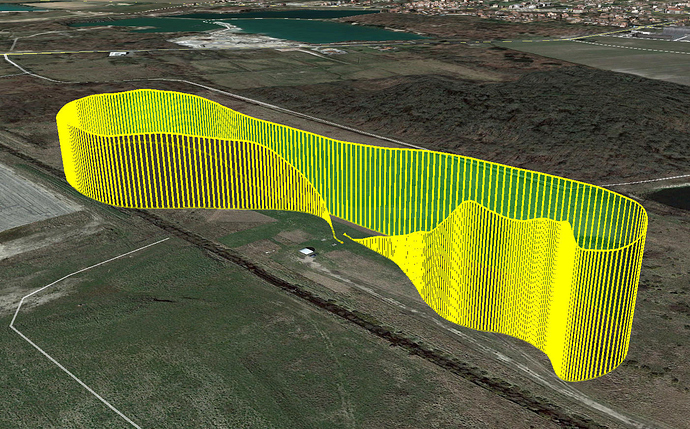 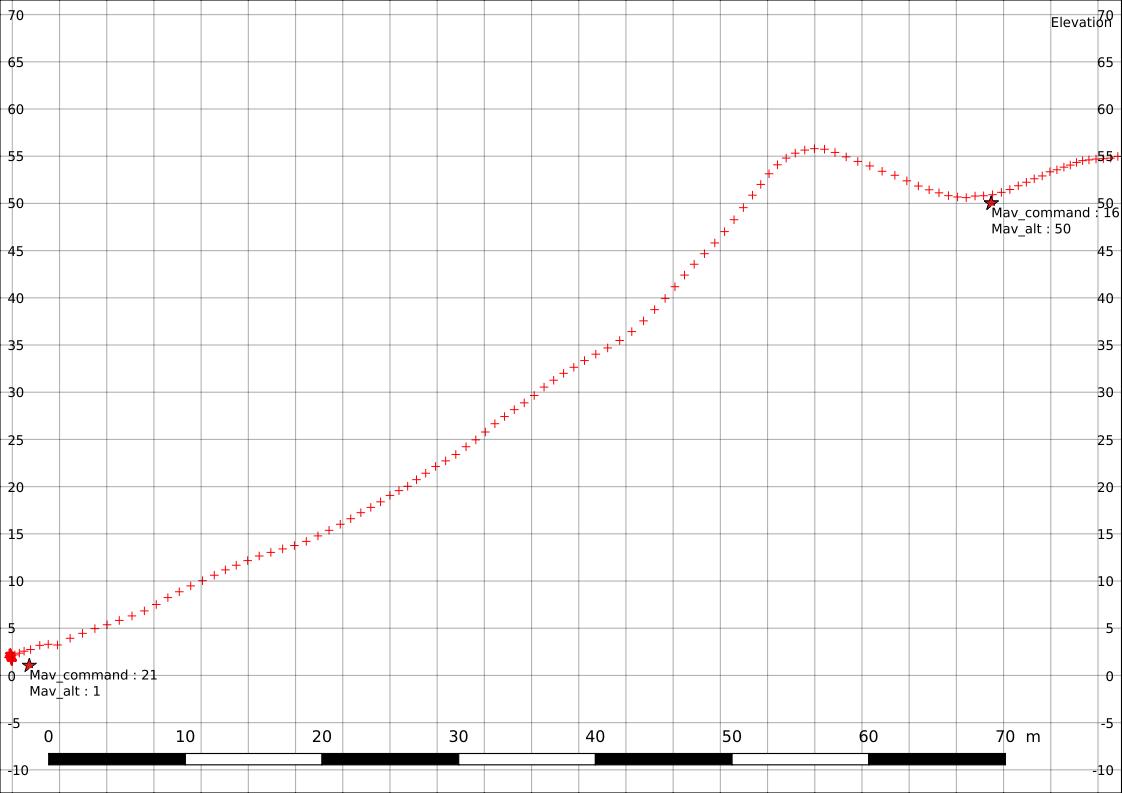 Thank you for these details. Takes out the guess work

Was wasting a lot of energy on loiter to alts, before this.